The art of the director 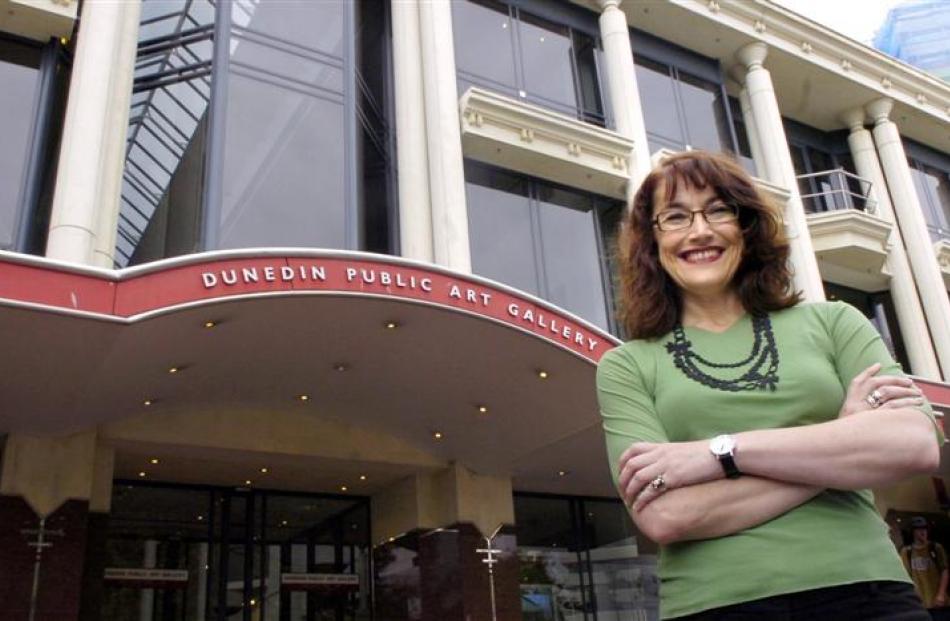 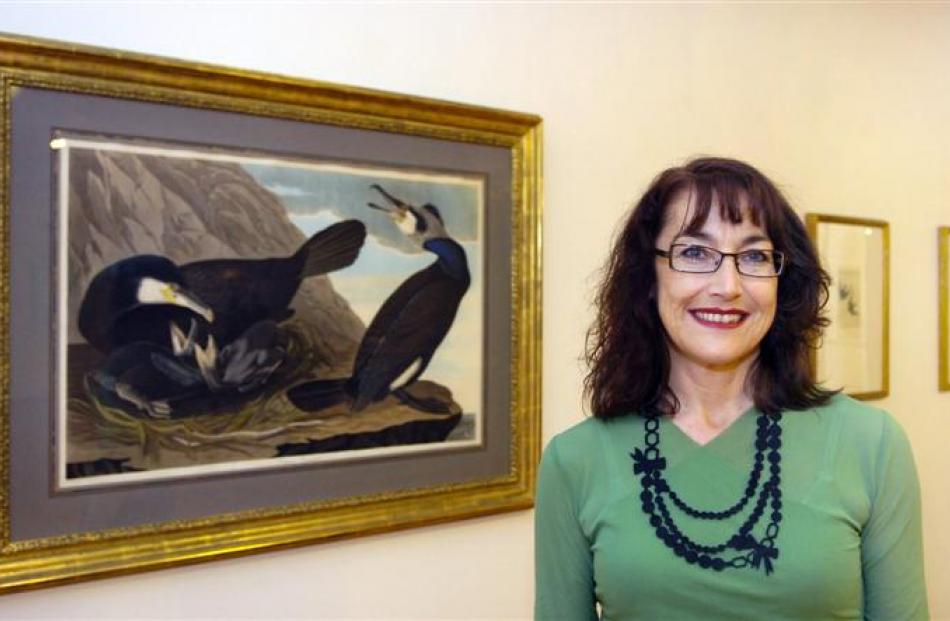 Elizabeth Caldwell at the Dunedin Public Art Gallery. Behind her is John James Audubon's 'Common Cormorant' , an 1835 aquatint on paper gifted by Mrs Edi Allshouse. Photo by Jane Dawber.

Dunedin's cultural institutions, the Dunedin Public Art Gallery and the Otago Settlers Museum, were until recently corralled together under a single director. That relatively short-lived experiment in centralisation has ended with the appointment of two new directors, one for each. Charmian Smith and Nigel Benson meet them.

For more than a year, the Dunedin Public Art Gallery has bobbed along without a hand on the tiller. Now it finally has a new director and a new direction. Nigel Benson meets Elizabeth Caldwell.

One of the most drawn-out sagas in recent Otago art history ended earlier this month, with the arrival of a new Dunedin Public Art Gallery director.

It had taken more than a year - 15 months, in fact - to find a replacement for her predecessor, Priscilla Pitts, who was also director of the Otago Settlers Museum.

It was advice anyone involved in Otago art could have profered quite readily for the price of a glass of chardonnay.

And to Caldwell's credit, she doesn't shirk from talking about the controversy.

"I think it's a good move, especially with the redevelopment about to happen at the settlers museum," she says.

"They're both incredibly good institutions, with great collections, but quite different programming."

Ms Caldwell beat 13 other applicants to the position, and her appointment has been welcomed by Dunedin City Council community life manager Graeme Hall.

"She has a huge understanding of the art world and has very good experience in a number of institutions," he says.

Ms Caldwell says she has a vision for the gallery, but that it's too early to reveal it.

"I do have a vision, but it is a work in progress, because the gallery is doing a great job. The gallery does everything well. It has a fantastic collection, talented staff and a supportive council and community. That's a dazzling combination," she says.

"There's always such a lot on at the gallery. The Rita Angus exhibition did very well. It has the schools programme. There's also a strong external element, such as the visiting artist programme, which is one of the gallery's strengths.

"It's being used very well and that's really gratifying, so I don't want to rush in and change things. I want to meet lots of people who are interested in the gallery.

"I want to maintain and expand those relationships, have dialogue and hear what people want from the gallery. 'What are we doing well? What would you like to see in the future?'

"From that, a new strategic direction will emerge," she says.

"Coming from outside, I probably can see some things that need tightening up and could do with a few things. The whole point of the Dunedin Public Art Gallery is to showcase collections - using it. It's a wonderful asset to have a public art gallery in the middle of the city.

"You know, I remember going to the art gallery when it was at Logan Park," Caldwell muses.

"Now, every day, people around New Zealand come on the website if they can't actually physically get here.

"The annual attendance at the gallery far exceeds the population of Dunedin. What that tells you is it has a strong repeat base and that's a healthy position to be in. We're well up on our projected figures for the year," she says.

"I'm delighted to be given this opportunity. Dunedin is an extremely well-known and highly respected art gallery. It has a very good reputation and profile. It's one of the top places in the country to work. The gallery commands enormous respect through the creative sector.

"I want to champion how well we do things and I want the rest of the country to know that."

Caldwell became well acquainted with the DPAG in her role as visual art adviser with Creative New Zealand, from 1998 to 2006.

"So, I knew before coming here elements like the visiting artist programme, the Rear Window, and the Big Wall. They're all wonderful strands," she says.

"The gallery also has a strong history in publications, so it's got that winning combination; marvellous collections backed up by presentations."

She also mentions the gallery's collection of British and European paintings, many of which were given by benefactors or purchased by the gallery's founding organisation, the Dunedin Public Art Gallery Society.

"We have works by great artists here: Monet, Constable, Turner, Gainsborough . . . it goes on and on," she says.

"New Zealand artists like Frances Hodgkins, contemporary artists like Rita Angus and Jeffery Harris and McCahon, to a living treasure like Ralph Hotere. You also have sculptors like Steve Mulqueen and extraordinary jewellers here.

"Dunedin's a wonderfully creative city and it always has been. The respect it commands throughout the country . . ."

Caldwell is passionate about the quality of New Zealand art.

"You would love New Zealand artists to go overseas and look at other people's artwork, so they can see how good we really are," she says.

However, she believes it will be an interesting year for the arts industry with the predicted recession.

"Everybody in the cultural sector is thinking about it. But arts often continue to flourish, even in terrible times. Arts is well-practised at running on a very tight budget, being imaginative and focused in the use of resources," she says.

"It presents the gallery with challenges and opportunities. It's an opportunity to attract new audiences and to diversify and grow our audience base."

And what of Ms Caldwell's own taste in art.

"I'm quite eclectic. I like all kinds of things, but I suppose I have catholic tastes, really," she says.

"I like both the historical and the contemporary, representational, figurative work through to abstract, conceptual and quite minimal work. I also like the decorative arts and, particularly, contemporary New Zealand jewellers. What places like Lure are doing is impressively good. I'm really interested in what other galleries are doing around Dunedin, too."