Boutique hotel made to order 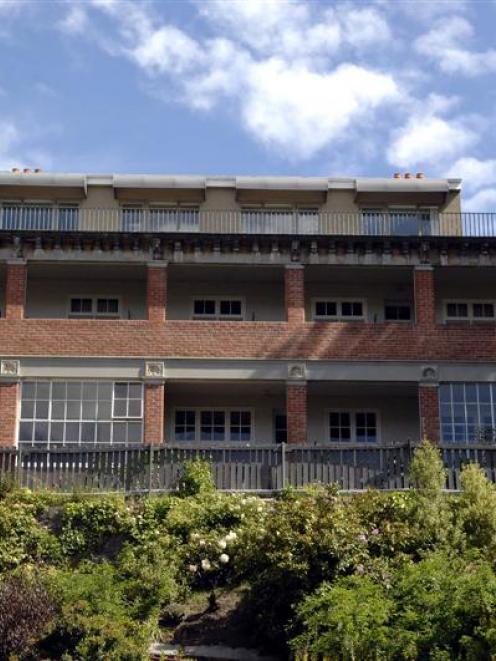 More than 300 members of the Christian Brothers order lived in Rattray St over 129 years, many in the grand residence that is now a boutique hotel.

The first brothers arrived from Ireland in April 1876, to teach at the neighbouring St Josephs Christian Brothers High School.

It is reported the four - Bros Bodkin, Dunne, Healy and McMahon - "were met by Bishop Patrick Moran and a group of Catholics and driven rapidly to Dunedin where, at 11am Mass, they were introduced to the people".

The four lived in a wooden house which was replaced by the larger, red brick building in the early 1920s.

Founded by Edmund Rice in Waterford, Ireland, in 1802, the Christian Brothers Order opened schools in Melbourne and Brisbane before setting out for Dunedin at the request of the first bishop of the Dunedin diocese, Bishop Moran.

They were also surrounded by several other Catholic buildings, including St Joseph's Cathedral, St Joseph's Hall and the Bishop's residence, and they commuted to St Edmund's Primary School in South Dunedin after it opened in 1949.

Br Graeme Donaldson, a former teacher and prison chaplain who lived in the house for almost 20 years, says the main thing he missed after moving out were the "million dollar views" of the harbour and peninsula.

When the new millennium was celebrated with fireworks on the harbour, the brothers in-vited fellow clergy from neighbouring parishes to watch from the top balcony.

He also recalls that the order rented out an old house next door, initially to "reputable" students, such as athlete Dick Tayler, but "bikies" later "got in".

"I was community leader then.

"They used to make a dickens of a row and one night a rifle shot went off."

After evicting the tenants, the brothers pulled down the house and replaced it with a garage, glasshouse - and a barbecue.

"We'd entertain the sisters, priests and brothers from around Dunedin before Lent and before Christmas each year.

"They just loved being together and having a yarn . . . one year we had 42 barbecues."

The brothers' day began at 6am with prayers and meditation, he recalls.

Then, after morning Mass and breakfast, they went to their teaching jobs, often also coaching sport after school.

"Evening prayers and tea were at 5.45pm.

"Then there was your own study time and evening recreation - billiards, cards and snooker.

"Finally, there was prayers about 9pm."

At one time, they had to be in bed by 10pm and silent from then until breakfast, but that changed in the early 1970s.

"The thing I liked about it was the fun and games, and the camaraderie we had together as young male teachers.

But with fewer men entering the order, the huge residence eventually became too big for its occupants.

At one time, the property housed up to 13 brothers but by March 2005, when they moved to St Kilda, there were only four left.

Once a cloistered place in the middle of the city, the former Christian Brothers residence is now visited by hundreds of people from around the world.

"Our brief was to restore it as much as possible to what it was originally like, to keep the integrity of the building," Mr McMeeken says.

Although the bones of the building were good, it still needed to be replumbed, rewired with 2.5km of fire-protected cabling and strengthened to meet earthquake requirements.

There was virtually no heating - which was why the balcony on the middle floor had been closed in - and there were no ensuite bathrooms.

While the couple lived off-site to avoid the mess, the 15 bedrooms were upgraded into guest rooms, each with its own tiled bathroom, and central heating was installed, making it practical to reopen the second-floor balcony.

Unfortunately, though, the top level had been dramatically altered in the 1950s, with the loss of three dormer windows in the roof-line.

Restoring that floor was not feasible but the effect was softened with a new balustrade and awnings.

The McMeekens had moved to Dunedin for their children's education and were looking for a project when they saw the residence advertised for sale.

Mrs McMeeken admits she had never noticed the building before, partly because of the greenery in front but also because it is on a busy road that demands a driver's attention.

Like their guests, she enjoys being within six minutes' walk of Dunedin's main shopping centre and restaurants.

"One of the lovely things about living here is that we don't use the car much," she says.

"Yet, perched above the road overlooking St Joseph's Cathedral, the city and harbour, it is also "very peaceful".

The couple previously lived in Arrowtown, where Mr McMeeken, an ex-pupil of Bayfield High School and a former Contiki guide in Europe, had run a Milford Sound tour bus and a market research company specialising in tourism.

He says Dunedin's heritage, climate, schools, university and proximity to Central Otago, mean it has more going for it than any other New Zealand centre, but the city is at a "crossroads" and needs to capitalise on its competitive advantage.

Europeans, in particular, often book two nights at the hotel but end up staying three because they find much more to do in the city than they expected.

Christian Brothers and their former pupils also call in occasionally to have a look around.

One of the bedrooms is their former chapel, still with its original stained-glass windows.

Mrs McMeeken says they liked the building as soon as they saw it.

"It just had a lovely feeling from the minute we walked into it.

"Now we've got heaters, it's even better."