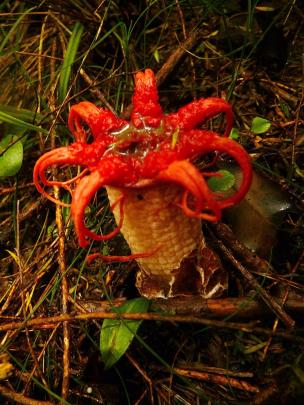 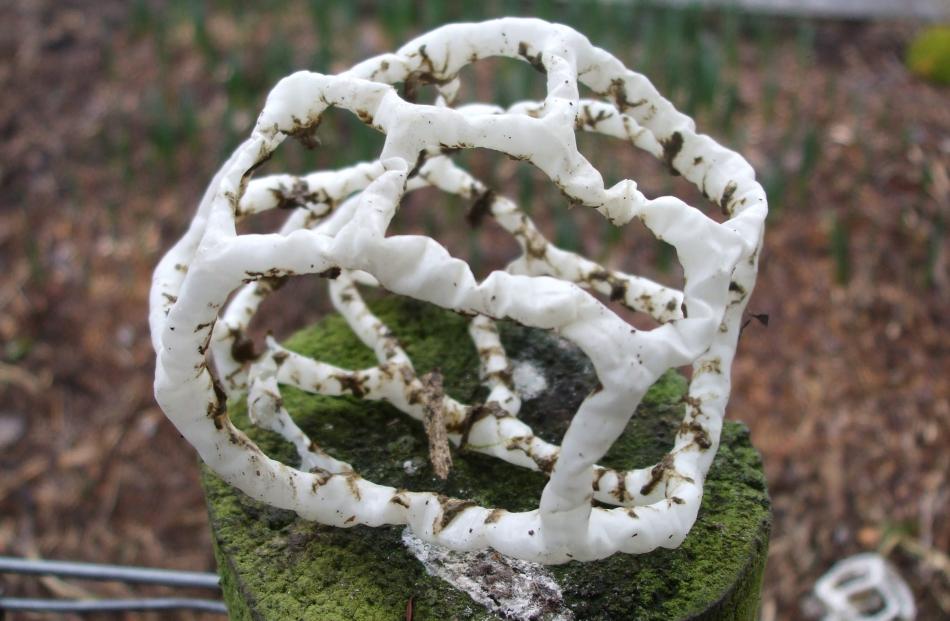 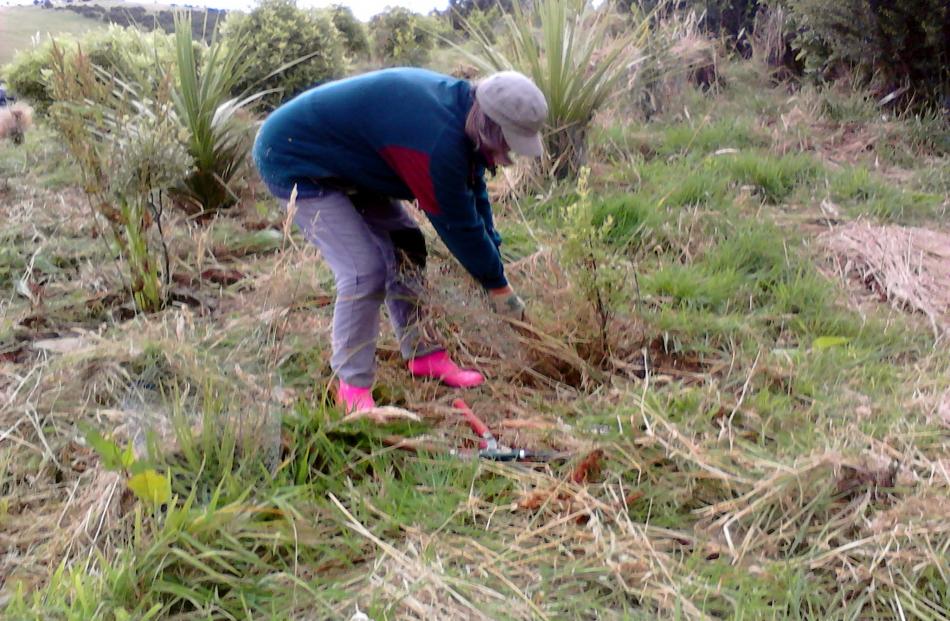 Maree Johnstone at work weeding around the Visitor Centre at Orokonui. Photo: A. Grant. 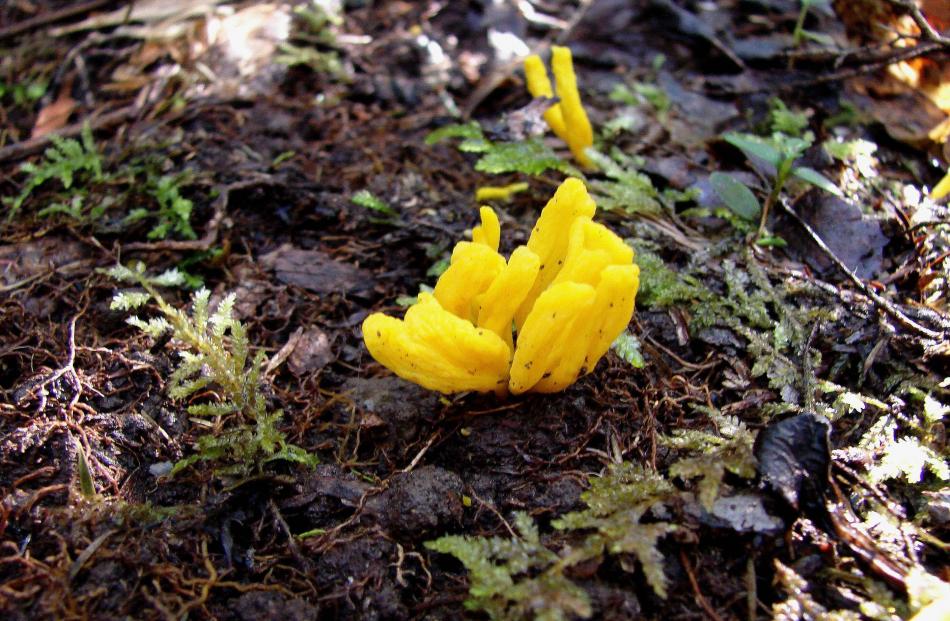 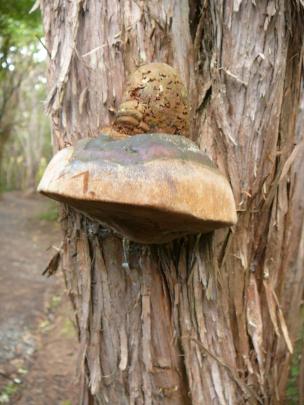 One of the many forms of bracket fungus. Photo: M. Johnstone. 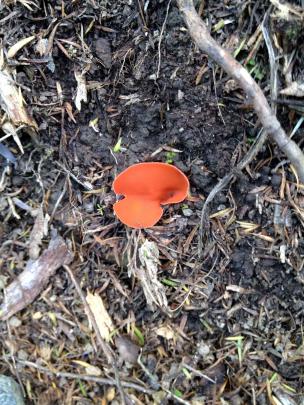 Orokonui volunteer Maree Johnstone delights in the magic of curious and colourful fungi she finds while working in the bush.

That’s weird, I thought, as I withdrew the fork from where I was weeding.

Attached was a white object similar to a small hen’s egg but without the shell.

Soft to the touch, when opened it revealed a mass of entwined structures.

On searching the leaf litter, I found more "eggs", one that had "hatched" but hadn’t fully expanded, and at quite a distance from the "nest" was a mature specimen.

Commonly referred to as basket or lattice fungi, their white bodies can measure up to 16cm across.

Inside the white mesh is a coating of a smelly brown substance (gleba) which carries the spores (seeds), these being distributed as the basket rolls free.

Commonly appearing after rain, they were called tutae kehua, or "ghost droppings", by  Maori.

My activities as a volunteer at Orokonui Ecosanctuary over about 10 years — bird counting, planting and weeding — have afforded me opportunities for some interesting finds.

Autumn, particularly after rain and when the ground is still warm, is the best time for a fungus search.

However, bracket or shelf fungi are always apparent, their sporing structures found growing on the trunks of dead or dying trees.

Typically, their upper surface is woody, spores being produced from pores on their undersides.

Many species of bracket fungi are perennial, fruiting annually from the same structure and so building a layer year after year.

Another fungus often spotted throughout the year is the stinkhorn (Aseroe rubra).

It resembles a fleshy red flower having  five to nine "petals" that are forked at the ends.

Look closer and its centre and the base of the petal are covered when ripe with an olive-green spore-containing gleba, the smell of which attracts flies that then carry the seeds away from the parent plant.

It ranges in size from 2cm to 10cm and tends to occur in patches.

It is typically found in areas of disturbed or bare soil and at Orokonui it can be seen along the sides of tracks where a little sunlight penetrates the canopy.

The pigment in this organism is similar to the carotenoids found in leafy plants and requires a little sunlight for its production.

Pouch fungi are also easily seen, their bright colours (often red) standing out like beacons from the undergrowth.

The pouch, about the size of a small walnut, is held on a stalk but does not open to release its spores.

It is thought that fungus eaters such as slugs and insects aid their dispersal, or insect-eating birds such as kiwi.

Coral fungi (Clavaria, Clavulina, Ramaria and other species) are quite prevalent in the forest.

The species vary in colour.

They can be pink, white, grey, purple, cream, bright yellow or orange.

Their common names are quite descriptive: club, spindle, and icicle.

While the brightly coloured species are very easily spotted, others make themselves obvious by occurring in large groups.

Less conspicuous than these species are the earthstars and puffballs.

Often occurring in small clusters and noticed on the relatively bare surfaces of the track, these small round bodies are usually discovered when kicked or disturbed, causing them to liberate a smoky stream of spores.

Here I’ve described just a few of the more obvious fungi that one may encounter on a forest walk, but there are tonnes of others.

The forest is full of fungi, most of which are unseen until their fruiting bodies emerge from the mass of mycelium, the main body of the fungus hidden in the soil, where it fulfils its function in the ecosystem: it is inexorably converting dead and dying wood and leaf material into nutrients that are then available to feed the next generation of plants and trees.

In fact, a forest can’t exist without fungi.

- Maree Johnstone is a long-time volunteer at Orokonui, who leads a team looking after the plantings around the visitor centre.