Gold still in them there rivers 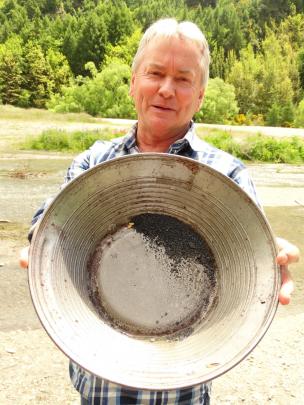 Justin Eden, of Arrowtown, shows how nuggets of gold can be spotted while panning. Photos: Louise Scott 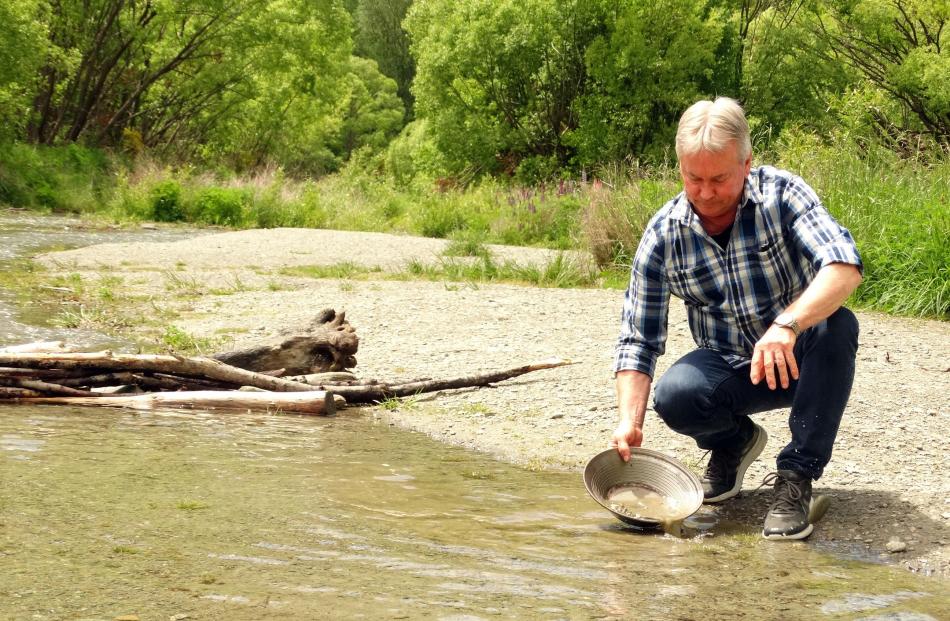 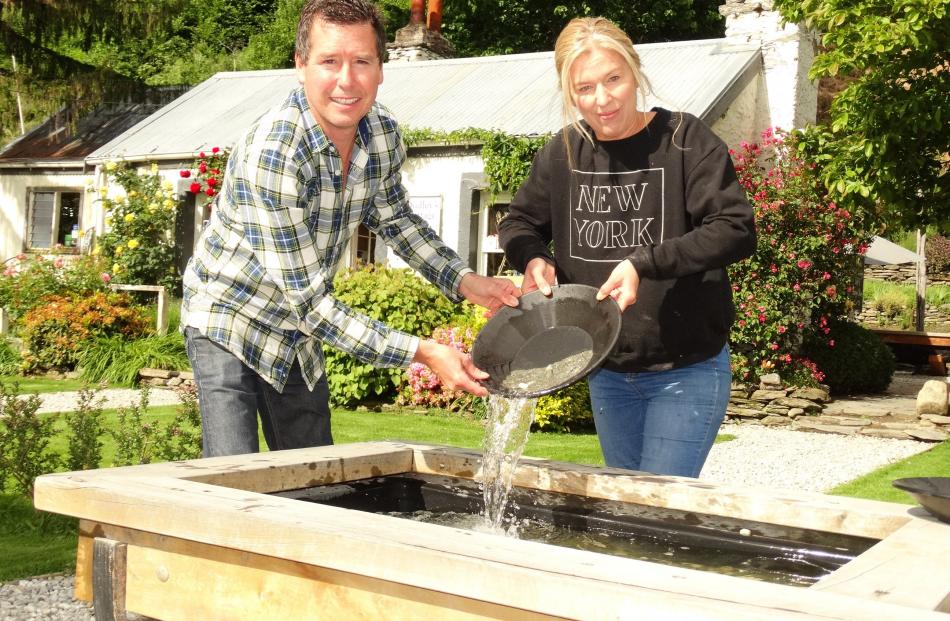 Arrowtown ward councillor Scott Stevens (left), who owns the historic Dudley’s Cottage on Buckingham St, has turned it into a tourist attraction. Pictured with Allie Blair, also of Arrowtown. 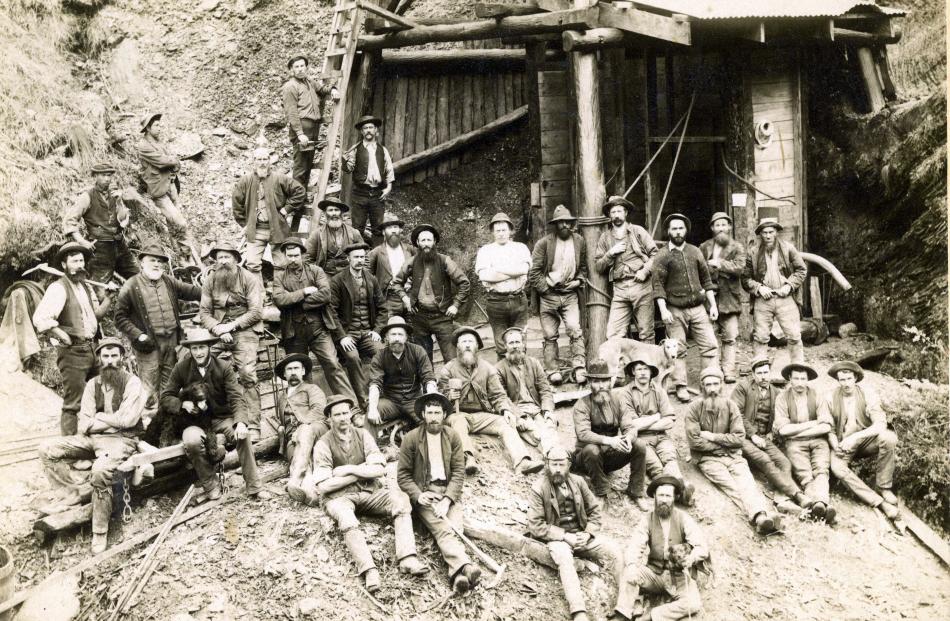 Miners at Phoenix Mine, Skippers, in 1892. Photo from Lakes District Museum.

When gold was discovered in the Arrow River in the 1860s thousands of miners flocked to the Wakatipu basin in search of their fortune.

While mining may have given way to tourism, the methods and techniques established during the goldrush  are still used today. Louise Scott talks to prospectors panning for their prize in Arrowtown.

A shovel and pan might be all you need to make your fortune. Well, maybe throw in a bit of patience, too.

Arrowtown and Queenstown's goldrush background might be well documented, but a lesser known fact is that local rivers still teem with the precious metal, says shopkeeper and gold enthusiast Justin Eden.

''I get 100 or more people in here each day thinking it's all gone. They are wrong. There is more gold to be found out there if you want to look for it and have the time to do so.''

One of many who still prospects on the Arrow and Shotover rivers, Eden owns The Gold Shop on Arrowtown's Buckingham St, home to the largest collection of locally found gold nuggets.

He has a regular supply of local miners coming in to trade their treasure.

''It varies. One day it could be gold worth $35, maybe another up to $50, or maybe only a bit worth $15. They bring it in to see how much it is worth. Some of the bigger nuggets may be found by a metal detector rather than traditional panning, of course.''

He uses the gold to make the shop's own range of gold-flake jewellery.

In the height of summer he gets up to 20 people per week through the door.

Hauls fluctuate. It could be a few grains in a jar, or regulars who drop off a few ounces each week. The biggest yield recently was 11 grams, worth about $650.

''You have to be patient. But every time you go out, it isn't a case of 'what if I find something', it is 'how much will I find.' It is purely recreational . . . You do it because you like it; otherwise you would be working for about $3 an hour at times,'' he said with a chuckle.

Eden says it is one of the most popular local pastimes.

He does have to break the news to some gold enthusiasts, particularly kids, that they haven't found their fortune; that their discovery is just a bit of shiny rock.

Luckily, panning is cheap as chips: for $3 you can hire equipment from Lakes District Museum.

Still, it can be addictive.

''It is a thrill. There is always that chance you will find something big. It is not an impossibility. There is more gold out there to be found, you just need to get your gear out and go - and maybe some luck, too.''

While the Arrow River, near the town centre, is one of his favourite places to pan,

his biggest haul - 12 ounces - was in Australia, he admits, adding such ''finds'' are unusual but not unheard of.

Many miners are media-shy and don't want to comment on their success.

One local, who says he got about $6000 of gold after three days of ''hard graft'' last summer, wasn't keen to talk to the Otago Daily Times on the record, because of concerns someone might pinch his prized spot. All he would disclose was that his find was in ''the Shotover''.

Another said his claim was quite tricky and dangerous to get to, a half-day walk into Skippers Canyon, near Arthurs Point on the outskirts of Queenstown.

The neighbouring Skippers township was once the largest gold settlement on the Shotover River. It, as well as Queenstown, Arrowtown and Macetown were all established around the rush.

Lakes District Museum director David Clarke says the region was inundated with people trying to make a quick buck when gold was discovered on the banks of the Arrow River in 1862 by Jack Tewa, who worked as a shepherd for Queenstown's founder, William Rees.

Not all who descended on Arrowtown were career miners. Many were working-class folk who simply upped sticks in a bid to make their fortune. Some were Kiwi, joined by those from every point of the compass.

Whitechapel, near Arrow Junction, was known as Little Denmark. There was a strong Irish contingent, a thuggish bunch known as the ''Tipperary Men'', noted as claim jumpers, and professional miners who had previously worked in the United States and Australia.

However, Fox established himself as top dog, Clarke explains, adding he had a tough reputation and punch-ups weren't uncommon.

''The constabulary were very quickly dispatched. They [the Provincial Government] recognised from experience there could be trouble - a bunch of guys together, fighting over gold.''

The arrival of miners was challenging for the farmers already in the area.

There wasn't enough food or supplies to support extra mouths.

In the early days the population mainly comprised single men, who lived in makeshift tents; there was no real infrastructure.

Clarke says these were ''party days'', when grog-shanties popped up all over Queenstown and Arrowtown from the Arrow River right up to Shotover.

''There are bowling alleys, dog fights, games of skittles, rat baiting, guys out the front of every establishment touting for business. All you had to have was a supply of booze and a tent.''

Hotels and pubs struggled to get barmaids, as the single men in the fledgling towns took them as wives. To help rectify the situation, businesses started to advertise for ''ugly'' waitresses, hoping this would curtail any romance.

As more gold was harvested, and miners enjoyed the early boom years, people started to make more permanent settlements. Towns started taking shape, families arrived, as did more stable infrastructure, including a water supply, some civic buildings and churches in both Arrowtown and Queenstown.

Mr Clarke describes it as a settling down period.

Communities were being built, but gold was getting harder to find.

This period also led to Chinese immigrants being invited to the country by the Government, to stimulate the economy and mine existing areas.

Tony Sey Hoy's great grandfather, Choie, was one of those who took up a claim on the Shotover River.

While he admits it is in his blood, the Arrowtown man stumbled into it as a career in the 1990s when, while walking along the Arrow River, he noticed a man using a suction dredge.

A sheep musterer at the time, he was attracted to the idea of mining and working for himself.

This was in the early days when licences weren't needed for procuring any natural resources like eeling, whitebaiting, crayfishing - or gold mining.

He mined in his 20s and 30s, but began to reconsider his career path as ''hard graft'' started to take a toll on him.

Now, gold is a recreational pastime for Sey Hoy. He still has a couple of gold claims, one on the Arrow River and one near Glenorchy.

It is addictive, he says.

''It is the freedom of going out there, camping out there. It isn't so much the gold; it is spending time with like-minded people, being out there in that environment. The gold is the end result but it is the journey along the way, really.

''I just think it is amazing that things have been buried for millions of years and nobody has ever set eyes on it. You can pull it out of dirt and it doesn't tarnish. It is gold. It is incredible.''