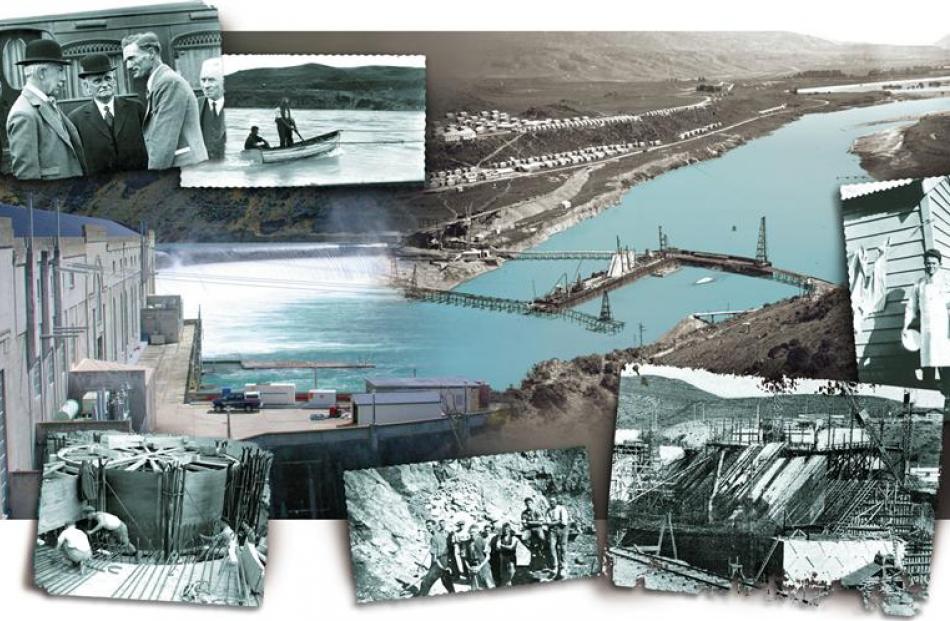 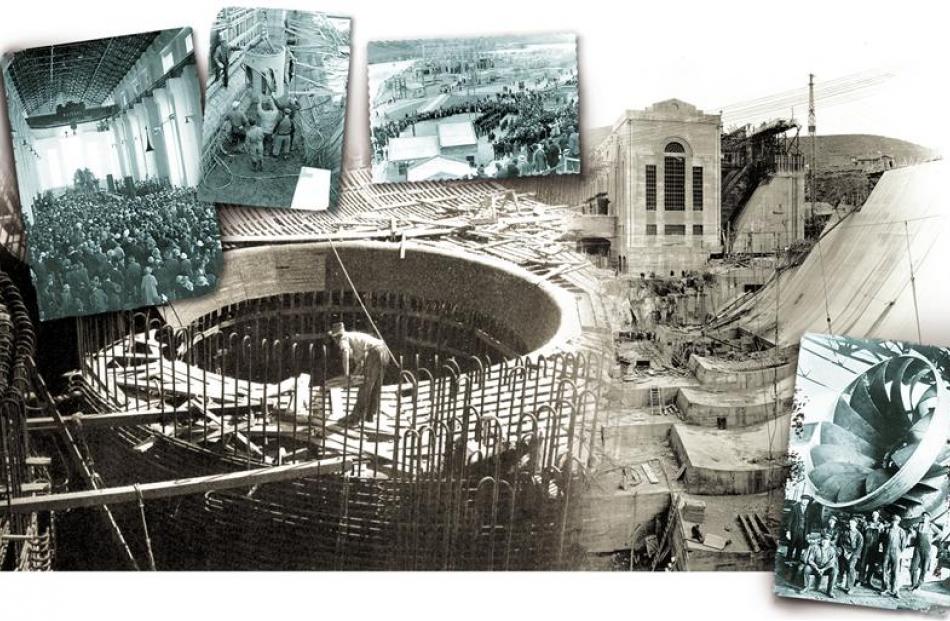 Main photo left: One of the turbine moulds is reconstructed in situ in the dam. Main photo right: The powerhouse (at top) nears completion. Smaller photos clockwise from top left: In the powerhouse at the opening of the Waitaki dam on October 27, 1934.... 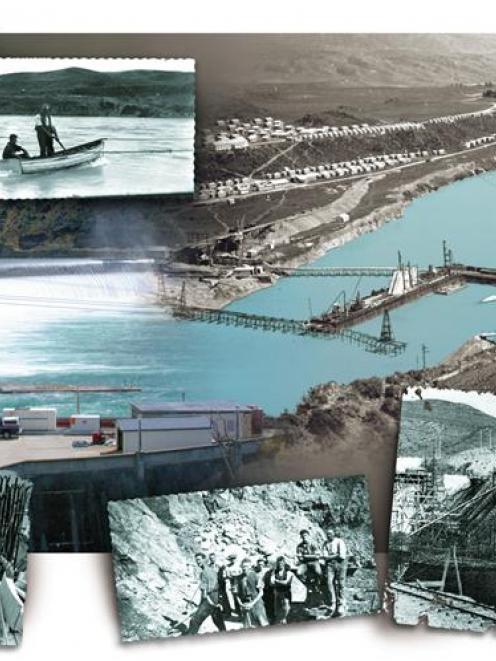 Using picks and shovels, a construction force of between 1000 and 1200 workers started building the Waitaki dam and its powerhouse in 1928 - never envisaging it would be the first of eight that would tame the mighty Waitaki River for electricity.

During the Depression, the project provided much-needed work for those without jobs, although they had to labour through extremes in a climate ranging from hot summers to freezing-cold winters.

The Waitaki River had been identified as the best South Island river for hydro development and field investigations began in 1925.

Various sites were looked at for the Waitaki dam, one near Awakino being selected because of good rock foundations at each abutment and across the valley.

Room was available for a dam and its associated powerhouse and a railway line as far as Kurow was also an advantage.

The design and construction was handed over to the Government's Public Works Department hydro-electric branch.

Before construction began, one of the first tasks was to erect a temporary camp to house up to 1000 workers and their families.

On past public works jobs, accommodation had been in tents, but because of the climatic extremes and long-term nature of the project, it was decided to provide more substantial wooden houses and huts.

Senior staff were allocated houses built of concrete blocks, which would remain for permanent staff.

Some of these survive today in the Lake Waitaki Village, now privately owned. 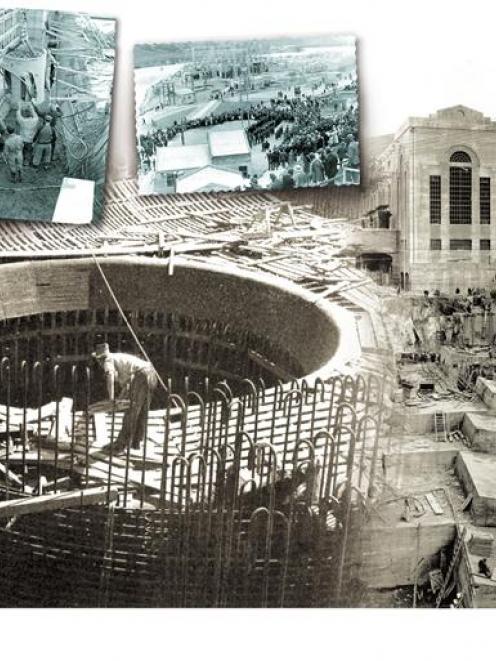 Main photo left: One of the turbine moulds is reconstructed in situ in the dam. Main photo right: The powerhouse (at top) nears completion. Smaller photos clockwise from top left: In the powerhouse at the opening of the Waitaki dam on October 27, 1934. Workers pour concrete during construction of the Waitaki dam and powerhouse. The opening of the Waitaki dam. A crane lifts one of the Francis turbines into position in 1932. Photos by Courtesy Meridian Energy, Otago Witness, ODT Files.
The Kurow railway line was extended to the site, ending a little downstream of the dam.

Several roads had to be realigned and fenced.

The department had a core permanent works staff, but still needed a lot of extra people to build the dam.

With the Depression starting to bite, they came from backgrounds not used to the physical work - unemployed barbers, musicians, artists, tailors and factory workers.

Many struggled to cope with the physical demands.

Work started in 1928 when a trestle bridge was put across the river at the dam site.

Instead of the more modern practice of diverting the river through a tunnel, the dam was built in sections, of about 15m, with those sections under construction protected by a coffer dam while foundations were anchored to solid rock.

The first coffer dam - which enclosed the area under construction to provide a dry work environment - enclosed a short length in the centre of the river, where workers set to with shovels digging out the foundation.

The river was large, swift and, especially in winter, very cold.

The wind down the valley could be very strong and several men drowned when blown into the river.

The last dam block was completed in mid-June, 1934, and the sluice gates lowered to fill the new lake by September 28.

Work on the powerhouse and installation of the electrical equipment and generators had proceeded in conjunction with construction of the main part of the dam.

Installation of the two generators was completed by the end of 1933, leaving completion of wiring, testing and commissioning to 1934.

Unfortunately, the electrical work had not been completed and, when Governor-General Lord Bledisloe presided over the official opening, the symbolic lights were lit with electricity from Coleridge.

By the beginning of 1935, the power station was operating.

By 1938, it was clear more production was needed and two additional turbines were installed, one in 1939 and the second in 1940.

In 1943, electricity demand prompted the installation of a fifth turbine, to bring the station up to its designed 75mW.

Later, the powerhouse was extended and two more turbines installed in 1954 to take advantage of an improved flow of water when the Pukaki and Tekapo projects were completed.

The Waitaki dam was the first built on the Waitaki River, using the potential of the storage lakes of Pukaki, Tekapo and Ohau, now all owned and operated by Meridian Energy Ltd.

Tekapo A was the next, commissioned in 1951.

But hydro development of the river may not have ended, and Waitaki dam could have a major role to play in the future.

Regular inspections of the 75-year-old dam show that, while turbines may need replacement, the structure is sound and will continue to operate for the foreseeable future.

Meridian has proposed its north bank tunnel concept power scheme between Lake Waitaki and the Stonewall.

It will be a radical departure from what has gone before.

Instead of dams, lakes and canals, it will take water from just above the Waitaki dam into a 34km-long, 10m or 12m-wide tunnel with a single powerhouse.

Meridian still has to decide whether or not to build it.

If the scheme goes ahead, the earliest a decision would be made is 2012, and earliest commissioning would be 2020.

Meridian would operate the tunnel scheme as an integral part of the whole Waitaki power scheme, using water which had already flowed through its other power stations.

Lake Waitaki would be a storage head pond for the new scheme, providing up to 260cumecs for the tunnel.

At present, Waitaki generates up to 500GWh of electricity a year, but with the water going into the tunnel this would reduce to about 225GWh a year.

Taking into account the reduced generation through the Waitaki powerhouse, the tunnel scheme would add between 1100 and 1400GWh of electricity to the New Zealand supply - enough for all the houses in Christchurch.

The new tunnel scheme would generate between four and five times as much electricity from the 260cumecs that it now does by passing it through the Waitaki power station. 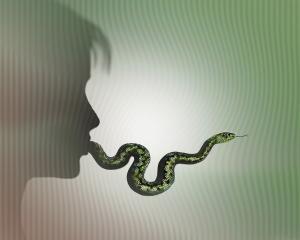 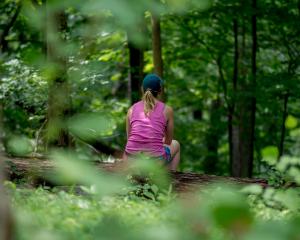 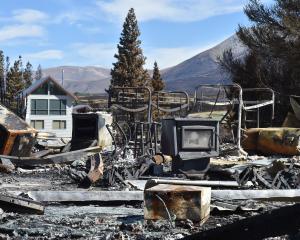