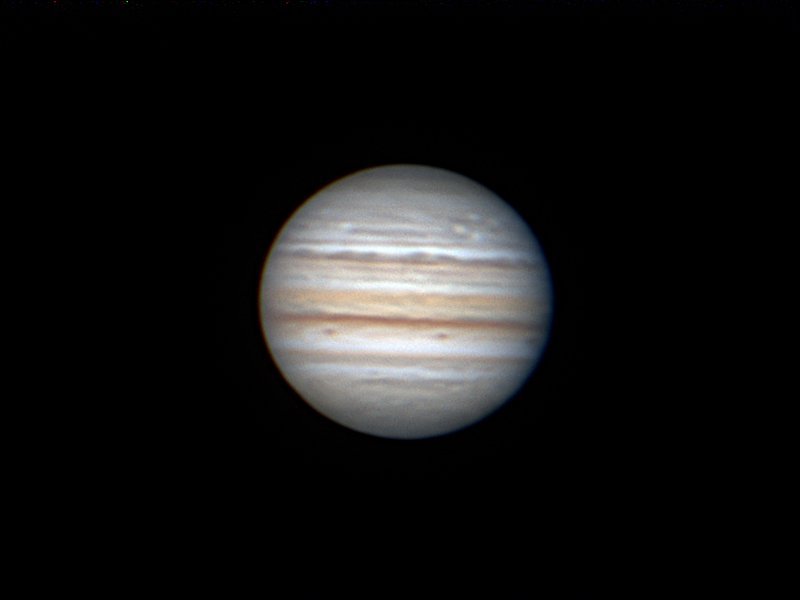 Jupiter, taken from Ian Griffin’s observatory recently. PHOTO: IAN GRIFFIN
When the sun sets tonight, turn your back to it. As the sky darkens you will be greeted by the marvellous sight of Saturn, the waxing gibbous moon and Jupiter rising in the eastern sky. All three objects are moving through the constellation of Capricorn, the sea-goat.

Of the three, Saturn will be highest in the sky at sunset.

Look for the beautiful ringed world just above and to the left of the moon.

This evening the moon will be just over 98% illuminated.

With full moon occurring on Monday, light from our closest celestial neighbour will dominate the heavens for the next few nights.

After sunset, Jupiter will be visible very low in the sky, below and to the right of the moon.

Jupiter will appear as an incredibly bright yellow-white “star”.

Jupiter was at opposition yesterday. Opposition is a term used by astronomers to describe the moment when a planet is opposite the sun in the sky.

This means that the fifth planet from the sun is at its closest point to earth and, as a result, appears to be really bright. If like me, you are a fan of Jupiter, the next few weeks are the best time this year to study our solar system’s largest planet which reaches its highest point in the sky after midnight.

This week Jupiter is about six hundred million kilometres from Earth. Travelling at a speed of three hundred thousand kilometres per second, the light you see when looking at this gas giant planet began its celestial journey to your eyes just over thirty-three minutes ago.

If you have access to a telescope, it is well worth pointing it towards Jupiter. Despite its enormous distance from us, there’s a lot to see on this fascinating world. Tonight for example all four major moons will be easily visible as bright points of light beside the planet. Just after 7pm Jupiter’s great red spot will cross the centre of the planet’s disk. This giant storm has been raging in Jupiter's atmosphere for several hundred years and is definitely worth looking at.