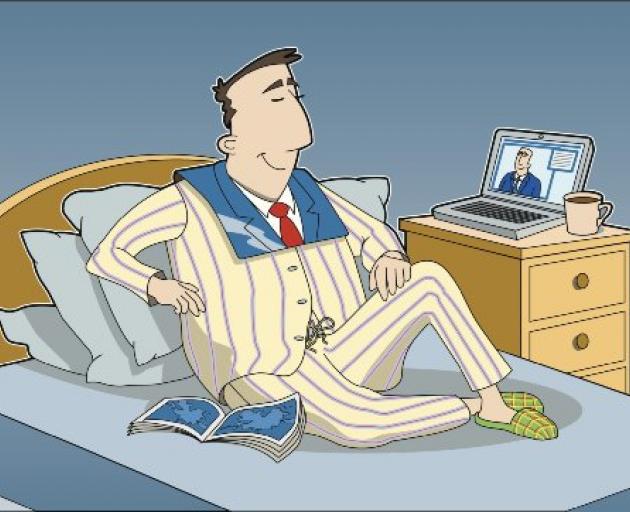 Photo: Getty Images
The first rule when it comes to video conference calling is, don’t dress for the beach. Or the gym. Or bed.

‘‘One time I had a woman on the call in a spaghetti strap tank top,’’ says technology executive Amy Bailey. She manages a team of 10 remote workers from her home in California.

All video calling software has the same basic features: a mute button, a screen-sharing option to let other callers see what’s on your computer, and a chat function to type messages to other users.

‘‘Mute your microphone if you aren’t talking,’’ advises Bailey. If you’re unfamiliar with video calling, try practice calls to family and friends.

You know the guy. He drones on in meetings while everyone else shifts in their seats. Sometimes he steals his female co-workers’ ideas.

The way to stop a mansplainer hijacking the call is for managers to be firm about who speaks, and for how long.

‘‘At the beginning, say: ‘This is the purpose of the meeting, this is how long we’ve got, we’re going to spend this much time on each item’.’’

Zoom gives you the option to digitally touch up your appearance, using technology not dissimilar to an Instagram filter. However, the touch-up option only blurs and brightens your complexion: good if you’ve got a hangover, but not exactly a digitally rendered suit.

Be mindful of what your colleagues can see behind you. An overflowing laundry basket doesn’t give the best impression.

Petriglieri often teaches through video conferencing, and is aware of how the technology can cause people to disassociate from the content of the meeting.

‘‘You become a zoombie when your spirit is sapped from what you’re doing.’’

The average European office worker spends 13 days a year in meetings, many of them pointless.

Be selective about whom you invite.

‘‘Get as few people on the call as possible,’’ says Bruce Daisley, author of The Joy of Work.

‘‘When you’ve got a collection of 50 postage-stamp-sized faces on the screen, it’s impossible to feel connected. And when you don’t know everyone in the meeting, you speak less frankly.’’

You wouldn’t openly browse Twitter during a meeting, so don’t do it in a video call.

‘‘If you’re typing, mute your keyboard so other people don’t hear clicking.’’

If some people are dialling in from home, and others are at work, be mindful of the people physically absent. Meetings may be weighted in favour of the people in the room: they can exchange looks or read body language in a way those plugged in from home can’t.

Petriglieri often teaches mixed seminars, where some participants are dialling in, and others are working from home. He uses the example of meetings between heads of states: there are the world leaders who sit at the conference table, and the aides on the chairs behind them.

‘‘The best advice I can give is to be mindful of the people in the second row,’’ says Petriglieri. ‘‘You need to develop a muscle for inclusion.’’

If you are in a meeting room with a large screen showing people dialled in from home, Petriglieri recommends asking participants at home to raise their hands if they want to talk.

‘‘It’s easy to ignore people who aren’t in the room if the conversation is getting going,’’ he says.

‘‘Ask people to let you know if someone is raising their hand and you don’t see it.’’

If you’re sharing a slide-deck or other notes during a video call, other people in the meeting will be able to screenshot those materials without you realising. Which is fine if you trust your colleagues, but good to be aware of nonetheless.

‘‘The interesting thing about remote working is that people always think it will be better,’’ says Daisley.

‘‘But people’s stress levels are actually higher when they work remotely. It’s stressful and lonely. We think our boss doesn’t trust us and our team doesn’t like us.’’

Like any technology, video calling is neutral. It’s about how you use it.

And remember: if you are watching Netflix instead of working, always put your microphone on mute. —