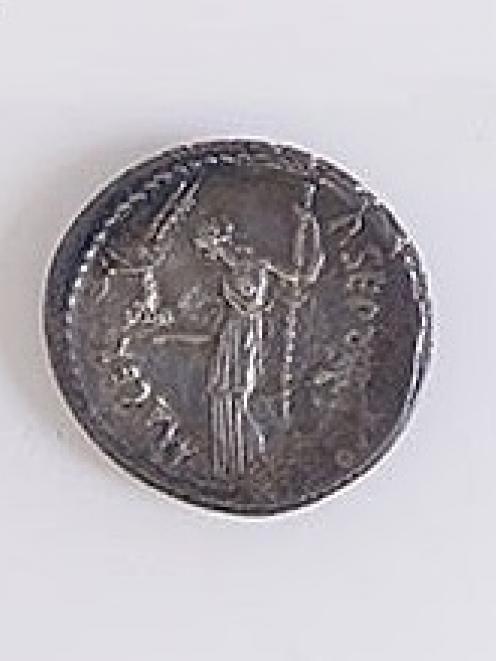 Both sides (above and below) of a Julius Caesar denarius, minted in January-February BC44. At this time it was unique for a living politician's portrait to be included on a coin minted in Rome, although it had been done in the Greek world. This side of the coin features Caesar's ancestral goddess, Venus, holding winged Victory. 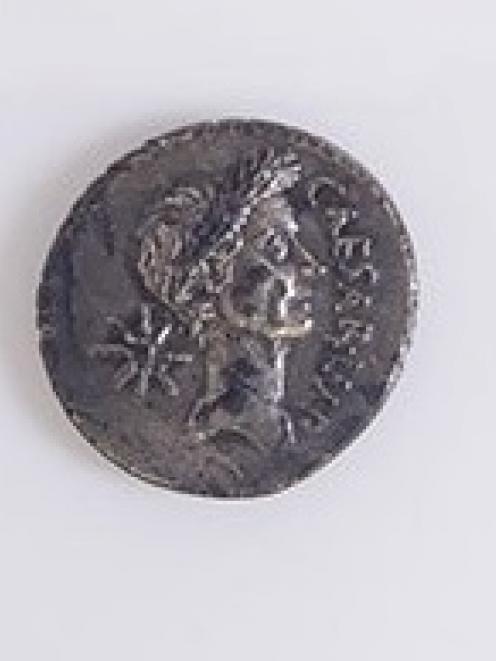 Caesar was murdered on March 15, BC44 - including his portrait on the coin might have sent a signal to fellow Romans that he considered himself the equivalent of a king, and might have been an added reason to assassinate him. PHOTOS: OTAGO MUSEUM COLLECTION

Money has historically been understood to mean coins and banknotes used as a medium of exchange for goods and services, Robert Hannah writes.

In our present world this definition still applies, although electronic "funds" have threatened to take over the old medium - a threat countered whenever credit funds appear too unstable to be trusted and societies revert to tangible objects, as in times of a recession.

Clay tablets from the ancient Near East tell us that metal bullion was used as money as early as the third millennium BC, and such a means of exchange continued in use for centuries. The metal was valued against an accepted standard: in the Near East it was a weight of silver, while in Egypt it was copper. These metals had a value of their own in these societies because of their relative scarcity. We do the same nowadays in the way we value gold on the currency markets.

In ancient Greece, the monetary standard was originally not a weight of a given metal but a number of standard bronze or iron utensils, such as cauldrons, axes or roasting spits, all useful, but expensive. These were objects used in daily life, but also of such importance as to be dedicated in temples and sanctuaries to the gods as symbols of wealth.

Coins, as we know them, are an invention of the cultures of western Turkey in the seventh century BC. They take the form of very small, roughly oval-shaped discs of electrum, a natural, yellowish alloy of mainly gold and silver that occurred in the silt of the local rivers of the Kingdom of Lydia. The varying nature of the alloy made it difficult to value, so standard weights were introduced, and these formed the first coins in various sizes, or denominations. This very localised solution to a problem in valuation became popular in neighbouring Greek territories, as it simplified the business of trade, and from there it spread across the Mediterranean.

Almost from the beginning, coins were decorated on their obverse (the "heads" side) with designs, some abstract or geometric, other naturalistic in the form of all manner of animals and insects - about 100 types are now known. The reverse (or "tails") side was usually just left with the mark of the punch tool that was used as a hammer, with the metal flan placed between it and the anvil, which bore the design die. The punch mark served to demonstrate the purity of the metal through the coin (i.e. it wasn't just electrum-plated over a baser metal); the obverse types symbolised the various issuing authorities who guaranteed the value of the coin.

Among the earliest Greek coins in the Otago Museum's collection is a silver one from Athens, dated to the early fifth century BC. On the obverse side is the helmeted head of the goddess Athena, patron of the city, while on the reverse is her companion, the owl, with a sprig of olive set behind it, and three Greek letters, an abbreviation for the word ATHENAION, meaning "of the Athenians". The denomination was called an "owl", from the image on the reverse. Silver had become the common standard for Greek coins because of its greater abundance in comparison with gold, and the capacity for such coins to pay for a variety of goods and services when manufactured in larger or smaller denominations. Silver was also locally mined at the site of Laurion, to the southeast of Athens.

Over time Athens set up colonies in the Mediterranean, and one was the city of Thourion in South Italy, settled in BC444. A silver coin from there, and in the museum's collection, illustrates the colonial dependency of Thourion through the image of Athena's helmeted head on the obverse. Its reverse is a bull, with its right front leg animatedly raised, and above it can be read the Greek letters forming the word "Thourion", i.e., "of the Thourians". Thourion was one of the first cities in Italy to produce bronze coinage, perhaps because silver was less abundant in Italy, whereas bronze could be more easily and cheaply produced (it's a mixture of copper and tin, and later zinc), and it replaces some of the silver denominations for smaller business dealings. Greece itself then developed bronze coinage from late in the fourth century.

The greatest city in Italy was Rome. Here uncoined, "raw" metal was originally used for payments, such as for fines or soldiers' pay. The metal of choice in central Italy was bronze, though silver was also used. Among the types of coinage first developed in the Roman Republic in the third century BC were the so-called "aes grave" (heavy bronze), comprising heavy cast bronze discs. An example of one is on display in the museum's collection. The basic unit was the as (a Latin word which may derive from aes, meaning bronze), which was then subdivided into a half (semi), a third (triens), a quarter (quadrans), a sixth (sextans) and a 12th (uncia - from which we get the word "ounce"). A variety of designs was used on this coinage.

This early coinage was superseded by the standard silver denarius in BC212-11 during the second war with Carthage. The new currency was originally minted from almost pure silver (97%-99%), and replaced the previous coined silver, which had devalued badly in the first years of the second war with Carthage. The denarius remained the standard silver denomination until the middle of the third century AD, when its intrinsic value in turn had collapsed to only 40% silver and it was replaced by the "radiate", supposedly a double denarius but with a silver content much less than that would imply. By 268AD the silver content was an abysmal 2.5%. The name derives from the image of the emperor on the obverse, where he is wearing a radiate crown originally associated with the sun god.

Robert Hannah is the honorary curator, classics, at Otago Museum.