Writer uncovers how Robbie got to the Octagon 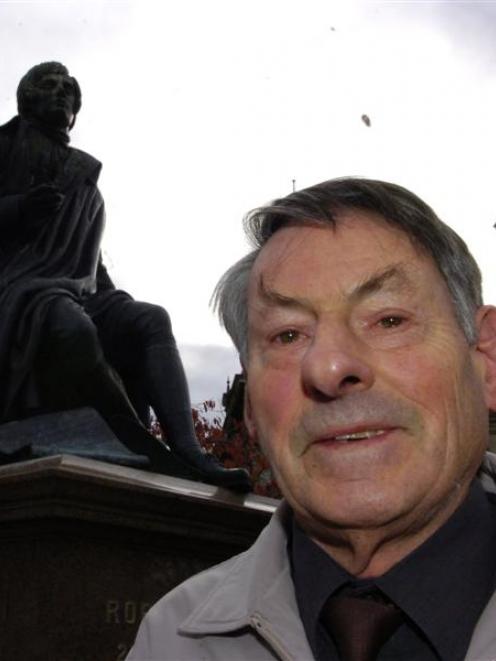 Donald Gordon and Dunedin's Robbie Burns statue. Photo by Jane Dawber.
It's a bit embarrassing that Dunedin's best-known monument is a statue of a man who never set foot in the place.

That's according to Donald Gordon, author of Robbie, the story of Dunedin's Burns statue.

Gordon would like to think we have some "homegrown hero" worthy of a statue.

But he is happy for his book to shed light on the subject of our most famous one, and to look at the controversy that surrounded it.

The Rev Thomas Burns is remembered as the founding father of the Otago settlement but Robert Burns, his uncle, is less well known, he says, recalling a radio interview he heard with a New Zealander who worked at the Burns Museum in Scotland.

Until she landed the job, the woman thought Robert Burns was a New Zealander who had founded the chain of Robbie Burns liquor stores.

Gordon was surprised to find it was James Gordon Stuart Grant, one of Dunedin's most colourful and "conceited" characters, who had proposed the city have a statue of the Scottish poet.

(He also predicted there would be a statue of himself in Dunedin by 1984, saying the city would never again see a man of his calibre).

Grant had come to Dunedin thinking he would be the first rector of the high school but was engaged to run a school called the Dunedin Academy.

As a sideline, he took to giving public lectures and sermons.

A sceptic who didn't believe in the miracles and resurrection of Jesus, he was quickly branded a heretic and forced to close his school.

Later, he produced abusive pamphlets and climbed "on soap-boxes ranting away and standing for political office all the time and hardly ever getting any votes", Gordon says.

"Everyone hated him and he didn't have a good word to say about anyone much, except for Burns."

In a letter which appeared in Dunedin's Saturday Advertiser on November 29, 1879, Grant wrote that Burns' "genius" had cast its spell, not only over his own land, but every country where a Scotsman was to be found.

Statues of him had been unveiled in Kilmarnock, New York, Dumfries, Edinburgh, Ayr and Glasgow and he asked why there should not be one in Dunedin: "It would raise our souls from the sod, and waken the slumbering fires of genius in some unborn bosom yet".

In 1881, the Aryshire Association of Dunedin convened a public meeting to discuss the proposal and soon concerts and subscriptions were being organised to raise the necessary funds.

Behind it all were some of the city's most influential men, including the first minister of Knox Church, Dr D.M. Stuart, charismatic Presbyterian minister, the Rev Rutherford Waddell, Dunedin's youngest mayor, Keith Ramsay, wealthy businessman Robert Wilson and a member of the House of Representatives, William Downie Stewart.

An intemperate man who is said to have fathered at least a dozen children by several different mothers, Burns was nevertheless a hero to his countrymen.

Part of that was to do with the period in which he was living, Gordon says.

" It was not long after [the 1746 battle of] Culloden where the Scots had been humiliated.

"They had been forbidden to bear arms, wear tartan or play bagpipes."

The Scots were led to believe that their culture, customs and dialect were inferior to those of the English.

"Then Burns came along and he raised morale."

Burns not only glorified Scottish history in his poetry, he showed that beautiful poetry could be written in a Scottish dialect and expressed the idea that a man's character, not his wealth or social class, should be the measure of his worth.

"A lot of people thought he was a messenger from heaven because his background was quite humble and they expected poetry to be written by educated people.

"They thought he had divine inspiration, although there was plenty of evidence he was no angel."

Because Burns died in 1796 (before photography had been invented), the sculptor commissioned by the Dunedin committee had to rely on paintings to achieve a good likeness.

However, he also took measurements from a plaster cast of the poet's skull made by phrenologists, people who believed a person's personality and talents could be deduced from the shape of the cranium.

His other notable works included the Scottish memorial to Prince Albert and the bronze equestrian statue of the Duke of Wellington, which both stand in Edinburgh.

Much of the Dunedin statue is based on symbolism, Gordon says.

The forked stump of an elm tree is a traditional symbol of Scotland, while the plough-sock represents Burns' farming background, the quill and scroll his poetry.

The poet is is shown in the act of composing Thou ling'ring Star (aka To Mary in Heaven), the poem he is thought to have written about his girlfriend, Mary Campbell.

The couple had exchanged bibles as a token of betrothal but Campbell later died of "fever".

The poem suggested she had gone to heaven and become a star.

The pedestal is of polished red granite, quarried from Scotland's easternmost point and shipped to Dunedin in several parts.

Steell's earlier statues of Burns had been widely praised but some had criticised the position of the head, tilted back as if gazing at a star - Scottish-born philanthropist Andrew Carnegie even describing the figure as "looking like a humpbacked simpleton".

This time he changed the angle of the head and legs, which most regarded as an improvement.

Back in Dunedin, there were arguments about whether the statue should be placed at the Arthur St reserve, the Botanic Garden or The Triangle (the area now known as Queen's Gardens).

A vote among subscribers eventually favoured the Octagon, but not before the Otago Daily Times satirical columnist, Civis, had had a field day.

At the 1884 Burns Dinner, the chairman of the statue committee, John Bryce Thomson, had said there were four corners in the Octagon, one of which would soon be occupied by the Burns statue.

Thomson suggested a second illustrious Scotsman might stand in one of the other corners, with an Englishman and an Irishman in the two others.

Civis argued an octagon had eight corners and suggested Thomson had been referring to the four corners at the intersection in the centre - at that time, a footpath ran through the middle of the Octagon, linking upper and lower Stuart Sts.

If there were a statue in each corner, there would be a "total monumental population of 12": "Twelve memorial effigies of illustrious men! What lovers of fine art, what monumental mason in search of a job, does not feel his soul kindle?".

Soon afterwards, the committee fell out with Steell, after reading in a Scottish weekly that he was casting a Burns statue for London and only after that was completed, would he produce a duplicate for Dunedin.

It was the first members had heard of the London statue and they were convinced the English city had jumped the queue.

Controversy continued into 1887 when the foundation stone was laid and clergymen upset members of the Burns family by mentioning the "blots and blurs" of the poet's life.

Then the banquet held after the unveiling of the statue on May 24, 1887, turned into a night of drunken revelry.

A great-nephew of the poet angrily denounced the clergy "who were scarcely able to compose a sermon in their own pulpits, [yet] thought fit to apologise for Burns".

There were also outbursts, walkouts and bawdy speeches - an occasion that Civis said Burns himself would have enjoyed.

Donald Gordon, who describes the poet as brilliant but wayward, says that apart from religious figures such as Jesus, Mary and Buddha, totalitarian leaders like Lenin and popular monarchs such as Queen Victoria, no-one has been commemorated with more statues than Robert Burns.

And of the 50 worldwide, few are better known or attract more attention than Dunedin's.

"In a lot of places they're tucked away in parks and not many people know about them," he explains.

"Dunedin is one of the few places where it's the heart of the city and a focal point."

Robbie, the story of Dunedin's Burns Statue, is out now, selling for $25.

It was no coincidence that the launch of Donald Gordon's book, Robbie, the story of Dunedin's Burns Statue, was held at Speight's Brewery.

Gordon (71) is a retired chemist who has worked at the brewery for nearly 50 years.

A science graduate from the University of Otago, he joined the laboratory staff in 1960.

Today, he looks after the archives and compiles a weekly staff newsletter.

The book launch was held in the Donald Gordon bar at the brewery - "If you stay here long enough, you get something named after you," he says from his office above street level.

Gordon has recently been asked to update his 1993 book, Speight's: the story of Dunedin's historic brewery.

He also contributes articles to the Otago Settlers News.

It was in 2002 while researching an article for the Otago Settlers Association publication that he came across a reference to the Burns statue committee and the fact its chairman was J.B. Thomson, great-grandfather of his friend, the late Jane Thomson.

"She didn't know anything about this [involvement] and when I told her, got very excited.

"So I had a look through a few more newspapers and came across lots of very interesting reports of the statue committee and some hilarious observations of some of the people who were not really passionate supporters of it, especially [the ODT's satirical columnist] Civis."

"We started off as a Speight's team, but these days we've got a few outside geniuses who help us."

Twice a year, friends, neighbours and colleagues gather for mini-golf tournaments at Boar Holes, the private course he developed around his house more than 40 years ago.