Messages in the medium 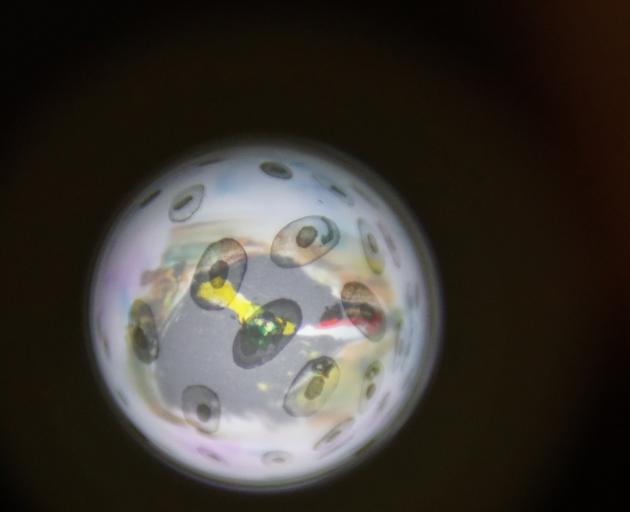 Emily Brain's work How do we control Avian Malaria?, in the exhibition "Art and Water: Mountains to the Sea" at the Otago Museum HD Skinner Annex, references the threat from spreading mosquito populations due to climate change. Photo: Supplied
Art about climate change is not a extra, Dunedin School of Art art-historian Dr Bridie Lonie tells Maureen Howard.

In 2007, Dr Bridie Lonie, Head of School at the Dunedin School of Art, saw a catalogue for the exhibition "Weather Report: Art and Climate Change", curated in Boulder, Colorado, by American art critic and activist Lucy Lippard.

Lonie wasn't in denial about the facts. Her mother was a biology teacher and an environmentalist.

"The exhibition forced me to accept that climate change was coming, and that artists and art historians needed to be involved. It was impossible to escape," Lonie says.

Lonie has trained as an artist, but it is other artists and their work who have drawn her lasting attention.

"I've always been as interested in why people make art as in art itself," she explains.

Her doctorate focused on case studies across time, globally and in New Zealand. The first artwork on climate change that she was able to find was created in New York in 1974. Many have followed overseas and in New Zealand. In Dunedin alone, "off the top of my head, I can think of 30 artists, but there are more," she says. "[Artworks] are the emotional indicators of the response to what is going on." 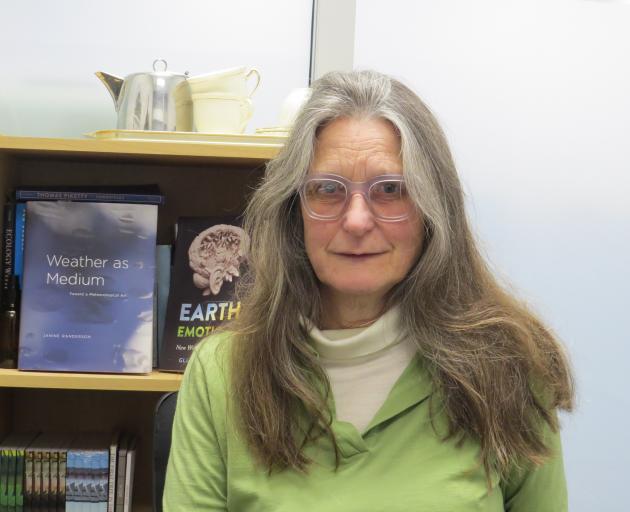 Dr Bridie Lonie. Photo: Maureen Howard
Lonie maintains that the sense-based nature of art helps the viewer to think contextually and to connect the dots between disparate bits of information.

Without straying from the facts, she believes art adds to the communication of climate change science by engaging the emotions as well as the intellect.

"Many artists work closely with scientists to convey data," she says.

In 2007, as part of Lippard's exhibition, Boulder Colorado artist Mary Miss did this quite literally by positioning large blue dots on trees and buildings to show where water levels would rise to in the event of flooding from an extreme rainfall event.

"And the dots were precisely where indicated," says Lonie.

Art can also make the science more accessible to non-scientists. In particular, says Lonie, non-linearity is a common feature of climate change that is difficult to describe.

"So, tipping points and sudden eruptions of unexpectedness can be visualised through different kinds of art media."

Lonie believes that art can also reach out to people who are disengaged or averse to thinking about climate change.

"It can offer a non-confrontational way of negotiating with all the resistances that people have. Because a lot of climate change denial isn't actually denial, it's `I don't want to think about this. Talk about something else'."

And art can spur people to take action. A study investigating the artwork scattered across the city of Paris during the 2015 COP21 United Nations Climate Change Conference showed that art with a hopeful message had the ability to make people feel that they could do something about climate change.

Denial around climate change is passing, reckons Lonie. Yes, there is still some resistance, she says, but "the emotional truth [of climate change] is impacting". Facilitating that awareness and connection, "governments and cities are increasingly calling on artists to create bridges between their understanding of the data of climate change and the emotional responses to it," Lonie says.

Dunedin City Council recognises art as a powerful tool for advocacy, communication and community engagement and "supporting public debate and contribution", according to Ara Toi, its Art and Culture Strategy.

And residents are willing to invest time and money in the arts. According to Ara Toi, the average New Zealander spends $35 per week on "cultural goods and services" and New Zealanders spend more time attending cultural events than residents of many others countries.

Helping to keep events affordable for Dunedinites, the Dunedin Dream Brokerage assists creative endeavours to take place by brokering for unused commercial spaces to be used by artists. Funded by the Dunedin City Council, the initiative is also supported by the Otago Polytechnic and the Chamber of Commerce.

With Dunedin Dream Brokerage, the council supported a climate change related art project called Awa HQ between 2017 and 2018. Awa HQ's focus was the Toitu stream that flows through the city, both above and below the ground. It is a river that is flooding more frequently as climate change intensifies. Artists Angela Lyon, Aroha Novak and Charlotte Parallel spoke to the personhood of the stream in events that included a hikoi, music, water divining, a carnival and a waiata.

Some might not see art as a core council activity, but it isn't an extra, says Lonie.

"Artists help us identify and face what is already here," she explains. "It's not adaptation or [mitigation] - it's both!"

The Dunedin School of Art, with participation from the Schools of Design and Architecture, has identified climate change as a research theme for 2020.

"Climate change is well and truly over as something that is about to happen. It's now. So of course adaptation is necessary."

Exhibitions in Dunedin with climate change themes include:
‘‘Art and Water: Mountains to the Sea’’. HD Skinner Annex, Otago Museum. Until September 21.