Alpine adventuring - on a Kiwi budget 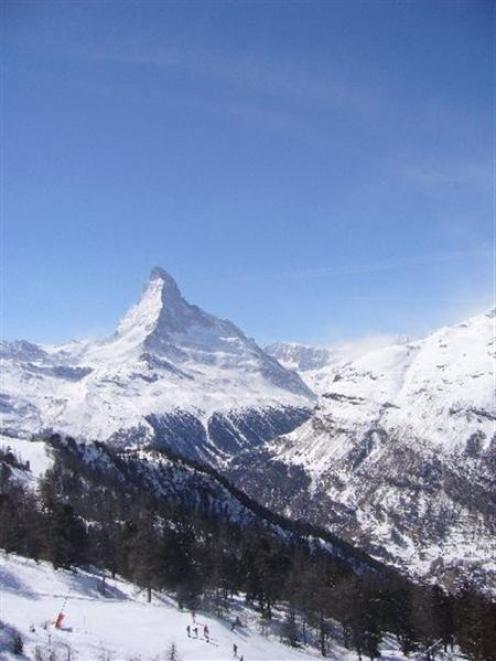 The Matterhorn towers over the Swiss village of Zermatt. Photo supplied.
A little bit of luxury, a little shock to the wallet. Jeff Kavanagh visits the Swiss mountain resort of Zermatt.

To say that Zermatt is expensive is to put it lightly.

From accommodation to dining on the mountain to drinks back down in the village, the strain put on the average wallet can be enough to send its owner into cardiac arrest.

Such expenses aren't necessarily a huge concern for the wealthy Europeans and Americans who normally frequent this luxury Swiss mountain resort, but for those of us without extensive stock portfolios and holiday homes on the Med, a holiday here has the potential to be somewhat financially debilitating.

Fortunately for the budget-conscious Kiwi traveller, it's not all Champagne dreams and caviar wishes, and it's possible to have a great time in one of the most beautiful places in the world without having to put your credit cards into rehab when you get home.

My girlfriend and I have been to Zermatt three times now, and we keep returning, enamoured by its elegance, dramatic natural beauty and superb outdoor activities which include, thanks to its elevation and glacial terrain, 365-days-a-year skiing and snowboarding.

Lying in a valley at the base of the Matterhorn - a stunning giant, jagged canine tooth of a mountain - it's a resort that really does leave you in awe of your environment, and, as it's car-free, there aren't any smelly fumes or growling motor noises to shatter the spell.

Once in Europe, one of the cheapest and most scenic ways to get there is by train from Milan.

Taking this four and a-half-hour trip a few years ago, we happily discovered, as our very full second-class carriage trundled through Milanese suburbia towards the beauty of Lago Maggiore and the Alps beyond, that our $NZ70 one-way tickets entitled us to first class and not cattle as we had originally thought.

Seconds later, we were riding in style and on the cheap. Nice.

Arriving in Zermatt you will naturally need somewhere to stay, and accommodation, in keeping with the village's reputation, can be phenomenally pricey.

At the upper end of the market, a large chalet suite at the luxurious Grand Hotel Zermatterhof will lighten your bank account by about 2210 Swiss francs (NZ$2700) a night in high season (February to April), assuming there is one still available.

Considerably further down the scale, and within most people's financial reach, are a decent variety of one, two and three-star hotels and "hotel garni" (bed and breakfasts).

These establishments vary in price from about 60 francs for a single room with a shared bathroom in a simple, but less than salubrious, one-star garni to about 430 francs for a double room, with half board, in a three-star superior hotel.

If you're not too fussy about your digs and dinner, then the Jungendherberge hostel, with its great views of the Matterhorn, a dorm bed, breakfast, and four-course evening meal for about NZ$60 a night, is good value, but comes with a bit of a climb and a culinary experience that won't necessarily have you toasting the chef.

The best accommodation deals in Zermatt, apart from camping in summer, can be found if you travel there with friends and family.

For about half the price of a night in one of the Grand Hotel Zermatterhof's chalet suites, you can rent your own three-room holiday apartment with six beds for a week.

While certainly not as grandiose as some of the village's swanky hotels, most apartments (certainly the three we rented in the past) still boast magnificent vistas of the Matterhorn from their balconies and living rooms.

A holiday apartment isn't just a cheap place to lay your head at night, of course, and having a kitchen where you can prepare hearty breakfasts and cut lunches for the day ahead keeps the costs down, especially considering a pizza and a drink might set you back 30 francs up on the mountain.

Strict restrictions on development have limited expansion of the town over the years, and most things, including the two main supermarkets, remain within easy walking distance of each other.

Should lugging the groceries home prove too much, free electric buses run between lift stops in the village during the day, and little taxis whirr about the place to take you further afield.

These taxis aren't exactly cheap though, and the money saved at the supermarket, can easily evaporate on rides about the place.

Up on the mountain, the best way to get around, unless you're a climber or a mountain goat, is on the alpine trains and lifts.

Prices, for a place where the gondolas climb up to 3800m above sea level, are comparatively steep, but won't come as much of a shock to those accustomed to shelling out for ski-passes at Coronet Peak or Treble Cone: a six-day summer mountain pass costs 243 Swiss francs, and its winter equivalent a hundred francs more.

In contrast to its spectacular backdrop, Zermatt isn't widely renowned for its nightlife, but still numbers a good collection of bars and clubs among its attractions.

If supermarket beers on the balcony begin to diminish in appeal, then the Papperla pub is a fun, lively location for a few drinks on the way home from a day's adventures, and the nightclub downstairs is a popular spot with revellers looking to stretch the night into the next day.

Stops at mountain bars, such as the Olympia Stbli and Hennu Stall, for a mulled wine and some live music are also great ways to cap off a day's skiing or boarding in winter, but it's important to keep in mind that there's still a bit of a ride down to the village before ordering that extra drink.

Like most activities in Zermatt, eating and drinking out can be moderately to outrageously expensive, but dinner and drinks in one of the town's more reasonably priced restaurants, or burgers and chips at the cheery Pstli Pub, are welcome, affordable breaks from home cooking or hostel pasta.

Orson Wells once quipped that the greatest achievement of Switzerland's harmonious history was the cuckoo clock.

Fondue would have to run a close second, and a bubbling pot of this Swiss specialty, shared with friends or family, is a treat well worth indulging in, regardless of the size of your bank account; much like a trip to Zermatt itself.