Another side to Auckland

Rangitoto and the Auckland CBD from the North-Western Motorway. PHOTOS: ELEANOR HUGHES
Eleanor Hughes makes the most of a sunny Sunday morning in Auckland.

A sunny Auckland Sunday morning greeted me when I pulled open the curtains. Pumping up the bike tyres, I blew the cobwebs away cycling into the CBD from West Auckland. Now it was time to ride a more leisurely pace home and enjoy the scenery.

I left Quay St and with thigh muscles burning and teeth gritted, slowly got to the top of the uphill, designated cycle path on Nelson St and the junction of Pitt and Union St. Across the road on what was once the old Nelson St motorway off-ramp, Te Ara I Whiti’s asphalt blazed bright pink. Which is why it’s better known as the Pink Path. Riding its length to Canada St, the motorway traffic thundering below, I cycle on up to Upper Queen St. A right turn, over the bridge and then I’m heading northwest, leaving the city behind. 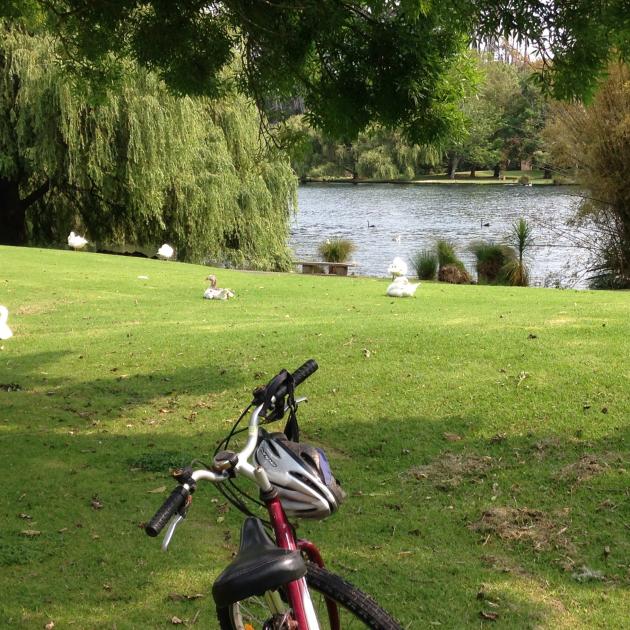 Western Springs.
The North-Western Cycleway follows the North-Western motorway much of its length but that ugliness, and noise, is nicely blocked between the city and St Lukes off-ramp by noise walls and trees. Old inner-city villas clutter the other side, some like new, others shabby. I decide to take a short detour off the trail at the traffic lights on St Lukes Rd for the greenery of Western Springs Park. The Museum of Transport and Technology, next door, is busy with a live weekend which run every third Sunday. I really should visit someday; it’s been about 20 years since the last time ...

I enjoy a drink in the shade of a large tree, its branches spreading wide, and watch black swans glide across the still, spring-fed lake, once the source of early Auckland’s water supply. Children delight, standing on a bridge, in spotting an eel or the gold flash of a fish swimming in the murky depths. Ducks and geese hopeful for food squawk and quack at strollers on the lake path. Beyond the park, which covers 26ha, Auckland Zoo is quiet. In the past, I’ve heard an elephant trumpet or lion roar. 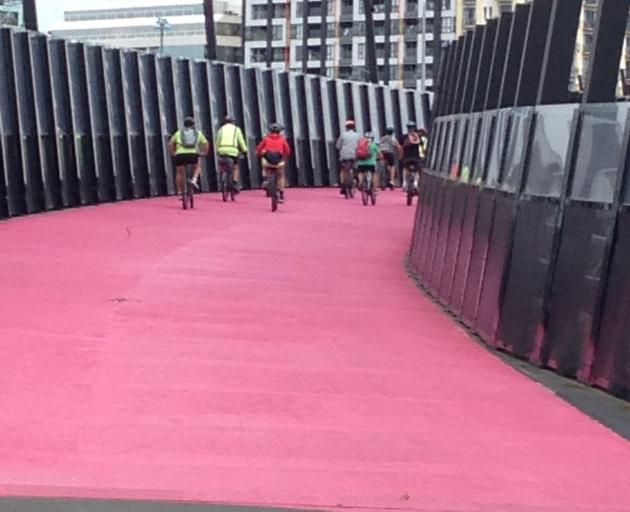 Back on the cycle path I whizz past Chamberlain Park Golf Course, where a few golfers pulling their trundlers behind cross its mown grounds. Sunderland Rd at the end of the path is as usual quiet, and I ride up it to Carrington Rd. I sometimes stopped around the corner on Great North Rd at one of Point Chevalier’s cafes for a drink and caramel slice — got to keep the energy levels up! But today I cross Carrington Rd, turn right and a few pedal-pushes later, turn left and rejoin the cycleway.

The three-storey goldish-coloured brick building on the corner, which could be mistaken for a grand old English home, was once the Auckland Lunatic Asylum. Built in 1865, it housed close to 1000 patients in the late 19th century. There’s talk of ghosts, with 60 patients dying of typhoid there in 1922. It now houses Unitec.

Just before the white bridge leading up and over to continue alongside the motorway, I take a detour and veer left up Great North Rd a little way, to the Oakley Creek Reserve entrance. A short ride on a narrow, muddy path through lush native bush brings me to Oakley Creek Waterfall. Water rushes over the 6m fall draped with greenery either side. Tucked hidden away surrounded by busy roads and streets of houses and businesses, it is like stepping through a portal and finding yourself in a completely different place. I’ve only discovered it in the last year, having lived in Auckland all my life. 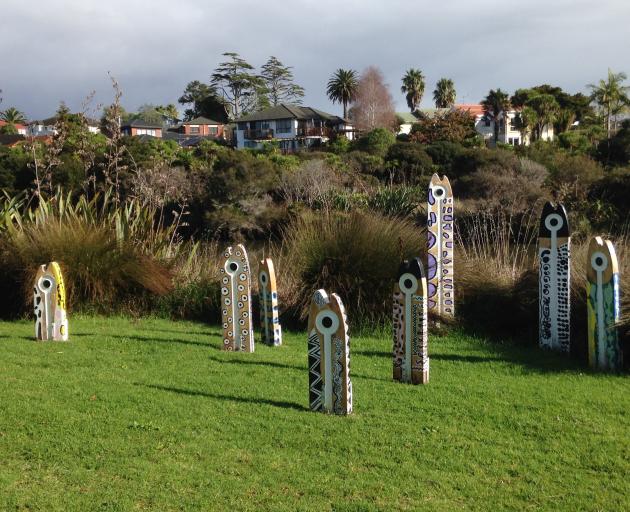 Pou on the side of Oratia Stream representing the perilous journey of native fish.
Retracing my tyre tracks, I head back along Great North Rd, ride up and over the bridge then whizz down. On the other side, to the left there’s access to the Waterview Heritage Area where once a flax mill and flour mill, tannery and brickyard stood in the late 1800s, early 1900s. With a busy motorway junction nearby, it’s hard to believe that it was the site of a small village. Information boards tell of the history and there’s an old boiler once used in the tannery.

Riding parallel to the North-Western Motorway and battling a bit of a headwind, I pass mangroves and mudflats. It’s a nicer view at high tide when the mud disappears. White-faced heron stalk the flats and occasional information boards tell me of other birds that frequent the shores. Close by the Te Atatu off-ramp, launches and yachts sit at moorings either side of the rippling Whau River which heads out to the Waitemata Harbour. Te Atatu Boat Club’s wharf juts into its depths and colourful dinghies stand on their sterns against each other on a platform at the water’s edge. 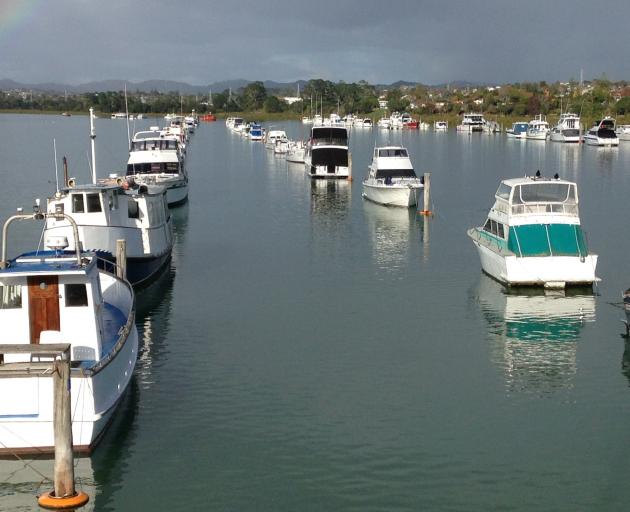 Boats on the Whau River.
I dither at the off-ramp. I could add another 9km or so and divert down to Te Atatu Peninsula. The trail takes cyclists along the peninsula’s edge with views across the Waitemata Harbour to the Harbour Bridge and Rangitoto beyond, and the Sky Tower jutting into the city skyline. At the trail’s end, side streets lead back to Te Atatu Rd which has a village feel, with a number of cafes. Another day ...

I carry on to Henderson and home. Through the tunnel, I enjoy the non-pedalling downhill to an exit marked by a wooden ramp just before the Lincoln Rd interchange. It leads me past the back of Te Atatu South properties with glimpses of Henderson Creek, which becomes Oratia Stream, and native plantings to my right. Walkers share the sometimes twisting, turning path and I slow my pace. Around 18km after leaving the CBD I reach Tui Glen Reserve, the site of New Zealand’s first registered motor camp in 1924.

Once a popular spot, which also included an amusement park, old cabins still stand, although they’re boarded up so a peek inside is impossible. On the side of the stream, a wharf overlooks the brown water. The small red gantry crane that used to put boats in and out of the water is still there. In 1933, the motor camp was advertised as having over 40 different amusements, including swimming, tennis, boating and carpet bowls, as well as free donkey rides for under-12s. Nowadays, there’s a gated camping area for NZMCA members. Original Cabins at Tui Glen, once a camping ground.
The shouts and laughter of children at the reserve’s large playground echo, as I ride through and on to the yellow bridge. Straight ahead is West Wave pool, built for the 1990 Commonwealth Games. I ride to the left, skirting the pool complex, veer left over a bridge and pop out at the side of the two-storey Falls Hotel. Built in 1854 and moved here in 1996 from somewhere down the road, it’s quite possibly the oldest building in Henderson and now the Falls Cafe and Restaurant.

The Britomart-bound train rattles past. Those on-board should cycle instead. It probably only takes about 10 minutes more ... or longer if they enjoy all that the North-Western cycleway offers.