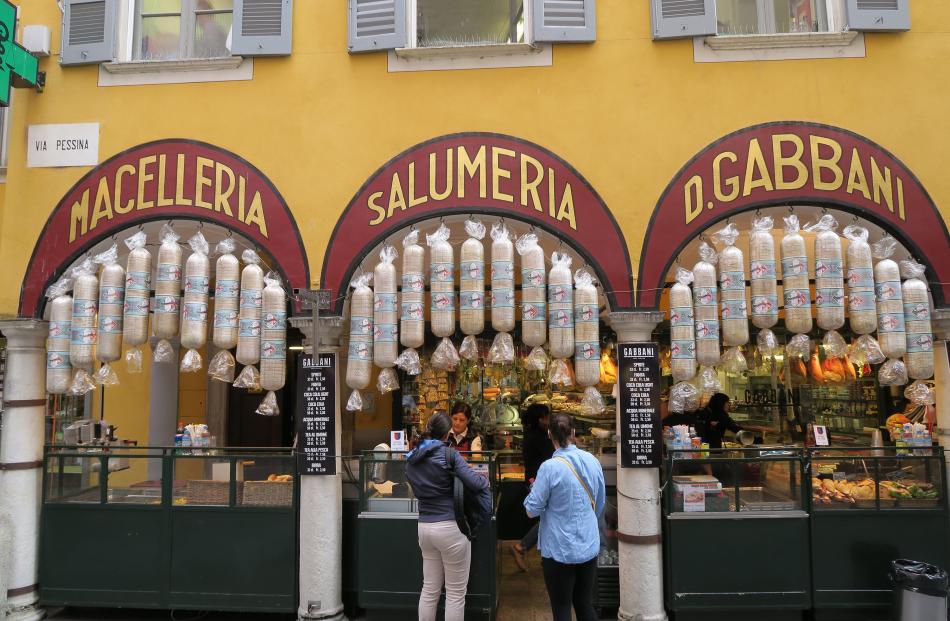 Around Piazza dello Riforma, the main square in Lugano, Switzerland, historic shops and markets are handed down from generation to generation. Photos: Liza Weisstuch 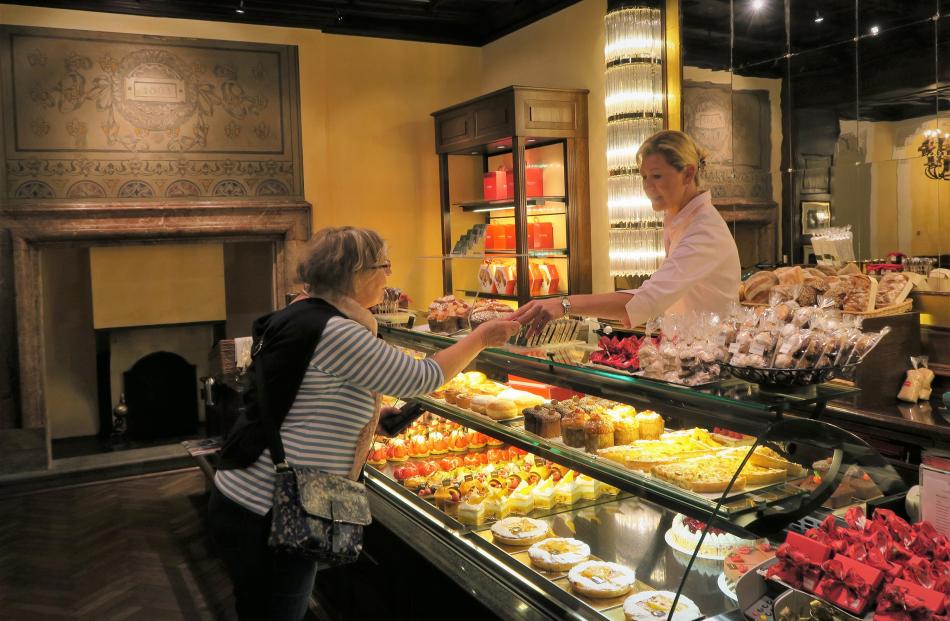 Grand Cafe Al Porto in Lugano has been serving decadent handmade confections since 1803. 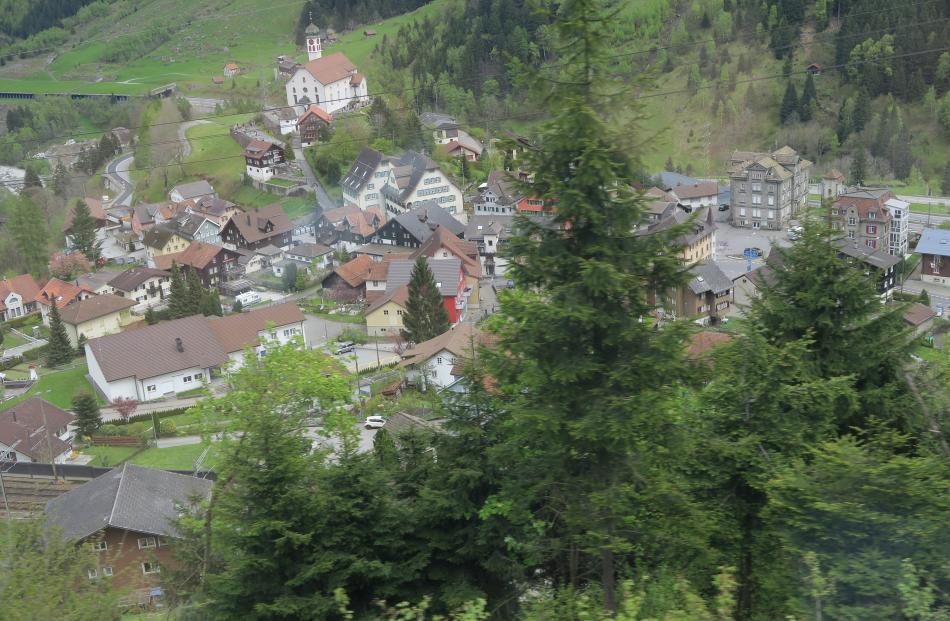 The Gotthard Panoramic Express passes through many small Swiss villages.

Liza Weisstuch finds there is more than stunning scenery on a train trip from Switzerland to Italy.

It takes 27 minutes to pass through the Gotthard Base Tunnel. It’s something of a dreamlike experience: you’re on the train hurtling through lush Swiss scenery — trackside haystacks and farmhouses, small villages with a single towering steeple, distant mist-crowned mountains, and dramatic landscape unfolding in more shades of green than you knew existed — then all of a sudden, everything goes dark. Pitch black. You’re still moving at about 240kmh, but now you can’t see where you’re going.

That darkness, a 56km stretch through a mountain of granite, was unveiled in December 2016. The completed tunnel is part of an epic narrative. The Gotthard Base Tunnel replaced one that took 10 years to construct during the Victorian era. At that time, European commerce was growing briskly thanks to a new-fangled mode of transportation: the railroad. To travel from the medieval city of Basel, in northwest Switzerland close to the French and German borders, to Milan, a commercial centre, took 50 hours across the Swiss Alps by stagecoach. So in 1872, construction began on the tunnel, which would employ more than 2500 miners at a time and ultimately claim 100 lives, especially once they moved from using gunpowder to the then newly-invented dynamite to bore through the solid earth.

The new tunnel, which carries a price tag of $US12billion ($NZ16.6billion) and took 17 years to build, is the longest train tunnel in the world. I relate all this not to bury the lead, but because these are the things you’ll think about as the train emerges into Bodio, a tiny town in Switzerland’s Ticino region. It feels like a world away from the other side of the mountain. You’ll notice how quickly the scenery transformed from mountainous Alpine stretches to palm tree-dappled Mediterranean landscape. Even the outside temperature is a few degrees warmer than it was where the tunnel starts. 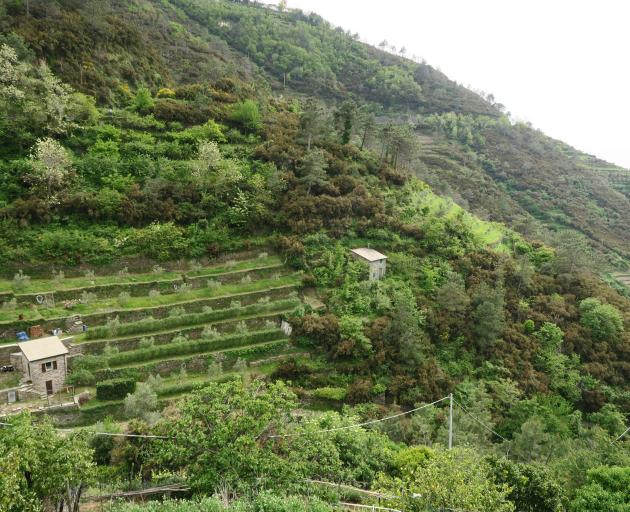 The steep stepped vineyards of Cinque Terre.
You’ll think about these things until your reverie is interrupted by a man with a stoic expression and an old-timey conductor’s cap. He’ll be gently ringing a bell to announce his arrival. He’ll be pushing a cart from which he’s hawking frothy cappuccinos, dispensed from a compact machine, Swiss chocolate bars and croissants, as well as souvenirs such as Swiss Army knives and detailed toy train cars. You’ll snap a photo for Instagram. #railroadgoals. Or something.

The new tunnel is part of the Gotthard Panorama Express, which I rode with a Eurail pass. The Eurail system is an astonishingly expansive network comprised of more than 35 railways — both high-speed and international and smaller regional lines. It covers more than 248,000km through 28 countries. I have always had a fascination with mass transportation. I don’t have a driver’s licence, so I depend on it in my daily life in New York City. Our subway system, a fraction of Eurail’s scope, is the object of much frustration and vilification because of its breakdowns and delays, but frankly, I think it’s more worth noting how many times a day — rather, hour — things run without incident. Amtrak, which can take me 360km from Manhattan to Washington in under three hours at 240kmh, is a pleasure trip. When it works. Catastrophic derailments make headlines sometimes, and delays are frequent. But in my romantic, precision-obsessed image of Europe, I envision the train system as being as unflawed and lovely as other European contributions to the world: Mozart’s operas, Vermeer’s milkmaid, Coco Chanel’s little black dress, baguettes. So it didn’t take a moment’s hesitation when a friend suggested a spring trip across country lines via rail.

Our journey started in Lucerne, a medieval city where German is the primary language, rustic fondue eateries offer all the giddy excess you’d expect, and its moniker as the City of Lights rings true when you stand on one of the historic covered bridges watching the light bouncing off the Reuss River. (In case you’re confused, note that Paris is the City of Light.) As well preserved as the Old Town is, however, shouts of modern Europe can be heard. I found Karel Korner, a cocktail bar that could put any cocktail joint in London or San Francisco to shame. A medley of gin and some unpronounceable apricot ingredient and garnished with rosemary made a mighty fine nightcap.

One of Lucerne’s most famous sites is the Kapellbrucke, a covered wooden footbridge over the Reuss River.
The next day, before my friend and I caught the steamboat that would take us on a nearly three-hour ride across Lake Lucerne to the Panorama train, we stopped at the Swiss Museum of Transport. It’s common knowledge that the Swiss are the standard bearers for monitoring time, but the museum illuminates that they also made groundbreaking developments in how we make our way across the land, through the space we occupy. The first mountain cogwheel train in Europe was built at Mount Rigi in 1871, for instance.

The journey ultimately ended in Lugano, a small town tucked in a bay on Lake Lugano, surrounded by the epic mounts San Salvatore and Bre. Everyone speaks Italian, which makes sense when you learn that it was part of Italy until 1803. I spent the afternoon wandering narrow cobblestone streets that snake around the Piazza dello Riforma, the main square in the pedestrian-only city centre.

Lugano is a financial centre, so all the familiar luxury stores are there, but paces away are various shops and boulangeries that stand like open-air vaults where old-world Switzerland is preserved. At Gabbani Salumeria, bulky salamis are suspended from the arched doorways. More meat hangs from the ceiling inside. It’s easy to imagine that’s how it’s been since the owners’ ancestors opened the shop in 1937. Nearby, fishermen’s nets are draped along bulky iron hooks outside Bernasconi Gastronomia. Inside, the expansive counter displays a bounty of iridescent smoked fish and caviar. I stopped at the stately Grand Cafe al Porto for a cappuccino as locals and travellers, including Clark Gable, have done since 1803. Like so many European cities, old and new don’t clash, they co-exist. The buildings surrounding the square date to the 1600s. The mighty San Maris Angel Catholic Church, its interior adorned with a fresco by Bernadino Luini, Leonardo da Vinci’s protege, was completed in 1499. A sleek concert hall, just a short walk away, opened 2015. 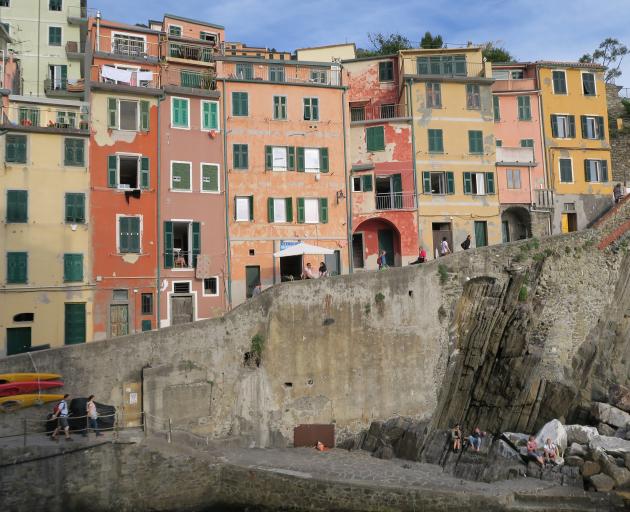 The five fishing villages that make up Cinque Terre, which has been a Unesco World Heritage Site since 1997, are known for their seaside pastel building.
The next afternoon we were back on the train, destination Genoa. Crossing the border into Italy, however, was far less dramatic than careening through a mountain. We passed through towns that looked like bedroom communities of bigger cities. At Balerna, in southern Switzerland, an arrangement of blocky buildings with elegant shutters, manicured lawns, small-domed churches and lots of parking lots, a rowdy group of teenage boys in tracksuits livened up the train car. At the Chiasso Station, situated amid pastel-coloured buildings, a hipster with a fedora sauntered on. When we pulled in at Como, a businesswoman lugging a Gucci bag sat down next to me, barely glancing up from her iPhone.

The train chugged along a countryside that delivered views of electrical towers and smokestacks rising up parallel to church steeples. Other panoramas also showed where industry appeared to threaten to overshadow nature. At Milan, we switched trains for the hour-and-45-minute ride to Genoa, easily one of Italy’s more overlooked destinations.

With a metropolitan vibe yet a veneer of antiquity, thanks in part to the hulking 11th-century Cathedral of San Lorenzo in the centre of town, it’s a city of rich maritime history, narrow medieval streets, ornate 17th-century palazzi, and excellent down-to-earth eateries. Plus it’s a magnificent home base if you’re exploring the Ligurian coast. We decided on a day trip to Cinque Terre, a cluster of five hilly towns, 4000 residents, and terraced vineyards, architectural marvels built into the coastal hillsides. This is a land of heroic viticulture.

At Terra di Bargon, owner Robert Bonfiglio, who makes Sciacchetra, the region’s rare honey-sweet wine, spoke reverently of the old-world process of harvesting grapes on the stepped landscape. Rather, lack of process.

"Going up and down requires a specific know-how, and each worker has his own,’’ he said.

In other words, it’s not easily teachable.

"In the next few years, we have to decide on the economics of preserving tradition,’’ he told me.

He was referring, in part, to the time-intensive process of drying the fruit on stable wood-framed nets for 30 to 40 days, but also to that intrepid harvesting.

En route back to Milan to fly home the next day, I sat next to an older woman in a brown wool suit and bright red neckerchief. She wore giant rings. She was a product of an era that dressed up to travel. Her name was Ida. She didn’t speak English, but a woman in the seat across from us translated, and I learned that Ida’s husband of 54 years just died and she was going to visit his sister in Milan. She showed me his passport photo and her eyes teared up. She took out a piece of bread and offered me some. It was incredible. It was her own recipe and the next thing I knew, she was writing down the recipe in my notebook as I watched the countryside zoom by. A man in a train conductor’s cap was approaching, ringing a bell. 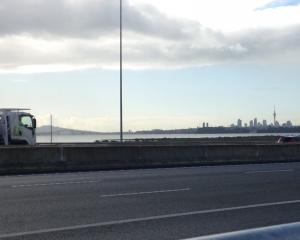 Another side to Auckland