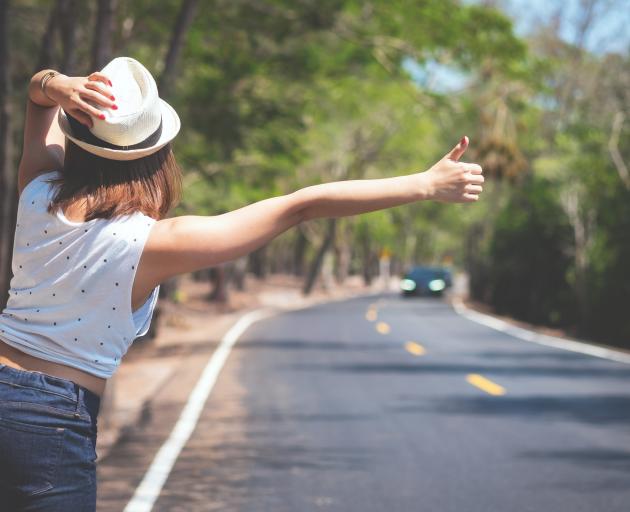 It may not be too late to open yourself to the unexpected gifts and new experiences that hitchhiking brings, says Maureen Howard, who is on her midlife OE.

In late 2015, I hitched approximately 1373km overland, from Dunedin to Auckland via New Plymouth. In the process, I accepted 13 rides with a wide variety of New Zealanders, all of whom possessed generosity and often welcomed some company.

This hitchhike was part of a greater journey for myself. I was just starting an eight-month journey from New Zealand to Northern Ireland, and my aim was to travel without flying to visit family there using low-carbon alternatives. Hitchhiking the length of New Zealand felt a fitting way to say a temporary farewell to my home of 22 years.

As well as being a rather mature hitchhiker, I am also a rather endangered one! Recent comments on Dunedin's talk-back radio shows confirm my own observations that there are fewer fellow hopefuls standing with their thumbs out on the sides of New Zealand roads.

Interestingly, on an international scale, we are doing quite well. According to TravelWiki.org, hitchhiking in New Zealand is still classified as Common, Easy and Legal.

Countries like the UK and the US receive less optimistic classifications.

One exception I spotted is Germany, where hitchhiking is considered Common and Very Easy. Perhaps this is one reason why a relatively large proportion of hitchers we see in New Zealand are young people from that country.

Reasons for the decline of hitchhiking

There are many reasons for the decline in hitchhiking, such as, a reduction in pedestrian-friendly hitch points near expanding cities, economical $1 bus tickets, paranoia-fuelling movies like The Hitcher, excessive media attention, and cheap car imports flooding the market.

Sociologists Graeme Chesters and David Smith (2001) have researched trends in hitchhiking in the UK. From their analyses, they conclude that the main reason that hitchhiking has declined there since the 1970s is simply due to the increase in private car ownership.

But perhaps hitchhiking is not in as much decline as we imagine. The modern equivalent of sticking your thumb out is the online ride-sharing movement in which you can offer or request lifts either free or for a small cost.

The self-proclaimed most popular website for ride-sharing in Dunedin is at www.carpoolworld.com (search Dunedin, NZ).

But, personally, I prefer the spontaneity and unpredictability of the old-fashioned thumb over the computer.

Hitchhiking is good for our planet, for the simple reason that it turns single-occupancy car travel into shared travel, thus reducing the personal carbon footprint of each occupant.

On the Enviro-Mark Solutions website that provides a Carbon Calculator for different types of travel options, hitchhiking comes out at 0.07kg of CO2 equivalents emitted per person per kilometre.

Thus, picking up a couple of hitchhikers will greatly help you reduce your carbon footprint.

Apart from the lofty goals of mitigating climate change, there are, of course, many other reasons why people hitchhike.

Perhaps the biggest one for me is that once you get over the initial embarrassment of standing at the side of the road with your thumb out, it is actually a very enriching experience!

On my trip north, I had numerous unexpected and positive experiences, lengthy conversations with a variety of people that I would never have normally met, and taking rides in unusual vehicles such as a truck containing small trees, a horse float, and a police car.

Invariably at the end of each day, my hitchhiking adventures left me tired but brimming with joy from my experiences of human kindness.

For example, one young woman from the Czech Republic decided to take me to my final destination in Christchurch, forgoing her shopping foray to purchase a new pair of trainers.

``Drivers were so generous to me when I was hitchhiking myself back in my own country. I want to pass it on,'' she told me.

Another unusual and uplifting hitch was with an on-duty policeman. At first I expected him to chastise me for hitchhiking solo. Instead, he was full of enthusiasm and encouragement as I outlined my hoped-for travel adventures to Central America.

There was just one somewhat unsettling ride on this journey to Auckland.

A driver informed me that many years ago he had had a head injury in a car accident that had left him without the ability to feel the emotion of love.

``So when did your ability to feel love return again?'' I asked innocently. ``It hasn't,'' he replied.

I spent the rest of that trip being especially agreeable and exuding all of the positivity I could muster! All was fine.

Positivity helps. People's moods both affect and reflect the people around them. If you are genuinely positive, friendly and accepting of others, you are much more likely to experience a similar response in return.

Hitchhiking will provide ample opportunities for honing your social skills.

Through hitching, I have had many opportunities to relate to people with backgrounds and views very different from my own. Views such as: Bring back the death penalty! ... Lock 'em up and throw away the key! ... There's no such thing as climate change, it's just the sun spots/our government's conspiracy to make money/attention-grabbing scientists!

Without doubt, learning to be agreeable is an essential skill for the hitchhiker. If only I could generalise this useful hitchhiking skill to the rest of my life!

As a female hitchhiker who does not look at all threatening, I get lifts easily.

If you have not hitched before, I recommend you begin with an experienced friend.

An excellent website to read before you stick your thumb out is HitchWiki.com. Here you will find tips on where to hitch in the various countries you visit, what to wear, safety tips and so on.

Wearing bright, clean-looking clothing has been found to improve hitchhikers' rates of getting a ride. Personally, I also like to have a placard with my day's destination on it. Along with my backpack, it formalises my status as a ``serious traveller'' and increases my likelihood of getting where I want to go with fewer lifts.

A small gift, though not necessary, is appreciated.

Although the actual risks of hitchhiking are low, they are potentially serious.

The more I travel, the more I trust my instincts, and for this reason I do not want to encourage young, inexperienced or less confident people to hitchhike alone.

The HitchWiki site has a multitude of tips to increase your chance of travelling safely, such as travelling in pairs, not taking lifts with more than one man, travelling during daylight hours only, texting (or pretending to send) registration plate details to family members, never falling asleep in the car, and sitting in the front seat.

Most importantly, if you think you might be in an unsafe situation, stay calm, confident and don't panic. The HitchWiki site has recommendations on what to do should you want to get out of the car quickly. Please do check this site before setting out on your journey.

To my mind, seeing plentiful hitchhikers in our communities is analogous to seeing canaries alive in the coalmine. For hitchhiking can only thrive in a society that is healthy.

Mutual trust is essential for a community to function, and good levels of trust are required on the part of both the hitchhiker and the driver offering the lift.

When I started hitchhiking at the age of 18, I did it simply because it was a cheap way to travel as a student on a limited budget. Now, some 100 or so hitchhiked car-trips later, I like to think I am doing my small bit to help revive a community-connecting activity. And, of course, it's also fun.

So unplug your iPhone and stop for the next hitchhiker you see. Let's re-embrace this community-building activity.

My next hitchhiking adventure, I hope, will be around the west coast of Ireland. Like New Zealand, it is still categorised as Common. But with only a Medium ease of getting a lift, I expect I may have to wait a little longer than I am used to at home in New Zealand.

For more discussion on the positive benefits of hitchhiking, you can listen in to my radio-show podcast with fellow hitcher and Dunedinite Paul Armstrong on Otago Access Radio's website.

Until 2015, Maureen Howard was a tutor with the Sustainable Living Programme, www.sustainableliving.org.nz, for the Dunedin City Council.