An assortment of travellers prepare to leave Mangapurua Landing by various means. PHOTOS: ELEANOR HUGHES
While we cannot travel at the moment we have plenty of time to dream and plan. Seeing a bit more of our own country might be the 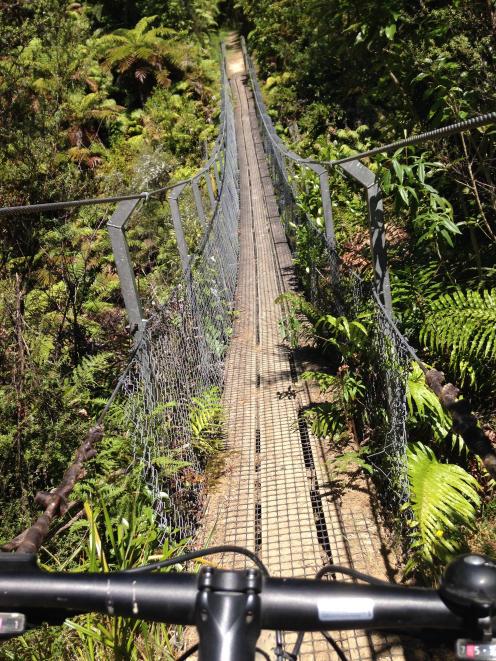 A swing bridge on the Mangapurua Track. PHOTO: ELEANOR HUGHES
first option when travel restrictions end so Eleanor Hughes provides some inspiration with her journey on the Mountain to Sea Trail in the North Island.

Pine  trees, flowering manuka and rolling farmland, the views from Ruatiti Bridge to Nowhere Backpackers in the middle of nowhere are enveloped in mist when I awake. It’s chilly, but I soon discard my thermal top cycling 3.5km to the start of Mangapurua Track.

The trail-head sign, at the intersection of Ruatiti and Crotons Roads, states it’s 35.9km, five hours 35 minutes cycling, to Mangapurua Landing. We have a jet-boat to catch from there at 4pm, six hours away. Should have left earlier ...

Ferns and native bush add a freshness to a car-width trail of rock, dusty dirt and gravel which is an uphill slog. Ange disappears on her e-bike.

Thigh muscles burning, I grit my teeth and navigate potholes. Stopping for a breather and to wipe dripping sweat away, I take in the deep-green bush, which ends where Mount Ruapehu juts up, a smattering of snow still in its upper valleys.

The sound of an approaching vehicle disrupts the peacefulness and eventually a UTV appears around a corner. The pig hunters, four dogs on the back and rifle across the front, stop for a chat. They’re farmers from Middle Road, not far from Ohakune. Apparently, a group of cyclists are ahead and we’re assured we’ve got plenty of time to make Mangapurua Landing.

A green DOC sign announces the start of the Whanganui National Park, the slog continues. Small wooden signs engraved with surnames — McIntyre, Hughes, O’Rourke — are dotted along the way. Perhaps they mark farms hidden deep in the bush, but there’s no driveways anywhere.

At the junction of Mangapurua and Kaiwhakauka Tracks a red, carved totara pou is vivid among the greenery. Evidently it symbolises the forest and gives spiritual safety for visitors, which is reassuring. I’ve been a little anxious about this advanced graded trail, having read of steep bluffs, narrow trail and rock falls and the recommendation to carry a personal locator beacon. We are not advanced riders. And the proprietor at Mountain Bike Station in Ohakune gave me a lesson on how to fix a broken chain ... because there’ll be no-one around to help. We carry a PLB.

A signboard states 25.1km, three hours 35 minutes, to Mangapurua Landing. We should be fine.

Signboards mark abandoned farms along the trail.
Fifteen minutes later, at Mangapurua Trig, we come across the other cyclists and I discover the significance of the named wooden signs. They do mark farms, abandoned ones. Embossed in gold on a black memorial are the surnames of World War 1 returning servicemen who settled farms in the Mangapurua and Kaiwhakauka Valleys in 1917, 46 of them. Photos of the men are on an information board along with a map of where their land lay. It was a harsh, isolated area made worse when the hazardous access road was closed in 1942 leaving farmers with no means of trading and thus farms were deserted.

A high point offers better views but we’ve had enough of climbing and the clock is ticking. It’s pretty spectacular from the trig anyway. Hills of dark green, beyond lighter hills of green, beyond lighter undulate like a choppy sea. Close by, the bush is cut by a pale brown line disappearing downwards. It’s a downhill trail from here.

Reaching a swing bridge, we discover the entrance is as wide as our handlebars, which is a problem. The panniers on the back of the e-bike, carrying everything we need for our five-day Mountain to Sea ride, are wider. We remove them, walk the bikes over the swaying, juddering bridge, then the panniers, and reattach them. It takes a while.

At the next swing bridge, Ange at the handlebars, I push and shove the e-bike through each end, then go back for mine. It’s a lot quicker. We’re faced with more bridges, losing count of the number we cross.

Ready to start the day at the Ruatiti Bridge to Nowhere Backpackers.
Between them, we skirt greyish-brown rock falls spilling on to the track, enjoy rolling downhill and pass ‘‘Papa Drive’’, a yellow road sign pointing into bush. There’s no road in sight.

The other cyclists leave Johnson’s Campsite, a large open grassed area with toilets, as we arrive. They’re watching the clock too. Someone’s makeshift home, a tent beneath a tarp, stands in a dim tree-covered spot along with a sink, a drum-type Barbecue, a bow hanging in a tree and an animal skull alongside. It’s deserted.

Signs marking abandoned farms continue to dot the trail. Occasional grassy, open spaces provide different scenery from the forever bush sprinkled with white manuka flowers looking like a dusting of snow on the canopy. The trail narrows and orange plastic nets are like a flashing alert, providing barriers to steep drop-offs. I take heed of ‘STOP, Cyclists must dismount’ signs. The netting looks unlikely to stop a careering cyclist or even a wobbly one.

We skirt Cody’s Bluff, then Battleship Bluff where I push my bike as fast as I can past papa cliffs, an eye on grey slabs of rock that look like they may shear off at any time. Fallen boulders on the trail would have flattened cyclists passing at the wrong time. Far below is a glimpse of the green, tranquil Mangapurua Stream, a blue spot reflecting the sky. 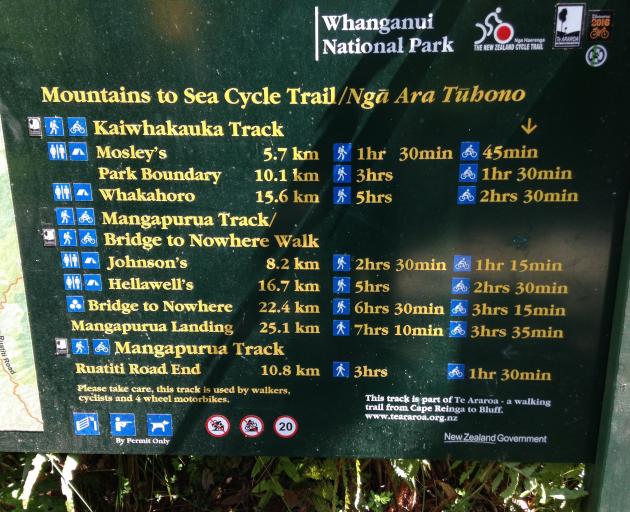 How far to go to Mangapurua Landing.
Rounding a corner, in the middle of nowhere, it’s a shock to see people. Lots. And a bridge. Along with the cyclists we met earlier, there are maybe 20 canoeists who have walked the 40 minutes from Mangapurua Landing. It’s kind of disappointing having to share the Bridge to Nowhere with so many after enjoying the trail to ourselves.

I peer over the bridge’s concrete sides at a far below patchwork of verdant green textures, ponga resembling erected umbrellas. An information board tells the structure’s history, of settlers and abandoned farms. The bridge, built in the mid 1930’s was little used by the farmers it was built for. By 1942, only three families remained in the area and they were forced to leave when the government closed the valley.

A hundred metres further on we abandon our bikes for a short walk up to a viewpoint. I look down to the bridge. So out of place, so picturesque.

Back on our bikes, we share the flattish trail with walking canoeists and 20 minutes later, with 20 minutes to spare, reach the Mangapurua Landing. Relief! The large, flat rock area cluttered with bikes leads down to the Whanganui River. A few sweaty cyclists cool down in its green waters and canoes, laden with gear, await paddlers.

Our only way out of here, other than backtracking 35.9km, the Whanganui River Adventures jet-boat roars towards the landing.