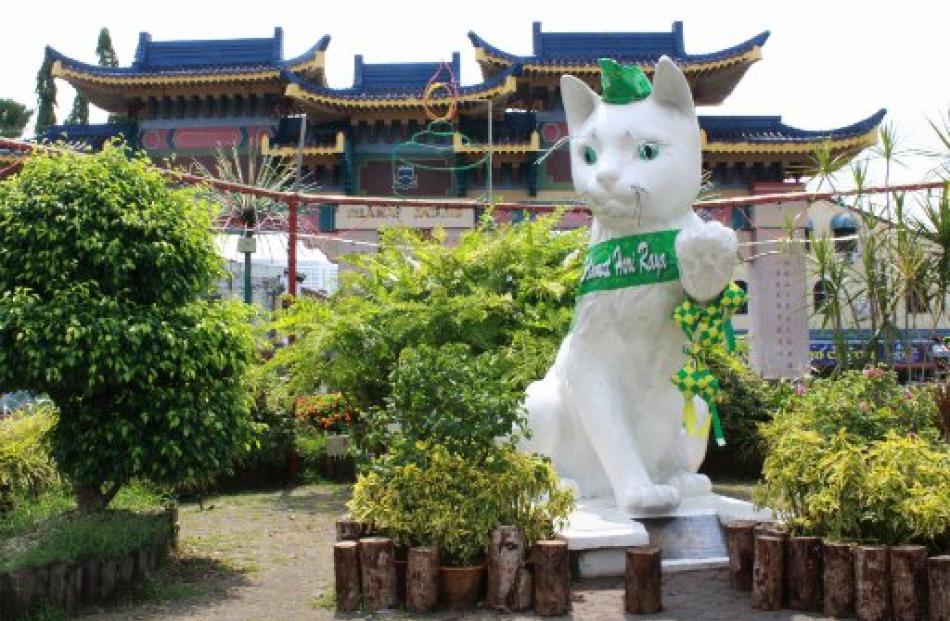 A giant cat statue - sporting a green ribbon to celebrate the end of Ramadan - guards the entrance to Kuching's Chinatown. Photos by Jim Eagles. 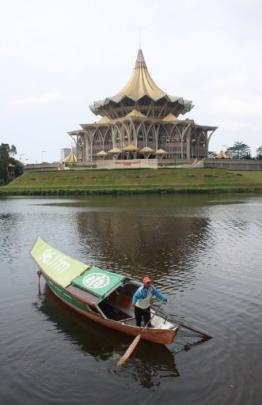 The new state assembly building at Kuching, Sarawak, on the island of Borneo. 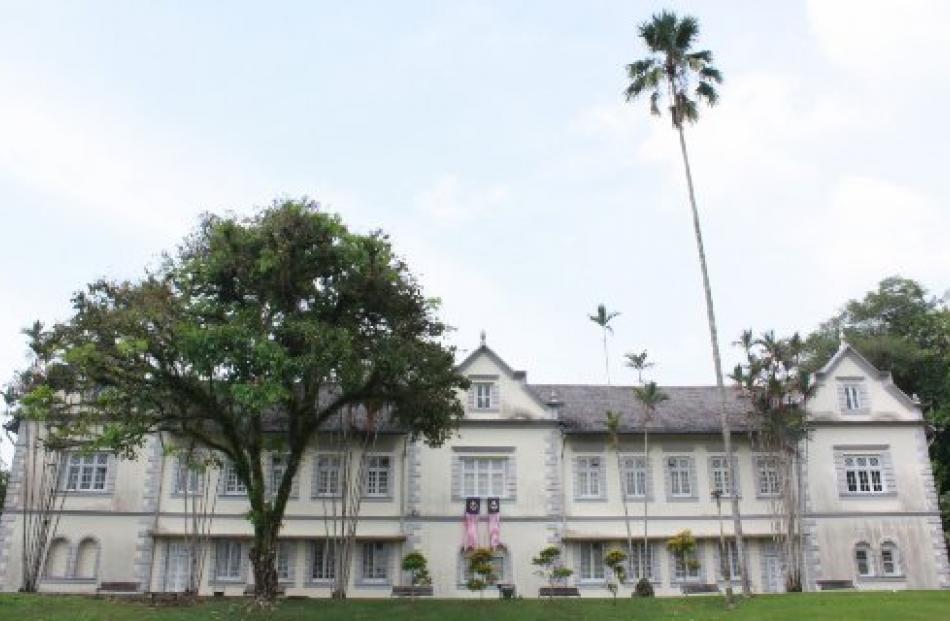 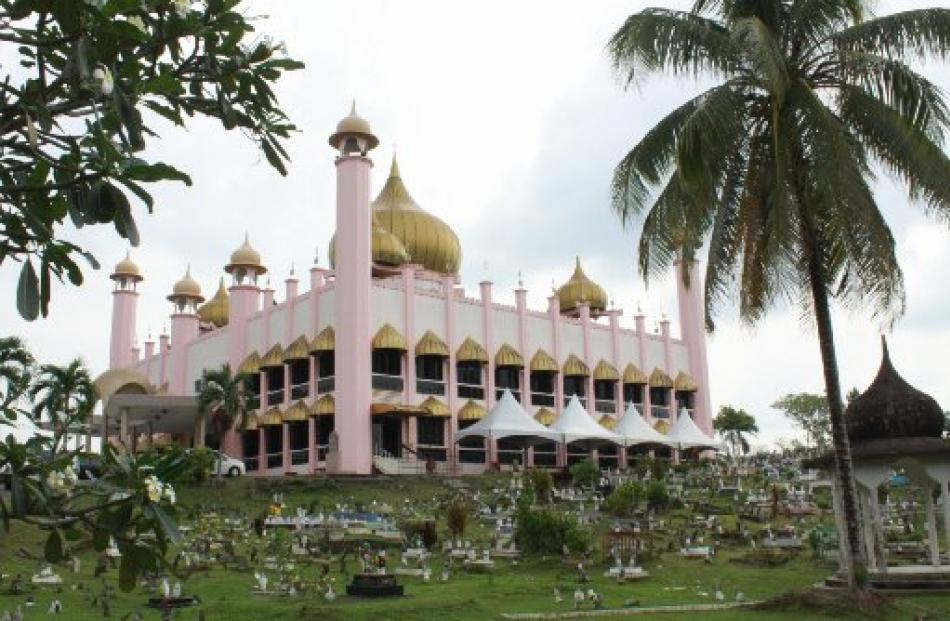 An elegant pink mosque, one of the city's more traditional sights. 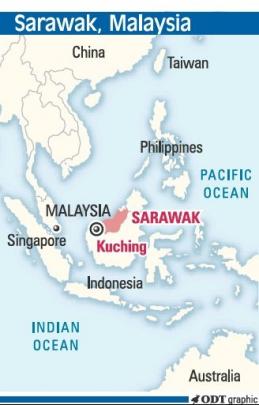 For about 100 years, the city of Kuching, capital of Sarawak on the island of Borneo, was ruled by the legendary White Rajahs. Now it seems to pay homage to the domestic cat.

Take a tour of Kuching and you certainly see the more normal sights, such as a brilliantly decorated Chinese temple, an elegant pink mosque, traditional Malay stilt houses sharing the banks of the Sarawak River with a magnificent new state Parliament, a lively market and a Chinatown.

But it is cats and the memory of the White Rajahs - the three generations of Britain's Brooke family - which dominate.

The rajahs are the easiest to explain. The first, James Brooke, was given a huge slice of Borneo by the Sultan of Brunei as a reward for saving his kingdom from rebellious Dyak tribes, and he set himself up as its ruler in 1841.

Despite a spectacular construction programme fuelled by Sarawak's oil and gas riches, the highlight of the city is still the Astana - the elegant white palace on the banks of the river built in 1870 by the second White Rajah, James' nephew Charles Brooke, as a wedding gift to his wife.

The palace is not open to the public because these days it is the official residence of the Governor of Sarawak, but visitors can explore the superb gardens.

I spent a pleasant half-hour sitting on the bank opposite, sipping a cool drink from one of the riverside stalls, watching the little water taxis zip to and fro, admiring the palace's old-world charm and dreaming of a time when a young Englishman could make himself into a rajah.

If James was the city's founder, Charles seems to have been its builder, transforming Kuching into a modern Western city with all the latest amenities of the time.

The plaque outside the Sarawak Museum - described by our guide, Taylor, as "one of the finest in Southeast Asia" - said it was built by Charles Brooke in 1881 to display the wildlife and handicrafts of Sarawak.

It certainly does that, displaying everything from a headhunter's house complete with skulls to an orangutan skeleton, a collection of blowpipes and a display of Borneo's hugely beaked hornbills.

On a poignant note, there is also a collection of swords used by the White Rajahs, including a Japanese sword presented to Vyner Brooke, the third rajah, who lost his kingdom to the invading Japanese in 1941.

After the war, Vyner returned to Sarawak and ruled for a further 75 days before bowing to the inevitable and ceding Sarawak to the British Crown.

But if all that was straightforward, discovering why a large statue of a white cat, dressed in green, occupies pride of place in the heart of the city, was not.

Taylor told us it had been erected by the council of the Chinese-dominated South Kuching - the Malay and Indian-dominated north Kuching is a separate city - and was wearing green to mark the end of the Muslim festival of Ramadan.

"The cat is dressed in different costumes when there are different festivals," he said. "So now it wears green for Islam, but if you come at other times you will see it wearing Chinese, Malay and Indian costumes."

Okay, but why a cat? And how come the boundary between the two cities held an impressive monument with cats carved on a column and four more cats guarding its base?

Kuching, Taylor said, was named after a fruit called cat's eye, which tastes like lychee. So the cat became the symbol of Kuching. Or at least I think that's what he said.

There was mumbling in our bus as we headed back to our ship, Orion II, berthed in the Sarawak River. Surely there must be more to it than that? If there was, Taylor did not know.

I have since looked it up.

According to Wikipedia, the city was originally known as Sarawak, but in order to distinguish it from the wider province, Charles Brooke named the place after the tidal river, Sungai Kuching, which flowed from the nearby hill of Bukit Mata Kuching, where there was an abundance of a fruit called green longan, but popularly known as mata kuching or cat's eye.

So Taylor was right.

Checklist
Getting there: Singapore Airlines flies up to three times daily from New Zealand to Singapore and then to Bandar Seri Begawan five times a week. SilkAir flies to many destinations in Borneo including three times a week to Kuching, daily flights to Kota Kinabalu and six flights a week to Balikpapan.
Getting around: Orion II has Borneo departures next year in January-February and again in July-October. Ten-night fares start from $10,100 a person.