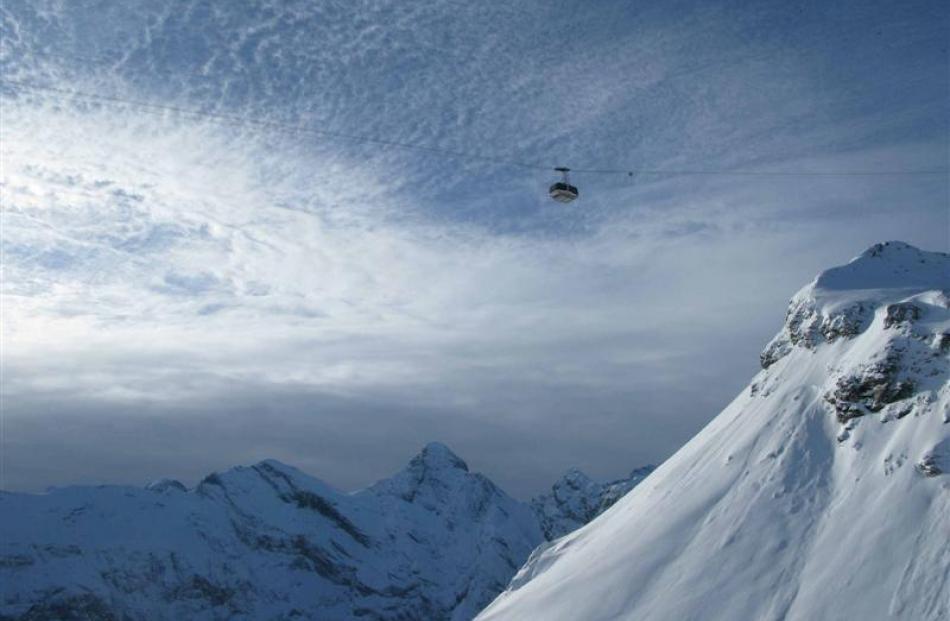 A gondola at Mürren. The skifield is also serviced by chairlifts and rail. Photos by Jeff Kavanagh.

Live somewhere long enough and you're bound to get a bit complacent about its charms.

Just ask someone who lives in Queenstown how they feel about The Remarkables and although they'll undoubtedly appreciate their beauty, they're also unlikely to sigh in awe each time they catch a glimpse of the mountain range.

Similarly, while riding the train from Zurich to the ski resort of Mürren in Switzerland, it wasn't difficult distinguishing the locals from the tourists, and not just because many of the latter were clad head-to-toe in an alpine-adventurer look.

While the local Swiss browsed newspapers and sent text messages, the rest of the passengers in our carriage frequently shifted seats, pressed their faces to the windows and exclaimed in eight different languages something along the lines of "Look at that!" as we sped through a wintry landscape of glassy lakes and looming peaks.

Also, the further we got into the mountains, the greater the ratio of digital cameras to passengers became until, once on the Jungfrau Railway, there was practically no-one left on board who wasn't transfixed in one way or another by the scenery.

It is a remarkable railway line, climbing from the town of Interlaken up to 3454m and boasting the highest train station in Europe - the Jungfraujoch station. So, it was with reluctance that my girlfriend and I had to leave it early on its route up the narrow Lauterbrunnen Valley.

Happily, our disappointment was short-lived, and later, after a short gondola ride up a very steep hill, we were back on an alpine train, threading our way through snow-laden pines and on towards the lovely village of Mürren.

Clinging to the side of a mountain, a thousand metres above the valley floor, the village is not a quintessential Swiss ski resort, in the style of luxury destinations such as Davos or St Moritz.

Small and peaceful, with a permanent population of 450 and a couple of sizeable, but largely inconspicuous hotels, there is no real après-ski see-and-be-seen scene here, and though the odd full-length-fur-coat-clad individual sashays through its quiet streets, ostentation is kept to a minimum.

Instead, Mürren is the sort of place you could easily imagine Heidi and her mountain goats holing up in for winter; a sensation heightened by the village's absence of public roads and use of sleds for transportation during the snowy months.

Most of the accommodation in Mürren is of the small hotel or holiday apartment variety, and our lodgings, the family-run, three-star Hotel Alpina, came with half-board and a wood-panelled room. 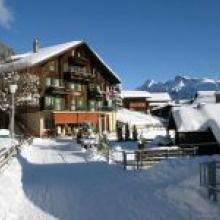 Heidi's place ... The village of Mürren.
Not quite big enough to swing one of Heidi's horned charges around in, it was still comfy enough and its balcony afforded us breathtaking views across the narrow valley to the magnificent Eiger, Mönch, and Jungfrau mountains.

Such spectacular terrain has endowed the village and its surrounds with a long tradition of being a winter-sport destination and it's almost 100 years since the first British tourists began coming to Mürren - the first-ever competitive slalom course being set up here in 1922.

Back then, skiers had to tie on snowshoes and climb for a day to get a decent run down the mountain. And while the occasional enthusiast still trudges up the mountain under their own steam, we chose to admire their travails from the cable cars, chairlifts, and railways that serve the resort's 52km of piste.

One of Blighty's most famous thrill-seekers played by Australian George Lazenby), James Bond, made a flying visit here in the 1969 film On Her Majesty's Secret Service, popping into Mürren's famous revolving restaurant, Piz Gloria, which masqueraded as a baddie's lair.

Situated at the summit of the resort, almost 3000m up, in its everyday guise you can sit at one of its tables and be rotated 360 degrees while taking in a panorama of some 200-odd peaks and munching on a 007 ice-cream sundae. For us, however, 20 minutes admiring and taking snaps of its amazing vista was enough; the fresh fall of powder that had closed the peak the previous day was slowly being carved up below us, convincing us to abandon the view and get back on our boards.

On the slopes, things are as laid-back as they are in the village. There's little queuing for lifts, plenty of places to venture off-piste, and some nice spots to reward a morning's riding with a leisurely lunch.

Recommended to us by a British couple who'd been coming to the resort for more than 20 years, Suppenalp was perhaps the best. A simple chalet, with a crackling fire, a brace of boozy chefs, and a menu that featured bison steak and homemade chocolate cake, it was a remarkably easy place to spend a few hours and a wad of francs.

Naturally, given that tourists primarily visit Mürren for its crystal-clear air and the thrill of its landscape, nightlife in winter tends to revolve around dinner followed by drinks in a hotel bar, or a trip to the village's ice rink.

A couple of hotels have nightclubs buried in their basements, but a mulled wine in an old, converted gondola while watching a group of tiddly tourists trying to hit nails into a block of wood was as rock 'n' roll as our nocturnal activities got. Infinitely more rewarding was sitting at our breakfast table each morning, happily staring out at the peaks above and the abyss below.

On our final day in Mürren, as we laced up our boots in the hotel's foyer, a guest from Slovenia was settling his bill with our host, who inquired if the man had had a good time.

The Slovenian said he had and remarked how he envied the hotelier living somewhere as beautiful as Mürren.

"Yes, it's very nice," our host replied, laughing. "But, we're used to it. Like everyone we dream of being somewhere different - a warm beach would be good."

Listening to their conversation, it was tempting to imagine the hotel owner didn't know how lucky he was; judging by the big smile on his face, however, he clearly did.

• For more on Mürren go to www.muerren.ch

HOTEL ALPINA
Double room with half-board (breakfast and a four-course dinner) from CHF90 ($NZ129) per person per night.
www.muerren.ch/alpina.