It’s worth getting up at dawn to see the stunning view across Lake Wakatipu from Aro Ha retreat. PHOTO SUPPLIED
With the year we’re having, all of us deserve an epic holiday. Dreams of a Bali yoga retreat or a trip through Europe have to remain just a dream for now. But that doesn’t mean you can’t have an unforgettable holiday, right here in our own backyard, discovers Gina Dempster. 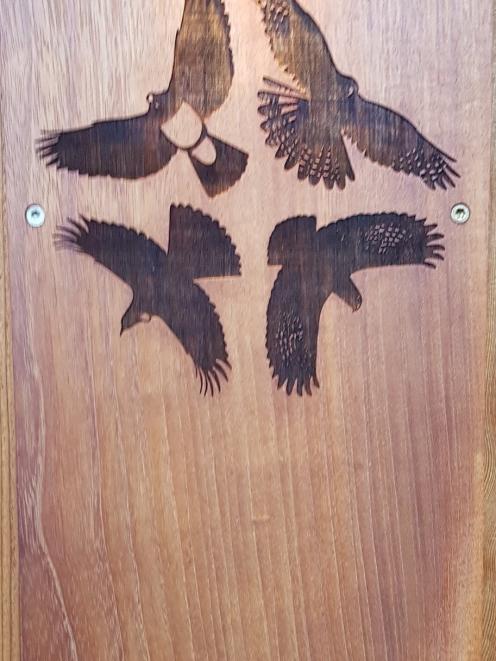 Every guest is identified by a native bird. My alter ego is New Zealand’s falcon karearea. PHOTO: GINA DEMPSTER
Aro Ha retreat, near Glenorchy, is only 90 minutes’ drive from my home in Wanaka. It’s described as “a multi-award-winning retreat where wellness traditions meets luxury”.

I’m not sure what to expect other than it will be beautiful, and that there’s no caffeine (eek!).

Lake Wakatipu is distractingly beautiful as I drive along the Glenorchy-Queenstown road, through the retreat’s electric gates. The cedar-clad retreat buildings sprawl across a high knoll above the lake, looking out over Pigeon Island/Wawahi Waka. It’s a landscape straight out of The Lord of the Rings, so stunning that it’s hard to believe it’s real.

Manager Paula Ryan greets us in the lounge with herbal tea and tempting snacks which, like all the cuisine at the retreat, are entirely made from plants. We sink into massive sofas, not able to take our eyes off that incredible view. Slowly we start to let go of the rush of the world outside. I’m not a big lover of herbal tea normally, but here it tastes delicious. 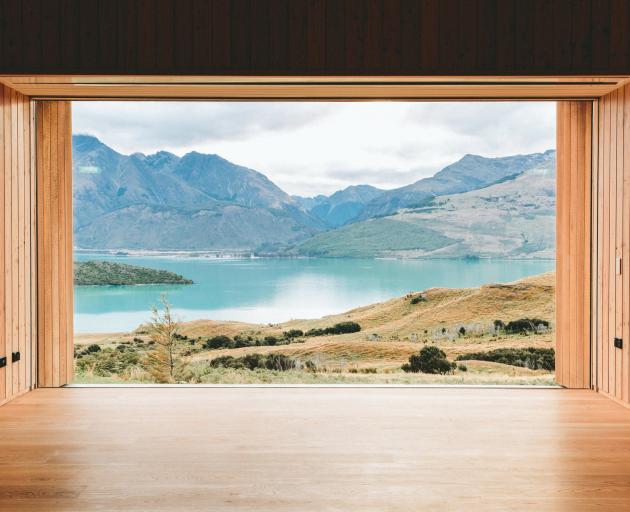 The Aro Ha yoga room looks out over a backdrop straight out of the The Lord of the Rings. PHOTO: SUPPLIED
Paula tells us we can put away our watches (and phones, if we choose) while at the retreat. Staff will come and find us if we need to be anywhere, and there’s an intercom system in our rooms to let us know what’s happening. We don’t even need to set an alarm, because someone rings a melodic Tibetan bell outside our rooms in the morning. Not keeping track of time is unsettling to start with, but as the week progresses it becomes relaxing to hand over control of your schedule to someone else, especially if you’re addicted to the stress of always running just a little late. 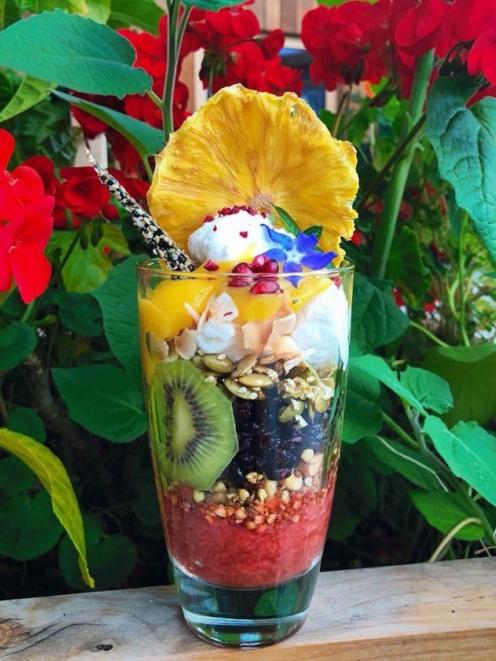 Breakfast parfait — Aro Ha food is a treat for the eyes as much as for the stomach. PHOTO: SUPPLIED
The retreat runs a research-based programme focusing on daily habits, such as meditation and yoga, which can improve physical and emotional health. The mornings start early with sunrise yoga in the Aro Ha room. Watching the sun rise over the lake (mostly) reconciles me to getting up that early on holiday. A shot glass of ‘‘elixir’’ — made from citrus juice, apple cider vinegar, turmeric and chilli — delivers a morning jolt nearly as effective as caffeine.

After yoga, we run over to the dining room for breakfast. Each meal is so beautifully presented that it almost seems a shame to eat it, but it doesn’t hold us back for long. The table is set with a bowl each of dried blueberries, coconut yoghurt, banana, gluten-free muesli and fruit. Like all the food at the retreat, it’s absolutely delicious, and an eye-opener into how satisfying and filling plant-based food can be.

Despite its sub-alpine location, the retreat grows a lot of its own food. Even in winter, our meals include kale and greens grown in the greenhouse and conservatory. During the summer, an orchard and vegetable gardens provide approximately 35% of the food eaten during retreats.

Aro Ha’s spa buildings include two saunas, massage rooms and a huge outdoor spa.PHOTO: NEVILLE PORTER
After breakfast, it’s time to move. Each morning there’s a hike into the hills, with old mining huts and ruins to explore. If you’re not excited by getting into nature, you can chose to enjoy the view from the outdoor spa or curl up on a window seat in the library with a book. Tempting as that is, I can’t turn down a chance to blow the cobwebs out and get out into the beautiful landscape that surrounds us.

One morning we head up to Jean Hut, built about 80 years ago from a patchwork corrugated iron. The roof is held down by giant boulders on the end of chains, like a hut in a fairy tale. It bears witness to the harsh weather conditions that the people who built and stayed in these huts endured. About eight of us crowd into the tiny hut, blowing on our fingers as the tussock outside is still covered in frost. A couple of hours later, I’m warming up in the sauna with a view, which seems even more luxurious compared to the basic shelter up in the hills. 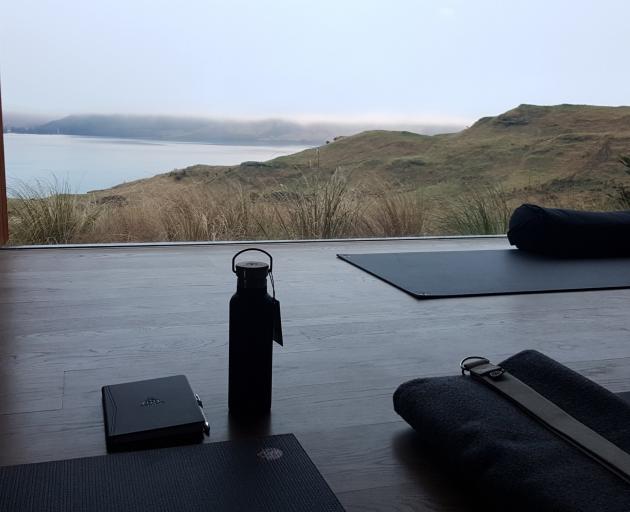 The twice-daily yoga sessions are designed for guests with all levels of experience, from beginner to yoga teachers. PHOTO: SUPPLIED
In the afternoons, the staff share some of their skills and passions in hour-long workshops. The talented chefs talk about plant-based cooking and fermented food, showing us how to make sauerkraut and kombucha to promote gut health. Other staff encourage us to meditate, try functional strength training and journal-writing. Founder Damian Chaparro makes us all laugh, while ensuring every guest leaves feeling restored and rejuvenated.

We’re encouraged to pay attention to the simple things around us: breath, food, nature. It’s not so hard when everything is so beautiful. Gravel paths lined with tussocks link the chalets, each with four bedrooms. The wooden-clad Scandinavian-style buildings are toasty warm, with triple-glazed windows. The retreat is self-sufficient in energy, with its own solar panels and water turbine, which banishes my Dunedin-bred guilt about walking on beautifully warm wooden floors. 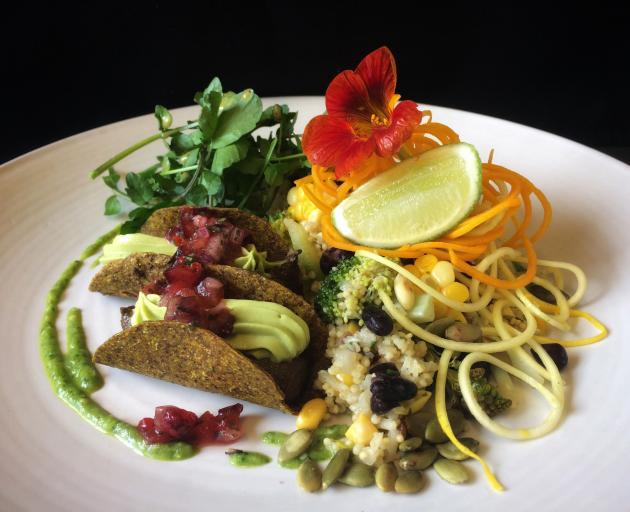 The Aro Ha kitchen mixes techniques such as fermenting, roasting, dehydrating and raw cuisine. PHOTO: SUPPLIED
There’s no feeling guilty about the massage we get every single day! The massage therapists are all excellent, and even on day four, they can still find tight bits to release. I start wondering whether, like a flightless bird, I’ll be ill-equipped to survive out there in the real world.

Too quickly, the last day arrives. The reset has done its job: my body feels younger, my mind feels clearer, my jeans fit better and (apparently) even the whites of my eyes are whiter. 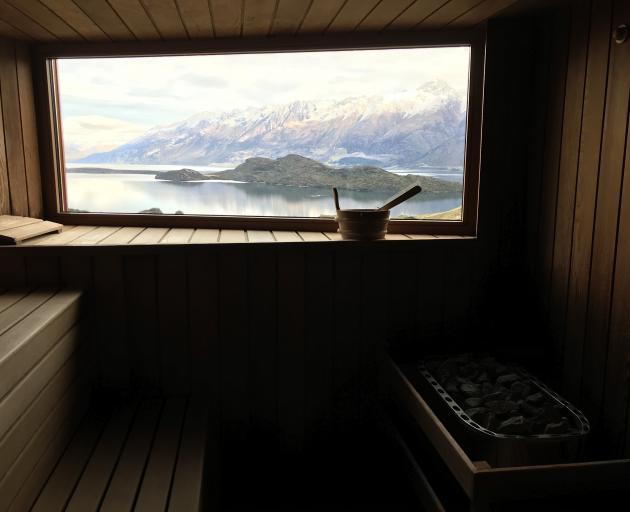 There’s nothing more scenic than a sauna with a view. PHOTO: SUPPLIED
I know I won’t be able to replicate the perfection of the retreat at home, but it’s a kick-start into healthy habits which can help balance our busy lives.

Which makes it not just a luxurious holiday to remember, but one which I’ll be appreciating for a long, long time to come. 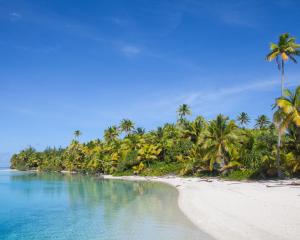 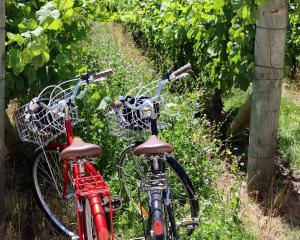 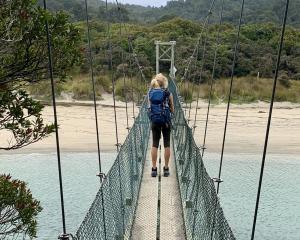 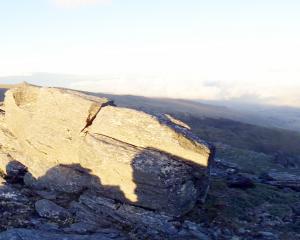