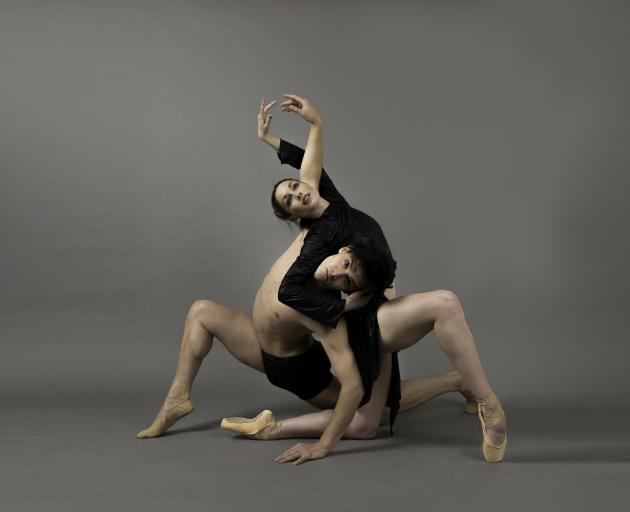 Subtle Dances, by Ballet Collective Aotearoa. PHOTO: CELIA WALMSLEY
For Otago fans of dance there is a plethora of opportunities to get your fill of contemporary movement, thanks to the Dunedin Arts Festival and the Festival of Colour. Rebecca Fox talks to the choreographers and dancers coming to a stage near you.

One name keeps popping up when you read the credits for upcoming contemporary ballet productions - Loughlan Prior.

The former Royal New Zealand Ballet soloist, now principal character artist and choreographer, has had all his productions come at once.

"Overwhelmingly. When it rains it pours. It’s like I’m doing two years in one. It’s the residual of postponed projects, plus those planned for this year, all happening at the same time. 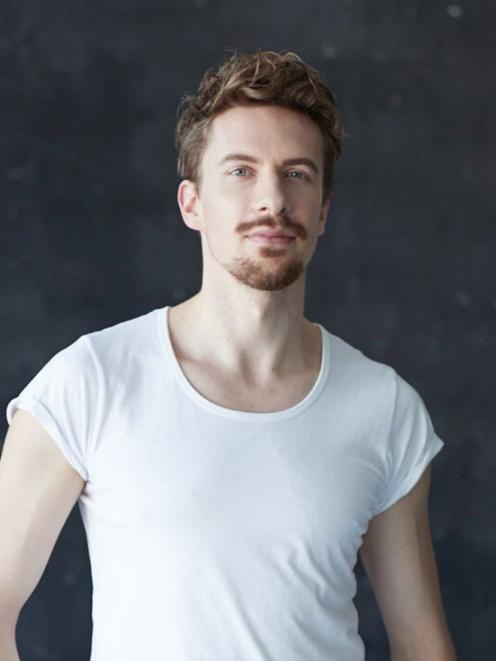 Ultra Violet was commissioned by RNZB artistic director Patricia Barker in response to an invitation from the Royal Opera House in Covent Garden to join a group of choreographers from around the world presenting short works.

"It was an amazing platform."

So Prior, together with his "artistic partner in crime", composer Claire Cowan, created a work - but the night before they hopped on a plane for London the programme was cancelled because of Covid-19.

"We had to unpack our bags and then shortly after that we went into lockdown."

Ultra Violet went on hold. But all was not lost. Barker suggested Prior expand the eight-minute work to 25 minutes and perform it for the Festival of Colour.

"It’s now a full one-act work which is awesome. That may not have ever have happened if this series of events had never occurred. It’s been really satisfying and fulfilling."

The work explores how birds and insects see at the ultraviolet end of the colour spectrum.

"It’s Claire and I stretching our compositional and choreographic muscle. This opens up a realm of movement and sound. It is exploring beyond human sight and takes us into the realm of really interesting abstract choreography.

"There is a lot of really beautiful partner work, intricate weaving , lacing and contorting of the bodies. It’s been really enjoyable creating the whole ballet with Claire’s music."

The music has been pieced together from Cowan’s back catalogue with the original piece she wrote for London.

"It all came from the music to begin with. When you hear it you can hear soaring birds and insects exploring and fossicking in the ground.

"We’re both quite visual people so then we were looking at a lot of imagery where they render images so you see the frequency birds and insects see things at.

"It’s exploring the world in a completely different way." 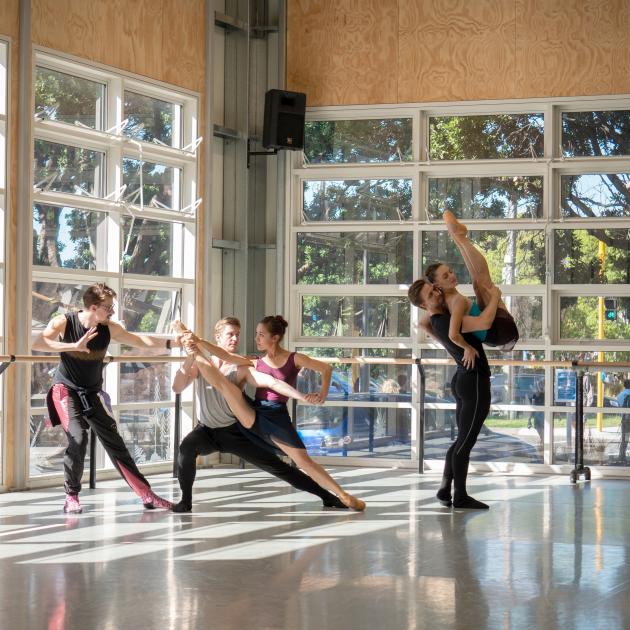 As Prior had essentially "grown up" in the RNZB, he knew the dancers he was working with and had been able to create the choreography for them.

"These are dancers I’ve watched for years. I know their strengths and have been able to create to showcase their abilities. It’s quite personal in a way."

The costumes for the work have been designed to be sleek and simple, designed in a vibrant blue to pop under the lights.

"The choreography is so dense and textured, the costuming wants to be simple and architectural to the body so you can see the intricacy of the movements. And it’s all in point shoes so that is exciting and adds that alien level to the movement."

Ultra Violet is more abstract than Prior and Cowan’s previous more narratively driven work such as their RNZB 2019 production of Hansel and Gretel. The pair decided they did not want to limit themselves so early in their careers to one genre of work and they enjoyed exploring different aspects.

"It’s quite a nice departure from that. It’s freeing the creative process, looking at the form of two bodies interacting without telling a story - you’re not a slave to ‘the breadcrumbs are dropped here’."

Prior’s other project hitting the stage in Dunedin is a piece choreographed for BalletCollective Aotearoa’s first season, Subtle Dances.

"It’s quite fun and quirky in comparison."

The company approached Prior to create a work, knowing of his relationship with Cowan who had already been commissioned by the New Zealand Trio - Amalia Hall (violin), Ashley Brown (cello) and Somi Kim (piano) - to compose a piece Subtle Dances for the joint project with BalletCollective.

"I started to create this contemporary ballet. This one is a little more narratively structured as each movement is expressing a different atmosphere or structure."

The first movement is very much based on first meetings and interactions between people.

"The reason its called Subtle Dances is because it is kind of the way, as people, we have these unwritten rituals when we meet people and the nuances and gestures and body language we employ when we are on a first date or meeting someone for the first time.

"It brings a nervous energy to it."

With a cast of eight dancers, Prior had been enjoying "riffing off the personalities" of the dancers and seeing how they connected and combined.

"Little mini relationships develop in terms of characterisation even if not visible to the audience."

The second movement was more depressive, slower, an arduous state, indicative of a breakup while the third had all the nervous energy of someone getting back "on the horse".

"Claire originally wrote this piece, like her breakup album." 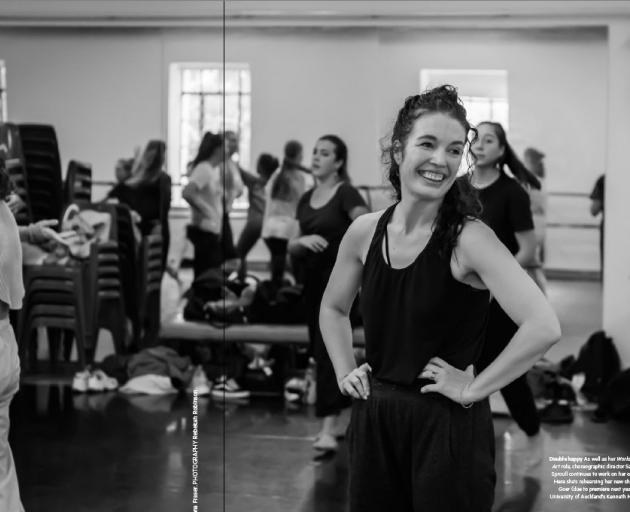 Former Dunedin dancer and now choreographer Sarah Foster-Sproull. PHOTO: REBEKAH ROBINSON
The cast of eight includes Abigail Boyle, a former RNZB principal dancer, who had been a delight to work with again, he said.

"We used to dance together. When I first joined the company I was like ‘Oh, my God it’s Abigail Boyle’. It’s really lovely to be working with her again."

Boyle, who has been teaching dance since retiring from the RNZB about two years ago and doing guest appearances, jumped at the chance to be involved in the BalletCollective and with the choreographers lined up, which not includes Prior, but also Cameron McMillan and Sarah Knox.

"I’m really enjoying the aspect of it all to bring New Zealand dance to audiences and provide more opportunities for dancers in this Covid world. The trio is going to be on stage with us so that is going to create ambience. It’s a win, win."

In Subtle , she performs in both McMillan’s and Prior’s pieces. McMillan’s piece "Helix" is about time and has references to The Odyssey.

"I love it so much. There is this feeling of being connected by not connected."

Now she had more of an education behind her, she believed she attacked class much better and smarter.

"Being able to listen to the body is very important. It feels amazing to be back in the studio, to be honest - to be sweating, working hard and collaborating. And seeing the younger dancers having a great time and watching them grow is very satisfying."

Boyle has a lot of admiration for Prior who told her when he first started at the company that he wanted to create.

"He knows me really well. He has definitely choreographed a piece that sits well on my body."

As they had started working on the piece before the pandemic, things had changed slightly but it still focused on personal relationships.

Boyle is juggling the piece with her commitments as a teacher for the New Zealand Youth Ballet Company based in Christchurch which focuses on performance and training for a professional life.

"I can’t wait to get back down there." 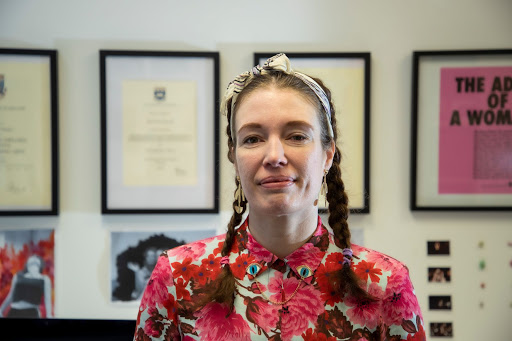 Foster-Sproull, who is a senior lecturer in dance at the University of Auckland, was commissioned by the RNZB.

"I’m looking at the life cycle and the various events that might occur in the span of someone’s life from an abstract perspective, working to capture the physical energy of those stages of life in order to have contemplation and reflection at the retirement age."

This is in synergy with the festival’s director, Philip Tremewan, retiring from his position.

"It’s connected and entangled with that."

She worked with 10 dancers in a "fast and furious fashion" early this year to pull the piece together.

It involved Foster-Sproull, RNZB’s choreographer in residence, teaching some content and then having the dancers respond.

"They might respond and develop that material on their own bodies and then we collaboratively work to develop the full-length work."

The time limits meant she worked in a more structured way than her normal instinctive process.

"I had to use my time well to attend to each of the cycles we were trying to achieve."

She had the full score, composed by her favourite composer Eden Mulholland, beforehand which also enabled a smoother process.

"It’s an extension of one of the works he did for me three or four years ago perhaps. It really goes on quite a dynamic journey."

The work has seven sections and each has quite a distinct flavour.

"We are looking at the abstract energies of the stages of your life so [in] the before-birth stage the world is full of potential and the energy of chaos."

The work is named after a section in the middle of the piece which is about exploring or coming to terms with personal relationships.

"In the autumn ball, I’m imaging the dancer steps on their abstract world to a more figurative one dancing with their lovers or friends so it’s more personal and a little more narrative in its structure."

It moves on to other sections that are more about labour and work and sections of intimacy and contemplation.

Each work she makes has a different set of circumstances.

In this one, it was using her skills in contemporary dance and marrying it with ballet as the culture of disciplines is different.

"What I love about my work is that no two pieces are the same or unfold in the same way.

This is her fourth ballet work.

The speed at which she worked was a bit confronting for some of the ballet dancers so dancers were selected to suit that, she said.

"It really suited a particular sort of dancer who was ready to throw everything into the ring."

While working on the piece, she had also been working on her PhD. That, and doing research into intellectual property in relation to choreographic practices, would be her biggest project for 2021.

"Apart from this I’m making a concerted effort not to overload myself."

Like Prior, she also had projects from the past year that would be coming out during the year, including a dance film.

"It’ll probably make me look like I’m on a hamster wheel churning out choreography."