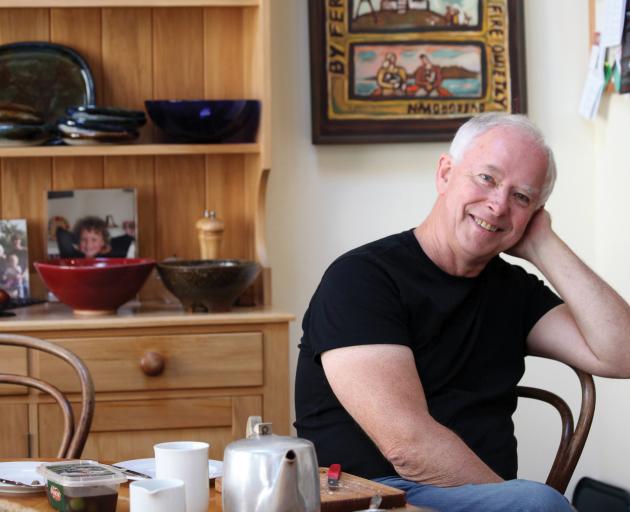 Bill Manhire presents a series of tantalising riddles with musical interpretation, in Tell Me My Name. Photo: Supplied
Make believe and mystery are wrapped in the word and song of an Arts Festival Dunedin treat.

Party game or hidden truth? Tell Me My Name is a bit of both. Presenting a celebration in song, word and riddle, celebrated New Zealand writer Bill Manhire and his ensemble will offer a unique performance at Arts Festival Dunedin, particularly for those who enjoy a puzzle.

Drawing on his 50-year career as a writer, poet, and lecturer, and a rich anthology of Anglo-Saxon poetry, Manhire has adapted riddles and crafted his own to create a theatrical experience that marries riddle and song.

"The riddle songs in the show are a bit like party games; not knowing is part of the fun," Manhire said. "We've all had that Christmas cracker experience where you pull out the paper, read the riddle and it's kind of bad; everyone groans when the answer comes up."

Manhire's riddles of choice are not so much of the groan-inducing variety, nor do they even necessarily resolve themselves without a bit of work from the listener.

The show had its premiere in April 2017 at Wanaka Festival of Colour, and since then its only evolution has been to incorporate "a bit more to-ing and fro-ing," Manhire said.

"We realised that people liked to try and guess riddles. We might hand out a little piece of folded paper with all the solutions on it."

The caveat, though, is that knowing the answers comes at the expense of the mystery.

"The riddles that I know best in terms of poetry are the ones that are in Old English," Manhire said. "In all of those riddles, an object or a creature describes itself, and it ends with `What am I?' or `Tell me my name'."

The largest remaining collection of Old English literature is contained in a 10th-century anthology known as the Codex Exoniensis or the Exeter Book. Unesco has called it one of the "world's principal cultural artifacts".

This is a show in which words get their full and proper treatment in song, and Griffin is the perfect vocalist to wield them, Manhire said.

"One of the great things about Hannah Griffin is that she has this wonderful diction, so she can sing quite complicated text and you can hear her words," he said.

"She can probably sing the telephone directory and you would adore it."

On the medium itself, Manhire suggested that many people "deny themselves the immediate, direct experience of language that poetry gives".

"Something happens in high school and people get intimidated in the classroom. Little kids don't have a problem with words and poems and nonsense. But when the teacher says `What is the theme of this poem?' we all get terrified and poetry becomes this intimidating, burdensome thing."

The poem, and certainly the riddle, were just one among many literary explorations of mystery and truth, Manhire said.

"Parables are always presented as riddles, and then it was somehow your job to work out just what it meant," he said. "I think it's very close to metaphor."

The enduring appeal of literature was the opportunity to "come to life imaginatively", whether in writing or simply enjoying the ideas of others.

"I remember being told off when I was a child, we weren't to `make things up'," he said. "It's good to make things up; it's good to invent parallel universes that give us pleasure."

Tell Me My Name will play for one night at the Savoy on Monday, September 24, and also as the first in the St Paul's at One Forsyth Barr Lunchtime Series that afternoon. Book online at www.artsfestivaldunedin.co.nz