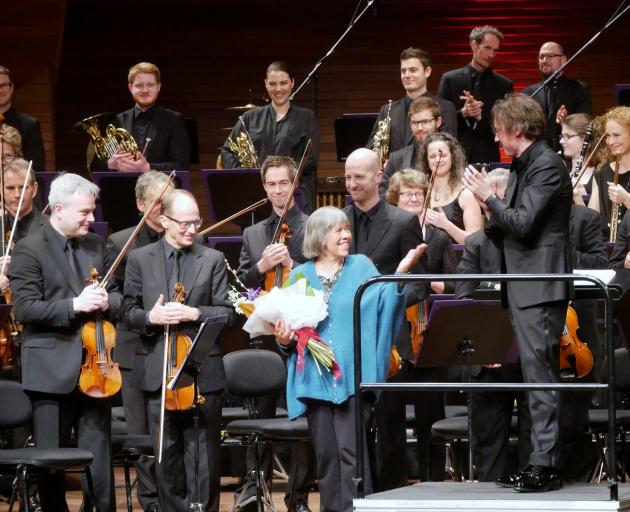 By taking a time and place in history and turning it into music, Dunedin composer Dame Gillian Whitehead hopes to paint a picture of the confusing times when Captain James Cook arrived in New Zealand.

Dame Gillian is one of four composers selected by the New Zealand Symphony Orchestra to create works to mark the 250th anniversary next year of Captain Cook's arrival in New Zealand and his meetings with Maori.

Earlier this year, the NZSO performed Tupaia, by Salina Fisher, and He iwi tahi tatou, by Gareth Farr. The fourth composer is Michael Norris.

For her work, Dame Gillian was given the theme ''landfall'', but late New Zealand composer Douglas Lilburn wrote ''Landfall in unknown seas'', so she did not want to call it landfall.

Eventually, she settled on Turanga-nui, the name of Gisborne and focused on Cook's arrival there.

She imagined Cook and his men arriving after months at sea to see this wonderful land.

History tells of Cook and his landing party coming ashore in search of water and meeting a Maori warrior.

The warrior approached, presumably issuing a challenge, which Cook and his men misunderstood fired warning shots over his head.

''Of course, it means nothing [to the warrior], it's just a noise, so the warrior keeps on coming. The coxswain shoots and kills a chief.''

Luckily, an interpreter manages to explain and there is a truce.

The following day, Maori hoped to exchange weapons, but that also ended in more people shot.

Eventually, Cook and his men return to their ship and leave. It was a day Joseph Banks described in his diary as ''the most disagreeable day of my life''.

So, while Dame Gillian's work is to celebrate Cook's arrival in New Zealand, some of the events ''are not something to celebrate''.

This made the work's composition quite a challenge, she said.

''I lived with the story for a long time and I think I over-thought it before I wrote it.'' 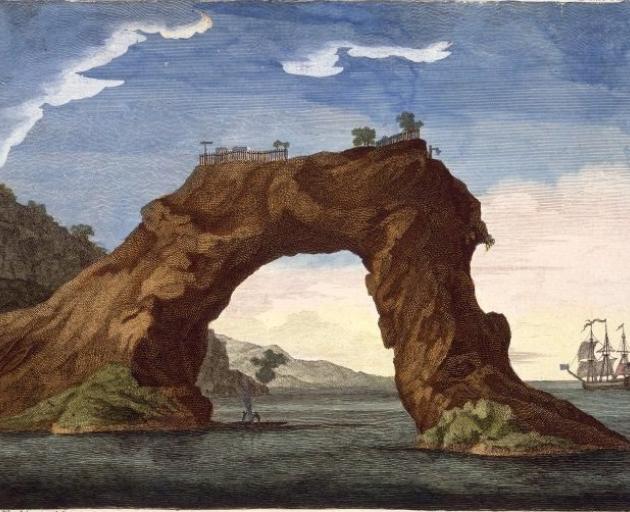 An engraving by Sydney Parkinson, 1745-1771, of the arched rock at Mercury Bay (which has since collapsed), with a small canoe beneath it and the Endeavour at anchor. The palisades and some buildings of the pa (Te Puta o te Paretauhinu) on top of the rock. Photo: Alexander Turnbull Library PUBL-0037-24
She finally sat down to write the piece in her Dunedin home last Christmas. While it is not a very long piece that is not how it started.

''My first thoughts were of quite a long piece as there was so much you can put into it. I had to keep bringing it down in scale. I think that has worked quite well really.''

When she was writing the piece she wanted to make it something the people involved in that story might understand.

''I mean not use a language to far beyond their comprehension although it would be because the idiom is so different. It was something I felt while I was writing it.''

She went back to the piece and ''tinkered'' with it.

''I was polishing the edges or something, just small details. It's an abstract piece, yet not abstract. Pictorial, if you like, but not pictorial, its somewhere in-between.

Dame Gillian wants people to interpret her composition as they want.

''I had certain things in my mind when I was writing, but I think people can pick up other things and that's fine.''

Added to that, she normally chose her own themes.

''This is the first piece I've had with a specific theme, an orchestral piece. It isn't something I would have chosen, but I've really appreciated working on it.

''It takes you into the history of that time and place. Day one after Cook's arrival [and] people are being shot.''

It is also important to remember that while New Zealand celebrated the arrival of Cook, other people had already ''arrived'' in the country.

''There were waves of Maori before that. For everyone there was the same problem: You come across a vast expanse of water and you don't know what you are going to find.

''It was true for the first people who came and people that come now. Everyone has come across that water.''

Dame Gillian says Dunedin is a good place to write.

''I've been writing there for a long time. I spend some of time down south and some of my time in the north.

''In the north, I'm still settling in and doing things to the place. In Dunedin, I've got a set up I can just go to and work.''

Dame Gillian starts a work with pen and paper and then puts it on computer.

''I've devised a way to work between the two.''

She heard the work for the first time earlier this month.

''It's like going from two dimensions to three. It was good. The players seemed to like it.''

''Whatever the next piece is, it's exciting.

Turanga-nui will be played by the New Zealand Symphony Orchestra (NZSO) as part of its Classical Hits performance, which will also feature works by Franz Schubert, Claude Debussy and Pyotr Ilyich Tchaikovsky.

Many of the works have been used in movies and television.

It is being conducted by NZSO associate conductor Hamish McKeich, who earlier this year conducted the orchestra for its sold-out and critically-acclaimed performances of Star Wars: A New Hope in the New Zealand Festival.

The guest soloist is NZSO principal cellist Andrew Joyce, who will play Tchaikovsky's Variations on a Rococo

Theme, the composer's most famous work for cello.

''Tchaikovsky's Rococo Variations is a real thrill, both to play and to listen to and I'm super-excited to be touring this piece around the country with my wonderful friends and colleagues of the NZSO,'' Joyce said.