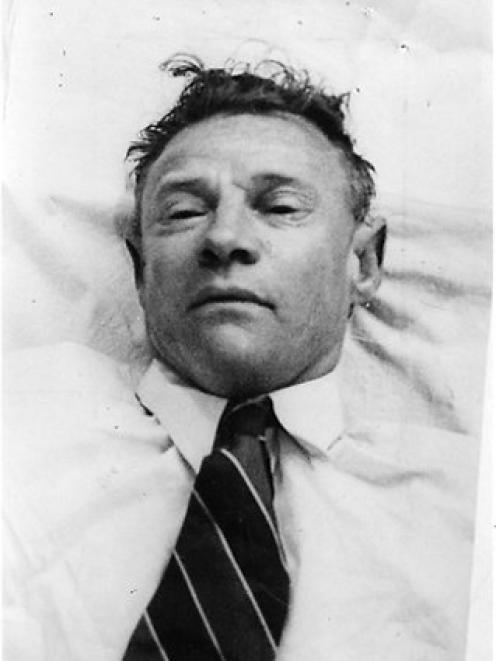 A police photo of Somerton man's corpse from 1948. Photo: Australian Police
The identity of the so-called Somerton man has been solved more than 70 years after his body was found on an Adelaide beach, a university professor says.

Derek Abbott says DNA from hairs taken from the man more than a decade ago was recently cross-checked with other samples, identifying the mystery man as Carl Webb, an engineer born in Victoria in 1905.

Using DNA submitted to worldwide databases, the University of Adelaide academic said he was able to find a distant cousin on Mr Webb's father's side and then build out his family tree.

"We've been trying to extract DNA all these years. It's a very tough problem getting it out of old hair," he told radio 5AA.

"But the technology has improved dramatically over the years."

By February this year, Prof Abbott's team had achieved enough refinement to use that DNA to find a cousin to the Somerton man.

"Our tree has 4000 people on it altogether as we built it out and there are only two people on this tree with no date of death," he said.

"What we were able to do is trace Carl Webb's maternal side down and find somebody alive today who has done one of these genealogical DNA tests and we found a match.

"We've now got subsequent other matches. We're very confident, with 99.9 per cent confidence this is the man."

Police are yet to confirm the man's identity after exhuming his remains last year in new efforts to solve the mystery.

In a statement, a spokesperson for the state coroner said the DNA work by government forensic scientists was not yet complete.

"Once that work is complete a brief will be submitted to the state coroner, who will assess whether the remains of Somerton Man may be formally identified," the statement said.

Police said they were heartened by the latest developments and were "cautiously optimistic" that this may provide a breakthrough.

Prof Abbott said he would work with police and the coroner in relation to his DNA findings so that the man's identity could be officially declared in state records.

On December 1, 1948, the man's body was found on Somerton Beach when passers-by noticed him slumped against a seawall.

His cause of death remains unknown and many theories have been advanced over his identity, ranging from a jilted lover to a Cold War spy.

An initial police investigation and coronial inquest left the matter unresolved, with the case particularly mystifying because of a number of items found with the body.

They included a suitcase, items of clothing with the tags removed, incoherent writing believed to be a code, the poetry book The Rubaiyat of Omar Khayyam and a torn scrap of paper with the Persian words "Tamam Shud", meaning it is finished.

Premier Peter Malinauskas said if the man's identity had been discovered it would a "great revelation for what has been a long-held mystery".

"Most importantly it provides a degree of dignity to the Somerton man himself," the premier said.