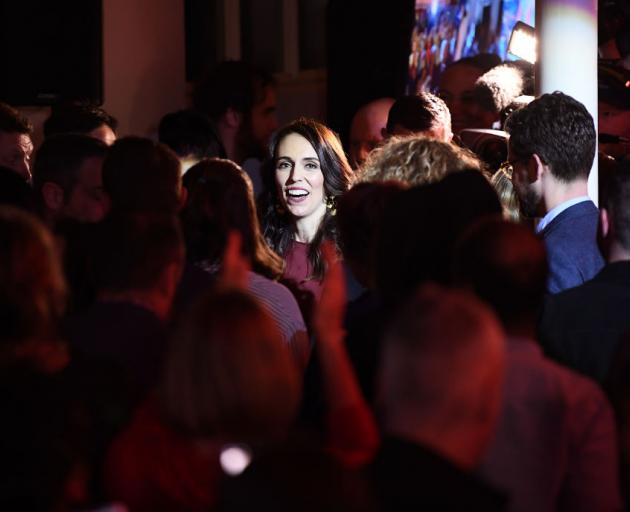 Labour Party leader and New Zealand Prime Minister Jacinda Ardern among her supporters after declaring victory. Photo: Getty Images
The idea was nice, but are we really a team of five million? Glenn Turner ponders that question.

Are we really becoming more civilised when it still takes a war or a pandemic to unite us? Have we advanced much when it takes a common enemy to emerge before we become one?

And why is there such a rush to return to a status quo of disunion? How much of a shift will it take before enough people genuinely regard community as important enough to renounce greed and entitlement?

People’s resistance to change, and the desire to return as quickly as possible to so called normal once the enemy departs, appears to be an all too common reaction. Those successful in using the system to their advantage pre-Covid, instinctively don’t wish to surrender any of their lion’s share of money and the power gained from it. The want for more is ever present whether the need exists or not.

There are some who can connect with the opportunity and timing for a reset, but their battle to succeed will be much more difficult. Their attempts to improve entrenched systems are likely to be thwarted by the values of the ruling establishment.

Perhaps some with excessive amounts of loot, might take a closer look at themselves and realise they are very poor, because all they have is money.

Those lacking empathy come up with convenient one-liners attempting to denigrate the disadvantaged: "They get what they deserve, they haven’t taken personal responsibility, and they’re lazy takers who don’t want to work, have too many kids and waste money on unnecessary extravagances."

It’s extremely damaging and preposterous to suggest that many in this category don’t want the dignity of work, improved living standards for themselves and their families, or to contribute to society. Attitudes of blame that demonise and lock people into poverty are inhumane and wrong. In the long run it comes back to bite everyone not least our reputation as a civilised country. To condone this course of action is tantamount to going down the path of bedding in a class of Dalits (untouchables).

Suggesting that equal opportunity exists and you get what you deserve, is further abuse. There will always be some who exploit a system, not least the well-heeled.

Are we to believe that all

the advantaged people are

more virtuous, hardworking and therefore more deserving of their situation? Luck may

have been the main reason for their money, having been

tance money may have automatically provided some with more than enough of the essentials and luxuries.

This group seems to be free from the same criticisms and scrutiny applied to the disadvantaged. Incidentally, the biggest polluters are the moneyed, therefore contributing more to climate breakdown and environmental collapse.

To abandon sound humanitarian policies for any grouping of people is a damaging response.

The freedoms of expression and rule of law in New Zealand may be the envy of many countries, but there is much more to do.

We are a comparatively liberal society with the freedom for all citizens to practise their native language, religion, dress and in general an acceptance of a variety of practised customs. These freedoms and acceptance of difference, set the stage for genuine unity.

The main culprit for disunity is more to do with groups being untenably disadvantaged and unprotected from the grip of poverty. There will always be a fiscal gap between people, but surely not a chasm that strips them of their dignity and general wellbeing.

Is it not time to lock in our priorities where the new normal reflects an economy serving society not society serving the economy?

Is it not time to lock in policies that automatically support all citizens’ access to the essentials of food, shelter, medical services, education and a liveable wage?

These policies would inevitably help everyone, not least those who need it most. It would reject stigmatism attached to some people and cynicism to others by moderating allegations of the so called deserving and undeserving.

Confronting and combating discrimination and poverty is an ethical duty for whichever government is ruling. To be seriously considered a team of 5million, the term "our people" must include all of us.

'Not Society serving the economy'. Thank you. Working within the economy. The economy is not the purpose of Society.