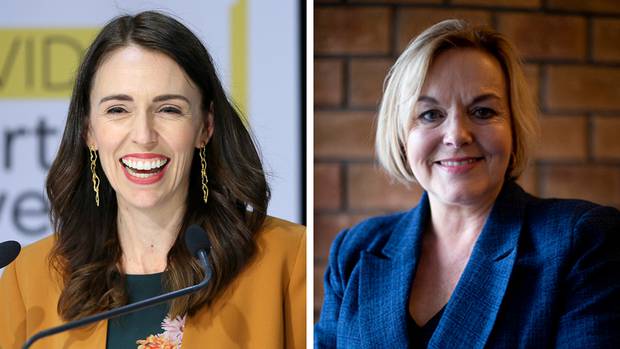 It will be the first time during the election campaign that Labour leader Jacinda Ardern will go up against National leader Judith Collins.

The pair have sparred a number of times in the House – but tonight is the first leaders' debate of the campaign season.

It comes after a 1News Colmar Brunton poll tonight showed Labour would be able to govern alone.

But the party has dropped five points to 48 percent since July.

As preferred PM, Ardern was on 54 percent - holding her high popularity from earlier this year. Collins had dropped slightly from 20 to 18 percent.

"We will see the leader of the Opposition tonight play a bit of bingo and you will probably hear that word 'KiwiBuild' frequently," Ardern said.

"If that's her one attack, I'm happy to take it because I'm proud of our record."

Ardern said she was proud of her Government's record on housing.

Speaking to the Herald ahead of the debate, Collins was already on the offensive over that policy.

"KiwiBuild is just one broken promise the Labour leader needs to answer for," she said.

But the main point of debate tonight is likely to be Covid-19, the Government's response and what changes National would make.

"I suspect the Labour leader will want to talk a lot about Covid-19, conveniently forgetting the lack of delivery her Government was responsible for on transport, housing, child poverty, economic growth, the environment and so many other things over the past three years," Collins said.

The National leader managed to get one last dig in before tonight's debate.

"Tonight, I'll be reminding Ms Ardern that traffic over the Auckland Harbour Bridge is currently moving faster than her plans to move the country forward."