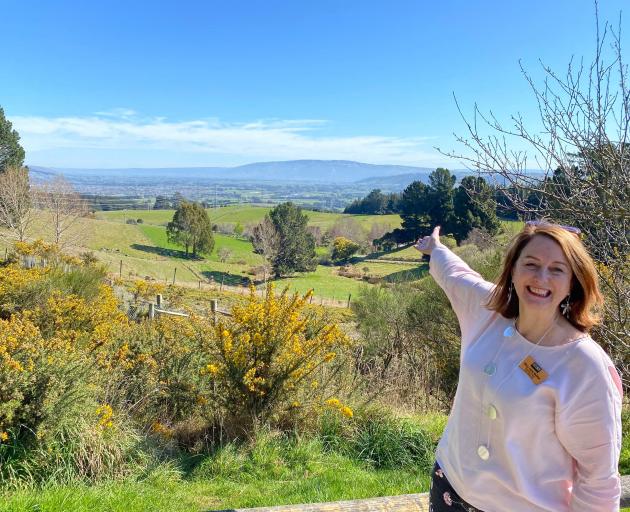 Electoral Commission Taieri Electorate returning officer Mary-Jane Moffat, pictured at the Taieri Lookout on Three Mile Hill, is flanked by the Taieri Plain, which forms a large chunk of the re-shaped electorate. PHOTO: BRENDA HARWOOD
Dunedin’s electoral boundaries have undergone major changes this year, so know your electorate and know your candidates.

That’s the message from Taieri Electorate returning officer Mary-Jane Moffat ahead of next month’s general election.

"Talking to people, it is clear that some people have no idea what electorate they are actually in," Ms Moffat said.

"And it is important to know, so you can find out about your local candidates and make an informed decision."

Created by the independent Representation Commission by re-naming the Dunedin South electorate and expanding its borders, the Taieri electorate is in its "second incarnation", Ms Moffat said.

Stretching from Andersons Bay Rd in South Dunedin to Balclutha, and inland to Middlemarch, the Taieri electorate has about 65,000 eligible voters.

"The Dunedin South and Dunedin North electorates have been stable since 1996, so this is quite a significant change," she said.

"There is also more of a rural-urban mix than before."

Having gained rural towns such as Milton and Lawrence, along with Mosgiel, all of the Taieri Plain, and the coastal area to Brighton, the Taieri electorate also covered a very wide area, Ms Moffat said.

With the general election being held under Covid-19 Alert Level 2 guidelines, regardless of the country’s alert level, everything would "look a little different" for voters.

"So, the message of vote local and vote early is more important than ever," she said.

At voting spaces, trained staff would be on hand to guide voters through Covid-19 sign-in procedures and physical distancing requirements.

Voters were being encouraged to bring their own pen along with them, or would be provided with a pen they could take away.

People who struggled to get to polling places could register for a postal vote, and there would be voter support available.

"We make it work — every vote counts," Ms Moffat said.