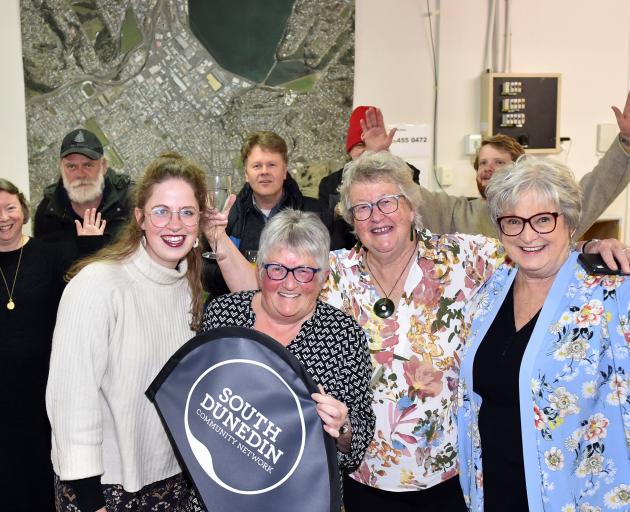 Celebrating South Dunedin joining a community development programme are front row, from left Grace Hannah, Chris Kinraid, Eleanor Doig and Lois Scott. The South Dunedin Community Network has signed up for a five-year partnership with the Department of Internal Affairs and network chairwoman Eleanor Doig is eager to know what the community wants to do to enhance its wellbeing. PHOTO: CHRISTINE O’CONNOR
The people of South Dunedin and Bruce, Milton, will be asked to ponder possibilities for their communities and get involved in making them happen.

Community networks in both areas have signed up for a five-year programme supported by the Department of Internal Affairs and they can pitch for funding from a $4 million pool to support projects.

‘‘It’s an exciting opportunity for this community,’’ she said.

‘‘We are proud to be South Dunedin.’’

The low-lying suburb’s challenges include adapting to climate change and having sufficient social or cultural infrastructure for about 10,000 people who live there.

Ms Doig said possibilities included a playground development, an exercise area and initiatives enabling adaptation to climate change and she was eager to get people’s thoughts.

Project community development manager Kim Schiller said being part of the programme would help the community to push ahead.

Projects in the pipeline could include activities for youth and elderly people and more resources could be put into arts and beautification projects, Mrs Schiller said.

The other networks selected to join the programme in the latest round were Riverside Mt Wellington, Auckland, and Te Puke/Maketu.

Department of Internal Affairs community advisory services manager Leonie Matoe said the communities selected would have access to advisory support and funding to help them achieve their goals and aspirations.

A panel that considered which communities should be included weighed up factors such as meaningful connection within the community, Te Tiriti o Waitangi and mana whenua engagement, strong local vision and strong local leadership, she said.

Taieri MP Ingrid Leary said she was delighted by the inclusion of southern communities in the programme.

Ms Leary, a South Dunedin resident, said joining the programme would enable residents to have more influence over decisions that affected their future.