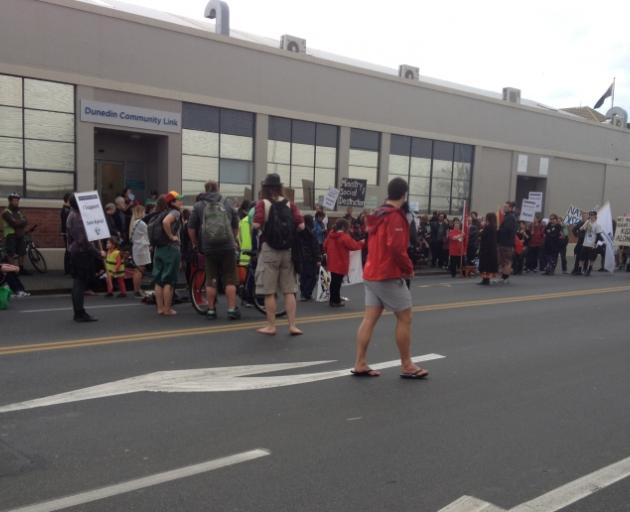 About 150 people gathered outside Work and Income in Dunedin to protest proposed welfare reforms. Photo by Craig Baxter.
Dunedin's unemployed and workers united in their opposition of proposed benefit reforms during a protest through Dunedin streets this afternoon.

Police diverted traffic around the mob as people spilled on to the road, chanting "National scum" and calling for the minister to resign.
Many spoke of their struggle to find work, provide basic food and clothing for their children and pay rent.

At 1.45pm protesters marched up St Andrew St and along Great King St and Moray Pl before turning down lower Stuart St to the Railway Station, where they gathered for a barbecue picnic.

The protest coincided with those throughout the country for the National Day of Action Against Welfare Reforms.

"These are grass roots protest actions, organised by and for the people likely to be affected by these reforms," Kay Brereton, of the Beneficiary Advocacy Federation of New Zealand, said ahead of the protests.

"People have chosen this a day to peacefully protest against reforms they see as punitive."