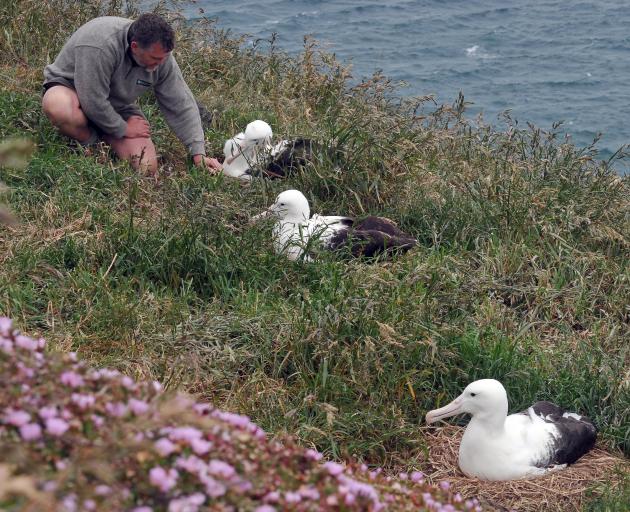 Thirty-seven toroa eggs had been laid in the past three weeks and of the 30 to be candled (checked by candlelight), 27 were fertile, Mr Perriman said.

If all 27 chicks survived risks posed by fly strike, high temperatures and winter cold to fledge next September the number would be on par with the record 27 chicks to fledge at the colony in 2003.

However, any real impact on the albatross population would be delayed, he said.

''Out of the 27, we saw roughly 18 come back. Sixteen became breeding birds but by the time those 16 were breeding 12 of their parents had died of old age.''

This meant the albatross population only increased by 1-2 pairs each season.

One of two female to female pairs were among the expectant parents at the colony this season, he said.

There had been fertile eggs from one of the female to female pairs for the past three seasons, meaning ''someone'' had been visiting.

The female pair were ''just as successful'' at raising their chicks as the male and female pairs, he said.

Chicks were likely to start hatching in mid January and the first feed, take-off attempts and day-to-day life of the offspring of albatross blue-black and red-blue-black would be live-streamed on the Royal cam.

If the chick survived, it was likely a public naming competition, such as that for last season's chick, Moana, would be held, Mr Perriman said.

Last week an adult albatross was found dead on the beach below the colony's cliff face.

He believed the bird may have clipped the cliff and suffered a badly broken wing.

While the death was a loss for the fragile population, it was non-natural threats such as introduced predators which posed the greatest risk, he said.

The remaining seven eggs would be candled to look for signs of fertility next week.