$6.7m school rebuild ‘a game-changer for us’

One of Dunedin’s oldest schools will be rebuilt at a cost of $6.7 million as part of the Government’s bid to modernise New Zealand’s school infrastructure.

For Kaikorai School principal Simon Clarke, it was news he had been awaiting for the past six years.

"It’s a game-changer for us.‘‘We’ve been working on this for six years."

A new school would be built on a clear space on school grounds, before the existing  school was demolished, he said.

"This is the best scenario for us because it means the kids can stay in their current classrooms while the new school is being built."

The development would  affect only one class, which would be absorbed into other classes during construction. 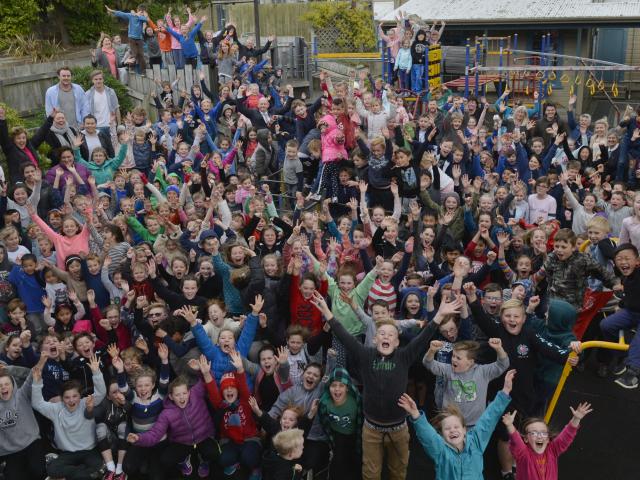 Kaikorai Primary School pupils and staff celebrate news the school will be rebuilt after receiving $6.7million from the Government. Photo: Gerard O'Brien.

"Kaikorai Primary School is a high-performing school and the modern and innovative new learning spaces it will receive will enable it to continue to inspire the best from its pupils, both now and in the future," Ms Kaye said.

"This is a great opportunity for the school and its community to develop an environment that will support their vision for teaching and learning."

Mr MacIndoe said the school had a long and proud history as one of Dunedin’s oldest schools, having been established in 1869.

The redevelopment would result in the demolition of several old buildings that were near the end of their useful life.Eight new classrooms would be built as part of the project, along with a new library, administration area and multipurpose hall, Mr MacIndoe said.

"Kaikorai Primary School will work with the Ministry of Education over the next two years to develop plans for the new facilities," he said.

Mr Clarke said it was hoped the new classrooms, library, administration area and multipurpose hall would be built near the sports field on the corner of Tyne St and Stuart St.

The end result would be pupils would have much more flat area to play on, he said.

"Part of the overall brief of the project is to use the space that we’ve got more effectively."