The Southern District Health Board area still has the most Covid-19 cases per head of population in the country.

The number of cases in the area is 70, as at Sunday afternoon, second behind the Auckland DHB's 75.

However, the SDHB area covers a significantly lower population.

The SDHB is based in Dunedin, and covers the bottom of the South Island, including Fiordland, Queenstown, Oamaru and Invercargill, with a total population of over 329,000 people.

Details (current to Sunday morning) released by Southern Health show there are 24 cases in Dunedin and 22 in Queenstown Lakes. 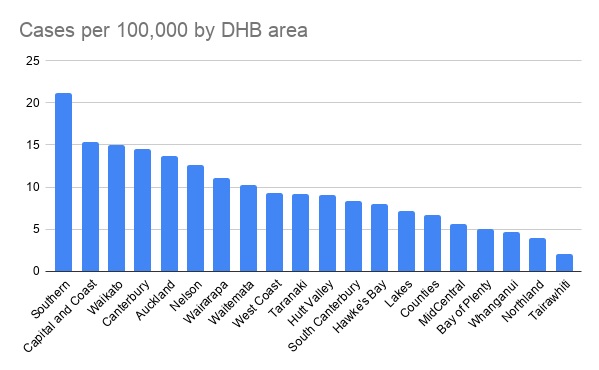 Data from Ministry of Health.

The number of cases continues to rise around the country - 63 new cases were announced today, along with the country's first death linked to coronavirus.

The victim was a woman in her 70s in Greymouth Hospital early this morning.

Prime Minister Jacinda Ardern said the death was "devastating news", but it was a reflection as to why New Zealand is in self-isolation.