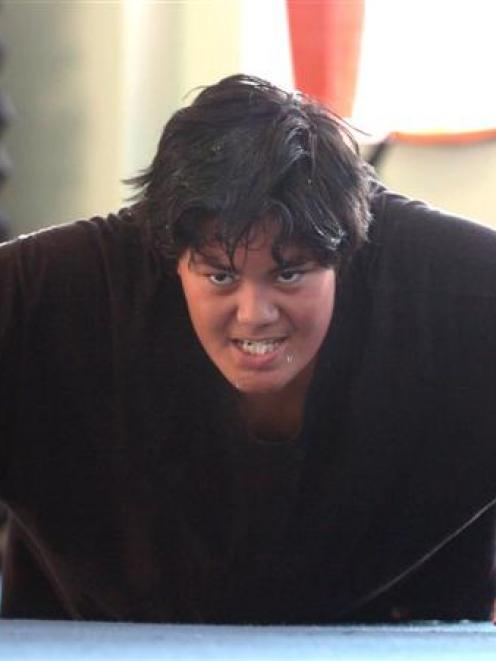 Alarm bells rang when the 13-year-old said he thought he was going to die doing simple activities.

Tavita's deteriorating health was noted during a parent-teacher interview and, given his mother died of a heart attack five years ago, his father Tony Mamea decided to enrol Tavita in a new youth fitness programme.

"I was worried about Tavita.

''He was overweight and I didn't want him to meet the same fate as his mum," said Mr Mamea, who took his son to the class for 10- to 13-year-olds at Creative Conditioning in Dunedin.

Since then, Tavita has lost 5kg and 8% of his body fat.

While Tavita is chipping away at his percentage, Mr Mamea has become a member of the gym and is attending adult classes to support Tavita and improve his own health.

Creative Conditioning director Gary Dawkins said the youth programme was established because of a growing number of children growing up on a couch in front of the television set while living on poor diets.

"We've turned our attention to younger kids to get them into a healthier lifestyle.

''We're concerned about the growing number of young people with body fat levels up into the 40% [range].

"When I walk up the street, I see one in four kids who are in that range.

''Our aim is to get kids into the habit of doing exercise for themselves."

As well as interactive one-on-one body-weight exercises, kick boxing and circuit drills, members were given recipes to help change their diet, he said.

"It's a holistic approach.

''We have goal-setting and the overall aim is to make it fun so they enjoy it for the rest of their lives."

Mr Dawkins said he was putting 11 young people through the programme and hoped they would inspire others their age to get more exercise and eat properly.

Tavita said the programme was "awesome" and he was really starting to notice a difference in his fitness levels.

"At first, it was really hard.

''I was really tired.