Fire and Emergency New Zealand crews from Dunedin Central, St Kilda and Willowbank stations outside the Dunedin Central station at 6am yesterday. Photo: Christine O'Connor
Dunedin families stood together in spirit, but apart in distance, at dawn on Anzac Day - not forgetting those who served the country.

Along many city streets, families and individuals were seen walking onto their front lawns and listening to a radio broadcast of The Last Post.

The cenotaph in Queens Garden stood alone, as the Covid-19 pandemic saw Anzac Day services across the country cancelled, for the first time in history.

But people of all ages commemorated from their lockdown bubbles, taking part in the Stand at Dawn service, organised by the RSA and NZ Defence Association.

Crew from New Zealand Fire and Emergency also held their own service.

About 15 members stood outside Dunedin’s Central Station at 6am, with the doors open and the fire engines behind them. 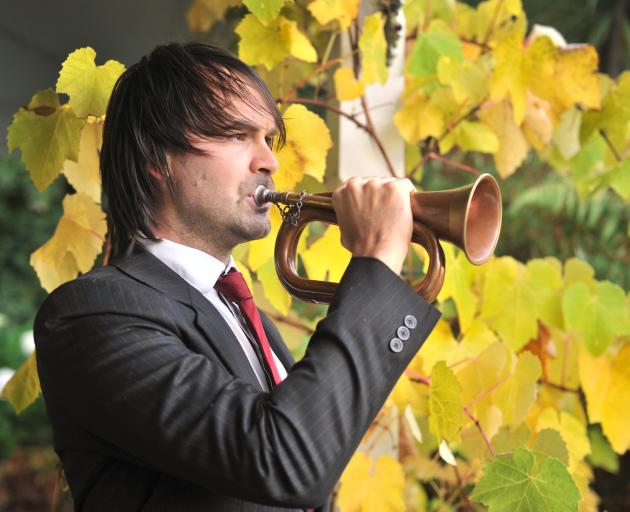 Tosh Stewart plays the Last Post on the bugle from his home in Carey's Bay on Anzac Day morning. Photo: Christine O'Connor

He said it had been an important day for them to mark and many people may not have been aware that those who established Dunedin’s Central Station, in the late 1800’s, had army involvement.

It even drew a small crowd of people, who were all a part of the same bubble.

Residents of Te Rangi Hiroa College watched from the other side of Castle St.

College head Rosemary Tarbotton said they had planned to stand outside their college at dawn but when they saw the crew outside the fire station, they decided to wander down in their bubble.

Outside the city’s centre, children, teenagers, adults, and veterans and non-veterans, emerged from their homes for a moment of reflection.

And musicians took to their balconies and driveways, echoing the sound of the burgle through suburban streets.

Wendy Ross, of Mosgiel, along with her husband and children, were one family who commemorated from their front lawn.

Their fence had been decorated with old records which they had melted, painted and shaped into poppies.

Anzac Day had always been a day where they celebrated their family’s grandparents who were in World War II, with one of them being a prisoner of war.

“The family usually get together to reminisce about their lives.

“In 2014 I went to Anzac cove and that gave me a deeper appreciation of what our soldiers went through for us, and what some of them are still doing.”

Dunedin RSA president Lox Kellas said he had been thankful to those who took the time to pause and reflect.

“It is something simple for a significant day”.

He said he listened to his neighbour play The Last Post on the bugle from his own home, at dawn.

And he hoped people would adopt the new idea of putting poppies on their front gate or letterbox and continue doing it in the years to come.