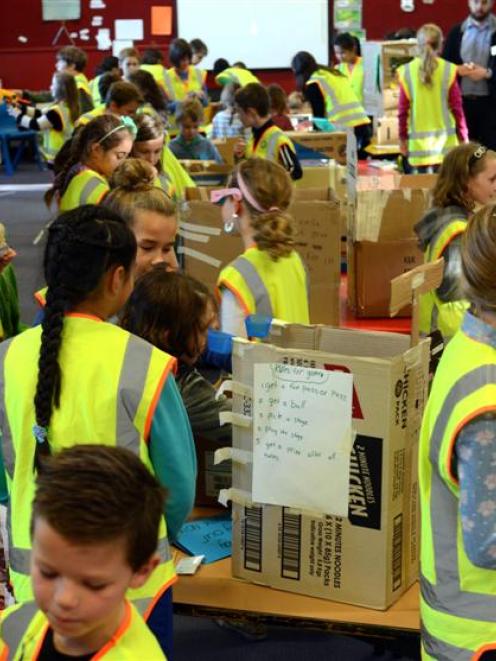 Year 4, 5 and 6 pupils at Opoho School take part in the cardboard arcade challenge on Friday. Photo by Peter McIntosh.
What do a ''torture chamber'', pinball machine, air hockey, and a pool table have in common?

They are all arcade games.

Actually, the ''torture chamber'' may not quite be the most traditional arcade game.

In Opoho School's case they were all arcade games made from cardboard by pupils in a re creation of an online video that went viral - 'Caine's Arcade''.

Year 4 and 5 teacher Mel Beckett had the idea and was amazed at the variety of games that pupils had devised.

''They have shown amazing creativity.

''It puts mathematics into practice and also working together to create something unique.''

The whole school was in on the arcade game action amid chaotic scenes on Friday.

The ''torture chamber'' game was less harsh or cruel than it might perhaps sound from its title. It involved a blindfold and putting your hand into the unknown and trying to identify an object.

Year 6 pupil Yannick Medevcky helped design the ''disc challenge'', where the aim was to flick a CD into a narrow cardboard slot.

Ms Beckett said each pupil received 10 tokens and had to use them wisely, to hold on to them or gain tokens, similar to the ''real arcade world''.

The year 4 and 5 pupils were in charge of marketing for the event, creating posters and flyers to go with the games.

Horse and rider hit by car in Mosgiel