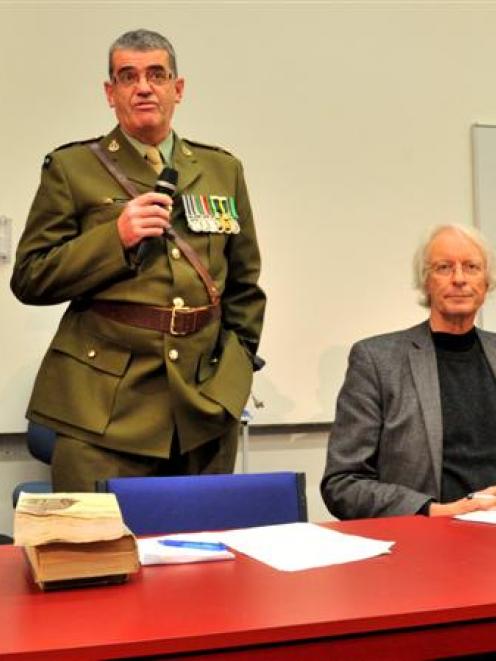 Prof Jackson said myths were created and perpetuated, while some people's voices and experiences were silenced. The forum was organised by the National Centre for Peace and Conflict Studies, of which Prof Jackson is deputy director. Myths used to legitimise war included the idea that every soldier who died was a hero and their sacrifice was voluntary. In the case of World War 1, they died for ''empire''.

''They were sacrificed by other people,'' he said.

The effect was to ''de-politicise'' war, erase memories of its horror and exonerate those who might be held accountable.

He would like the focus of remembrance ceremonies widened to include animal and civilian victims, women and conscientious objectors.

He noted promising signs that war remembrance was becoming more ''truthful'', including the wearing of white and purple (to remember animals) poppies as well as red.

Christian churches played a role in legitimising war - although there was also a peaceful tradition, he said. Muslims were criticised for imbuing their faith with military themes, while those in Christian countries tended to forget their own churches did the same, Prof Jackson said.

War remembrance involved a person's spirituality and sense of identity, and expressed differences between nations. Australians were more likely to celebrate Anzac Day than New Zealanders, he suggested.

Northern Irishman Associate Prof David McBride, of the preventive and social medicine department, said New Zealanders were not ''wedded'' to militarism, but had a proud military history all the same. Prof McBride, a former reserve constable in the Royal Ulster Constabulary, said violent conflict caused a great deal of ''human misery'' and should be avoided.

He is also a member of the New Zealand Army Territorial Force.