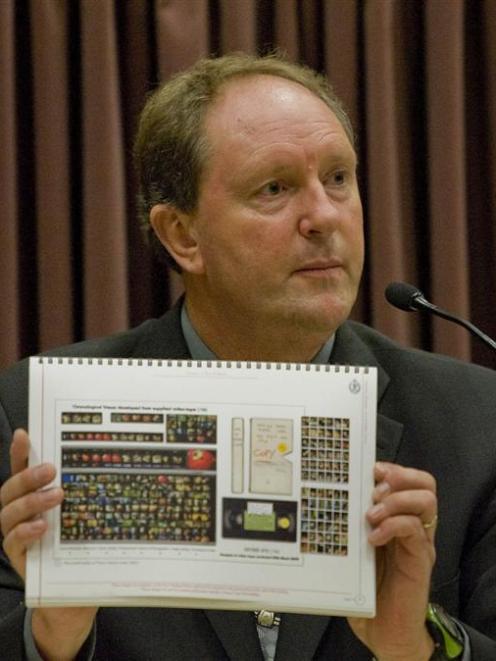 Simon Schollum, who has a 32-year career in law enforcement, was called by the Crown as an expert to clarify the issue of a spectacle lens found in 14-year-old Stephen's bedroom after his death on June 20, 1994.

The Crown says the lens came from a pair of glasses worn by David Bain when he shot his younger brother, following a violent struggle on the day four other members of the family were also shot.

But the defence says the lens, found under articles in the bedroom, was put there by former detective sergeant Milton Weir, one of the officers involved in the inch-by-inch search of the bedroom.

Mr Schollum told Crown counsel Robin Bates he was aware of the suggestion there had been some interference because an area near where the lens was found showed as dark in some photographs and light in others.

Over about six weeks from March 26 to last weekend, he had examined the more than 800 original negatives from the Every St crime scenes and had reviewed the entire video footage of the scene.

In all the sequence of the video recording, the scene remained largely unchanged.

Correlating the information from the video with details from the separate negatives and strips, Mr Schollum said he was able to put the pictures taken in Stephen's bedroom into their correct chronological sequence.

The photographs the defence claimed supported their contention were not in the correct sequence and differences in the way the particular area appeared, whether it showed as black or white, were a result of the way the photographer had lit the scene and the angle of the flash light to the camera lens.

His conclusion as to existence of a black area in some of the photographs was it was a product of the lighting, not a result of any disruption of the scene.

In answer to Justice Graham Panckhurst, Mr Schollum said he based that on several factors.

But he said that when the whole record was viewed in great detail, the defence allegation was "unsustainable".

A jacket the defence had referred to as evidence of movement, was "largely unaffected".

Even with Stephen's body having been removed and a police evidence arrow having been placed on the jacket, it was still largely unchanged.

In answer to Michael Reed QC, Mr Schollum said he had used modern techniques in his examination of the images.

He had concluded that what Mr Weir described to the 1995 trial jury as a lens, seen a few inches from where the incriminating lens was later found, and which was dismissed by both Crown and defence in this trial as "a specular effect" or an optical illusion, was in fact the lens from the glasses allegedly worn by David Bain during the murders.

It was visible all along and could be seen in the photos taken on the day.

Mr Schollum said he based his conclusion on images taken while Stephen's body was still in the room.

He could see the lens before the body was removed and it was clear to him the removal of the body had caused movement of some items, including the lens, which was moved a very small distance, "three to four inches", from "where I believe it was visible to where it was found"

The Crown, represented by Kieran Raftery, Cameron Mander and Robin Bates, contends David Bain murdered the family, using his early morning paper round as an alibi, and made it look as if Robin Bain shot them before committing suicide.

But the defence, represented by Michael Reed QC, Helen Cull QC, Paul Morten and Matthew Karam, argues Robin was the killer, and turned the gun on himself because he was about to be exposed for an incestuous relationship with his younger daughter Laniet.

The Crown case was completed yesterday, with the defence case to start tomorrow or Monday.