Bain: Witness says marks could be from teeth 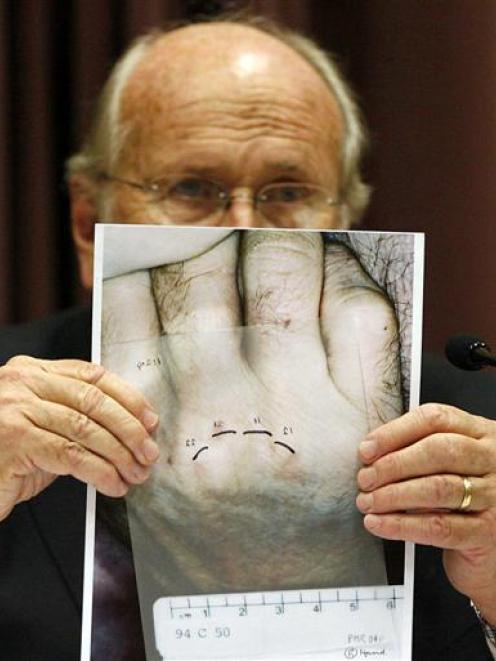 Donald Adams of Wellington was giving evidence in the High Court in Christchurch about the possible significance of four abrasions to the knuckle area at the base of Robin's right hand middle and fourth fingers.

The jury in the retrial of 37-year-old Bain for the murder of his parents, two sisters and younger brother, earlier heard about a violent struggle between 14-year-old Stephen Bain and his killer the morning five of the family were shot.

The jury also heard that Stephen's older brother David had unexplained head injuries and scratch marks to his chest when he was arrested and charged a few days after the June 20, 1994 killings

According to the Crown, Bain received his injuries in the struggle with his younger brother.

But the defence says Robin, not David was the killer.

And the defence contends several small marks on Robin's right hand could have been caused by a blow to Stephen's teeth during the fierce fight between the youth and his father.

If Robin Bain's hand had been rotated outwards and struck another individual - "as with an uppercut", Mr Adams said it would have been possible for the four marks to have been caused by contact with Stephen's teeth.

And the teeth could skid against the knuckles.

"So, for those reasons, I believe the marks could have been caused by teeth," Mr Adams said.

He reached his conclusion after making a mold of the upper jaw of a randomly selected teenager and overlaying a template of that on the photograph of the marks to Robin Bain's knuckles.

It matched "with reasonable accuracy" the four bruise marks he saw, Mr Adams told the jury.

And while it did not prove that was how the marks were made, it showed it was possible, he told defence counsel, Helen Cull QC.

Mr Adams said he had also been asked to look at the possible presence of a fine fabric glove when the marks occurred and concluded the marks were "consistent with trauma caused by contact with teeth.

But under cross-examination by Crown counsel Robin Bates, the witness agreed the marks could possibly have been made "by many other things in everyday life".

And he agreed one of the fundamental problems and an area of debate on the topic was the potential of the skin to move, that there were "real issues" about the reliability of skin as a registration material for bite marks.

He was not told Robin Bain had been fixing spouting the weekend before his death, Mr Adams said.

But he rejected a suggestion he had not been impartial in the way he considered the matter.

He had not started with any particular assumption, the witness said and had not ruled out that the marks could have been caused by something else.

"I have no idea what caused the marks," he told Mr Bates.

And that applied to the marks being made through a glove, he said.

He had not assumed "from the beginning" that the marks were teeth marks, Mr Adams told Ms Cull.

Another Wellington specialist, consultant urologist Grant Russell was asked to consider the significance of Robin Bain having 400ml of urine in his bladder when he was shot.

The Crown says that meant it was unlikely Robin could be the murderer, given the lengthy struggle with Stephen and the time he would have spent cleaning up, that he would have needed to go to the toilet.

But Mr Russell said an ageing male was likely to have a slightly enlarged prostate gland which would cause some obstruction of the bladder opening, inhibiting the squeezing out of urine and increasing its retention in the bladder.

To Mr Bates, the witness agreed 400ml could be the normal overnight collection of urine in a man's bladder.

And while a man would normally want to empty his bladder when he got up, that desire could decrease with age.

Mr Russell agreed it would not necessarily be normal to wait for an hour or two before going to the toilet, but it could be normal for a man of Robin Bain's age to get the paper, perhaps say a quick prayer, then go downstairs to cook breakfast and, if the toilet was in the downstairs area, go to the toilet then.

That could be normal "as could a lot of other scenarios", Mr Russell said.

> The trial of David Cullen Bain (37) continued at the High Court in Christchurch yesterday.

> Bain denies murdering his father and mother, Robin and Margaret Bain, sisters Arawa and Laniet and younger brother Stephen at the family home in Every St, Dunedin, on June 20, 1994.

> The Crown, represented by Kieran Raftery, Cameron Mander and Robin Bates contends Bain murdered the family, using his early morning paper round as an alibi and made it look like Robin shot them before committing suicide.

> But the defence, represented by Michael Reed QC, Helen Cull QC, Paul Morten and Matthew Karam, argues Robin was the killer and turned the gun on himself because he was about to be exposed for an incestuous relationship with his younger daughter Laniet.

> The trial, before Justice Panckhurst and a jury of seven men and five women, began on March 2. The Crown closed its case on May 6 and the defence began its case on May 8.