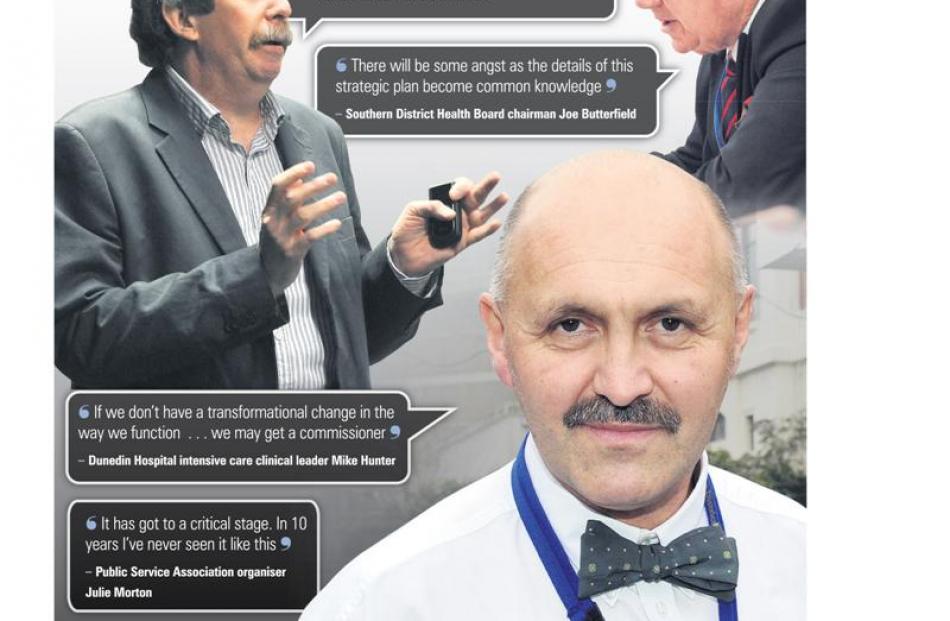 The troubled Southern District Health Board is reaching crisis point. Health reporter Eileen Goodwin examines its challenges ahead of the announcement on Monday of the new health minister.

The sense of drift and dysfunction at the Southern District Health Board, and tension between senior doctors and senior management, is expected to be addressed once a new health minister has been appointed.

Whoever gets the big job when it is announced on Monday, a significant shake-up is in the pipeline for southern health services.

This month, a document will be released proposing an overhaul of services across Otago and Southland.

Timaru-based chairman Joe Butterfield admitted in an interview the proposals would cause ''angst in some quarters''.

A high-level view that southern specialists overtreat and are inefficient means hostility and bad feeling could worsen before things improve.

A persistent rumour the Government could replace the board with a commissioner is unlikely to have substance, the Otago Daily Times understands, because board governance and senior management are firmly onside with Wellington bureaucratic and political edicts.

Mr Butterfield is keen to present the changes as modernisation, but is not shying away from their purpose - removing the deficit.

''As long as we're running deficits we're taking money from other health boards in the country.

''There will be some angst as the details of this strategic plan become common knowledge and people realise what's involved, but we've got to work through that and try to get a good result.''

Upsetting the South - which successfully defended itself against losing neurosurgery in 2010 - is understood to be viewed with genuine wariness by the Government, and it is no accident change will happen after the general election.

Ham-fisted efforts to cut costs in recent years have harmed relationships with staff and the community, and it is hoped the strategic plan will lend legitimacy by making the case for regional overhaul.

The prospect of a rebuilt Dunedin Hospital - which will not be advanced until the board's finances improve - will be touted as the payoff.

Mike Hunter, Dunedin Hospital intensive care clinical leader, was reluctant to risk inflaming the situation by speaking, but feels a ''dose of reality'' is needed.

He wants the health board to be given approval to build the new hospital in Dunedin, which would fix many of the problems with efficiency.

''There's a hopeful waiting, I think is what's happening at the moment. Hoping that they will see the reality that we can't go on working in a substandard facility, and be expected to up our game.''

However, it's essential the organisation makes a big effort to get its own house in order first, he says.

He is taking a leadership role, outside the formal structure of the health board, as a ''champion for quality improvement''.

Asked under what auspices he had stepped up, he said wryly: ''None ... desperation''.

Asked if the board was in crisis: ''It seems to be looming. It's a bit like the rumblings from a volcano at the moment.

''All this stuff last week and the week before is symptomatic of a lot of unhappiness. A lot of bubbling and fomenting,'' Mr Hunter said.

He was referring in part to the resignation of Dunedin orthopaedic clinical leader Associate Prof David Gwynne-Jones, one of several clinicians to relinquish leadership duties recently.

''There are all sorts of rights and wrongs on both sides there. But if you step back from that you see that things are not functioning particularly well. There isn't a common agenda and that's a real problem.

He's developing a new system for managing medical and management relations, and admires how previously frosty relationships have been turned around in other health boards.

''If we don't have a transformational change in the way we function, which may require many of the current people moving on ... we may get a commissioner, and that may be a hell of a lot less palatable than making some of the hard changes ourselves.''

The ODT asked Prof Gwynne-Jones for an interview, but was declined by a staff member, who said: ''Unfortunately, as a SDHB employee, he is unable to comment without going through numerous channels''.

In an email leaked to the Otago Daily Times last month Prof Gwynne-Jones said he was tired of fighting managers who ignored or queried his concerns over funding and other matters.

But Prof Gwynne-Jones' frustration met limited sympathy from some in other specialties, because orthopaedics is considered to have fared well from the Government's push for high volumes of elective surgery.

Other specialties feel ignored and underfunded and reject claims they are less efficient than counterparts in other health boards.

Appointing Mr Woodhouse, a former Mercy Hospital chief executive, would generate local interest and possibly more friction, but both men are likely to follow the same line with the southern board as that adopted by departing health minister Tony Ryall.

And that is a firm insistence the board is not underfunded, despite questions remaining unanswered over whether population-based funding adequately compensates for its huge geographic size and older population.

University of Otago academics concluded in a 2012 review the funding formula was not transparent, meaning it was hard to tell whether boards received fair funding.

Board member Richard Thomson sounded cautiously optimistic when contacted by the ODT.

He expects some sort of resolution of the board's ongoing funding woes, but is not sure exactly what form it will take.

''I don't personally believe that we can go on and on and on with multimillion-dollar deficits.''

Like Mr Hunter, he believes the board must get its house in order first in order to be viewed with more confidence by the Government.

''I don't wish to be misconstrued - I'm not suggesting that everybody sitting down and passing the talking stick is the solution to all our problems,'' Mr Thomson said.

Mr Thomson has previously spoken out about the likely price tag of $200million or more for the new Dunedin Hospital, which will cost the board a great deal in financing costs.

He estimates a $40million annual funding gap by adding the board's operational deficit to the likely finance charges - a huge amount of money for the health board.

''I personally have concerns that the funding figure just to me doesn't feel right.

''The gap is so significant that it's hard for any of us to see that we can bridge that gap easily, and tinkering around the edges is certainly not going to do it.''

The former Otago health board chairman has seen many attempts to fix the board's woes.

''In my time I have lost count of the number of people who have been sent down to find the missing millions, and none of them ever have.

''And please - I don't want that to be construed as we shouldn't be doing better with what we've already got.''

Julie Morton, of the Public Service Association, said the board appeared to have ''gone to ground'' in the past three months or so, and she was finding it difficult to contact some senior staff members.

''That withdrawal of engagement with us, on anything at all, is not a good sign.''

The union was fighting battles it had not had before with the board, such as gaining approval for mandatory staff training.

''It has got to a critical stage. In 10 years I've never seen it like this.

''Our general relationship with the DHB is probably at an all-time low.''

''It just needs to stop, and somebody with leadership needs to make it stop.

''The amount of hands that various things need to go through to get actioned is ridiculous.''

Lack of leadership is constantly cited as the chief problem - but Ms Heatly has tended to avoid criticism, which is usually directed at her senior leadership team.

The former English National Health Service chief stepped into the role in March 2012.

''Although there is goodwill towards Carole, people are saying: `Why doesn't she fix this leadership problem?','' Mr Powell said.

''What people are frustrated about is she's not dealing with the problems that are immediately below her in terms of the style and the culture and the calibre of leadership there.''

In an interview, Ms Heatly defended her management style and her senior leadership team, but acknowledged communication with senior doctors must improve.

Part of the problem was remaining visible in a large organisation.

As a former nurse, being among health staff was her ''natural habitat'', but there was not always enough time.

If anyone had trouble contacting senior staff members for important business, they should contact her directly, she said.