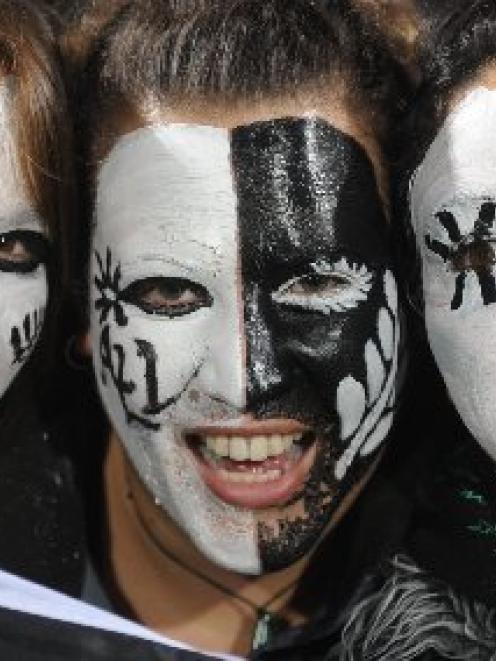 All Black supporters from left Liana Chen, Willow Folwell and Renata Burt, students of Dunedin, enjoy the test. Photo by Peter McIntosh
If All Blacks supporters were thinking "not again" on Saturday night, then Dunedin businesses were rubbing their hands together after the weekend's test match brought people flooding into the city.

Carisbrook was sold out for the All Blacks game against France, with the crowd official estimated to be 28,500.

Dunedin police had a busy night with 35 arrests, mainly for disorder offences.

But it was like a "standard busy Saturday night", Senior Sergeant Brian Benn said.

Otago Chamber of Commerce chief executive John Christie said "millions of dollars" would have been spent in the city, with the hospitality sector, in particular, benefiting.

A row of tents, called The Octagon Village, set up by the owners of four Octagon bars, reported a bumper night on Saturday.

Takings were slightly up on takings during last year's All Blacks v Springboks match, which he said at the time were the highest takings since the bar and restaurant opened in the Octagon in 2002.

The Octagon Village was something which people now expected after an international game, he said.

However, the idea for a French piazza in George St's Edinburgh Way seems to have been a flop.

Mou Very proprietor Olivier Lequeux said the area was "dead" and everyone seemed to be heading to the Octagon.

He had a group of French people at his bar, but aside from that the area was quiet.

Motel Association of New Zealand Otago president Neville Butcher said the rugby weekend had come at the perfect time, with June normally a quiet month for moteliers in Dunedin.

Many motels were booked out for the weekend and much of the accommodation had been booked in advance, a positive sign for moteliers.

Most people were staying on for more than one night and many were enjoying Dunedin with "perfect weather", he said.

Otago Rugby Football Union marketing manager Chris Green said the night ran smoothly at Carisbrook apart from a fully clothed person running on to the field and another pitch invader about 30 minutes after the final whistle.

Mr Green said he had not heard about bottles being thrown at the French team as players did a victory lap to celebrate its 27-22 win.

Tourism Dunedin chief executive Hamish Saxton said it seemed visitors had come to the city for more than just the "two hours" of the rugby game.

The Dunedin City Council and rugby union had worked hard to "create a buzz", something which he believed had been achieved.