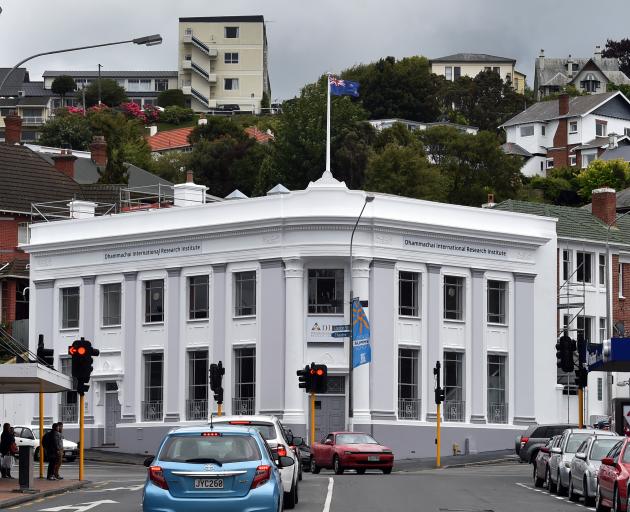 The Dhammachai International Research Institute, in the former BNZ building in Dunedin. PHOTO: PETER MCINTOSH
An international Buddhist research centre has opened in Dunedin, enabling academic links with the University of Otago to be further developed.

The Dhammachai International Research Institute of New Zealand and Australia, which is housed in the former BNZ building at the corner of London and Pitt Sts, was formally opened earlier this month.

The independent research centre is funded by the 60th Dhammachai Education Foundation of Australia and New Zealand, which was established by the abbot of a large Buddhist temple in Bangkok, Thailand, in 2004.

The institute promotes and supports the study of early Buddhist manuscripts, their preservation and other Buddhist studies.

Associate Prof William Sweetman, who heads the Otago theology and religion department, said a third five-year memorandum of understanding between the university and the foundation was signed last year.

Since 2007, the foundation had funded a lecturer's salary in the Otago religion programme, partly funded another part-time lecturer and provided full scholarships for Thai students, he said.

A new course-work MA in Buddhist studies would be introduced next year, to be taught by Otago staff but with one paper taught each year by a distinguished international scholar of Buddhist studies.