Build-up for Orientation under way 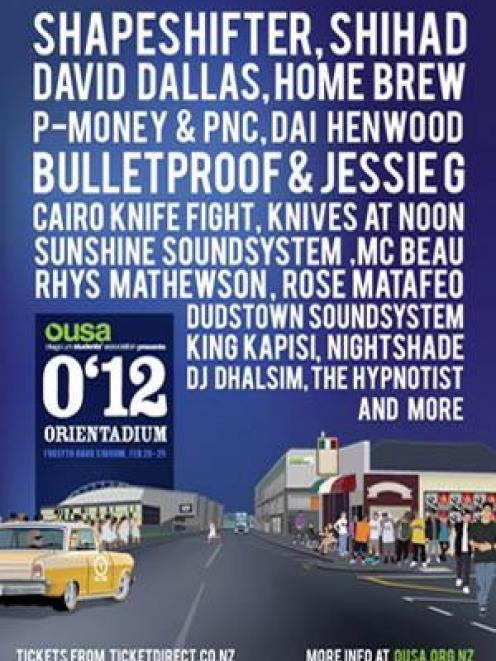 This year's Orientation has a more inclusive approach between the event's traditional planners, the Otago University Students' Association and new partners the University of Otago and Dunedin City Council.

Dubbed "Orientadium 2012", the February 20-25 roster of activities will be centred around several concerts being held for the first-time at the multi-purpose Forsyth Barr Stadium.

OUSA events co-ordinator Kitty Brown said there had been an increased participation and interest shown in Orientation by the various university departments and residential accommodation halls, this year.

A recent open session briefing about what is planned for Orientation had been attended by more than 50 people, a significant increase compared with previous years, and predominantly made up of university staff, she said.

A second briefing is scheduled to include staff members of the police, Dunedin Hospital, and the DCC, she said.

A more "collaborative" approach was being promoted as part of Orientation, she said.

Billed as "the biggest O Week in New Zealand ever" the OUSA event, also includes an academic component, which is being run by the university, alongside DCC-organised city tours for new students.

The three partners will also hold an official welcome ceremony at the Stadium as a key part of Orientation.

A $5 million redevelopment of the University Union building and lawn has been the catalyst for Orientation to branch out to several new venues.

The Museum Lawn reserve will be the new site for most of the daily activities throughout the week, where live music will be performed and competitions also held.

Ms Brown said more than 20 people have registered to enter the "Fresher Comp" - a contest which puts new students through a series of oddball and often embarrassing activities.

The university-organised "Parent Ori" will be held on three consecutive afternoons at the College of Education lecture theatre to provide information to parents of new students.

Prospective and returning students have been sent a letter for their parents from Otago vice-chancellor Prof Harlene Hayne to welcome them to the event, while the correspondence has also included a copy of the university's code of conduct, a spokeswoman said.