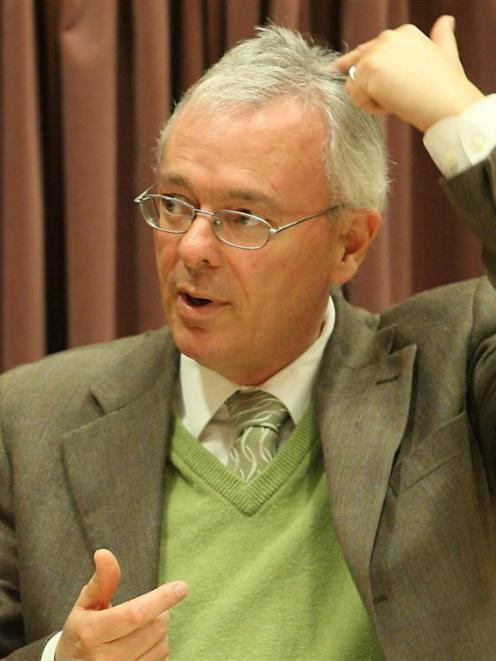 Peter Ross, a forensic scientist for the Victorian Police Forensic Science Services, gives evidence on the sequence of shots that killed Laniet Bain.
The bullet that caused a fatal wound to the top of Laniet Bain's head passed through a fabric-covered object before it entered her skull, the High Court at Christchurch heard yesterday.

And another lead fragment on a jacket on a nearby chair was impregnated with several cotton fibres as were three of the four lead fragments recovered from Laniet's brain. That was consistent with them having passed through a raw cotton fabric.

The fragments outside the body were obviously part of the expanded rim that had torn away from a hollow-nosed bullet which had distorted on impact, Mr Ross said. That suggested to him there had been something between the muzzle of the rifle and the top of Laniet's head where the bullet caused a large hole.

And while the contact surface was made of cotton fabric, the object itself was substantial, perhaps a cushion or an upholstered object because contact with a layer of cotton fabric would not cause distortion of the lead.

But he had not seen anything from the scene which could have been used as the intermediary object, Mr Ross said. It was possible it could have been overlooked or taken away.

It was also possible the two bullet fragments found outside the body could have resulted either from the impact with the cotton object or the contact with Laniet's skull.

But unlike the fragments recovered from the brain, there was no biological material on those two fragments so neither of them could have been pushed out of the wound by "back blast" - the pressure effect of the bullet entering the skull as suggested by Crown pathologist Emeritus Prof James Ferris.

Considerable force would be needed to propel lead, a dense material, as far as the jacket on the chair although it was possible a small fragment could be forced out by the "piston" effect of the second wound to the side of Laniet's head.

"The problem is how far it would travel," Mr Ross said.

Something like blood, which was much less dense would travel further and would explain the blood spatters in other parts of the room such as on the wardrobe mirror at the foot of the bed and near the bottom of the window.

And, contrary to what the three Crown pathologists told the jury, Mr Ross said he believed the large wound to the top of Laniet's head was the first of the three gunshot wounds inflicted on the 18-year-old.

He based that on the physical evidence at the scene, taking into account the distortion of the bullet, that nature of the wound, the lead fragments and the nature of the blood splash.

The Crown says the cheek shot was the first of the three wounds and that Laniet would have survived that particular wound but would not have survived either of the other two for very long.

"She may have seen the shooter as he could only come in the door," Mr Ross said.

Laniet then slumped back and was shot above her left ear and in the left cheek. As she was falling, but before she hit the pillow, one of the fragments of lead landed behind her. It was clear from the flow of blood across her face that she did not move again.

Mr Ross said he disagreed with the Crown witnesses about the shot to the top of the head being a hard contact shot.

Because of the cotton fibres on the lead fragments, it was clear there was something between the muzzle of the gun and the wound and that could have soaked up any blood that might otherwise go back into the barrel or the muzzle.

Asked about the "gurgling" sound David Bain said he heard from Laniet on the day of the killings, Mr Ross said such sounds could occur even after death. He told defence counsel Helen Cull QC of an experience early in his career when he had been preparing to take a sample from a suicide victim about an hour after the death.

The "dead" person suddenly made a noise like a groaning exhalation of breath. He was concerned about whether the woman was actually dead but the doctors told him she was, that "It happens", Mr Ross said.

To Crown counsel Cameron Mander, Mr Ross agreed he had been convinced the woman was alive and needed medical assistance.

And he also agreed that contact with a piece of cloth would not have caused distortion of the bullet fired into the top of Laniet's head. But it might have caused it to "yaw" or to tumble if its progress was further disrupted.

Mr Ross agreed a logical theory was that Laniet could have been upright, her head lowered "as if getting out of the bed" when she was shot in the top of the head. But he agreed there appeared to be no disturbance of the duvet on the bed.

He said his description was "merely to present an image" of the type of movement likely for Laniet to have been upright and for her head to have been facing the shooter.

"If she was aware the shooter was in the room, she may have been trying to dodge him," Mr Ross suggested.

"Whether it was your brother or your father, you'd be pretty worried about someone coming into your bedroom with a firearm and you'd dodge, duck, weave," he told Mr Mander.

He agreed his theory as to the order of the shots to Laniet was dependent on her orienting her head in such a way as to expose the top of the head then not slumping backwards or forwards before the other shots were fired.

"It's just a hypothesis but I believe it's supported by the physical evidence," Mr Ross said.

The trial of David Cullen Bain (37) continued in the High Court at Christchurch yesterday.

The Crown, represented by Kieran Raftery, Cameron Mander and Robin Bates contends Bain murdered the family, using his early morning paper round as an alibi and made it look like Robin shot them before committing suicide.

But the defence, represented by Michael Reed QC, Helen Cull QC, Paul Morten and Matthew Karam, argues Robin was the killer and turned the gun on himself because he was about to be exposed for an incestuous relationship with his younger daughter Laniet.

The trial, before Justice Panckhurst and a jury of seven men and five women, began on March 2. The Crown closed its case on May 6 and the defence began its case on May 8.