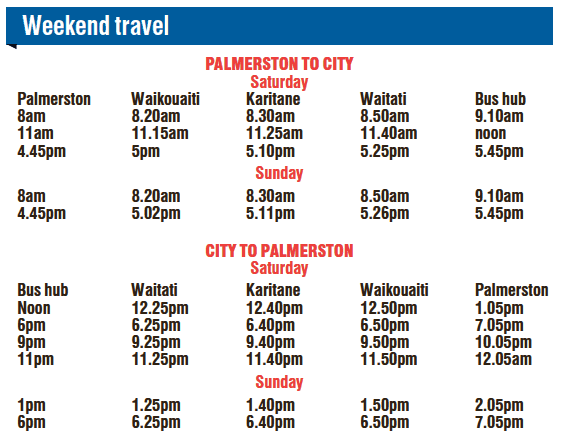 The weekend bus service for Palmerston has been confirmed and will start on May 28.

Residents in Palmerston and other East Otago towns have been lobbying to get the weekend service for years and an agreement has been reached with the Otago Regional Council.

In a statement yesterday, the council said the decision followed a consultation with the Waikouaiti Coast Community Board during which they identified what would best suit the community.

"We’d like to thank Otago Regional Council for working with us to ensure we are getting a service that suits the needs of the community. This means that families can head into town on a Saturday or Sunday for sports games or shopping and won’t have to worry about parking. Feedback indicates that the service will be well utilised in the coming months," Waikouaiti Coast Community Board chairman Alasdair Morrison said in the statement.

"At the moment the return trip costs $2, which makes it the most economical way to get into town."

The proposed service hit a speed bump last year when Waka Kotahi NZTA declined to help fund the project, leaving the Otago Regional Council with a shortfall of $57,000 this financial year. Councillors decided to press on regardless.

The service is the council’s longest route, at 63km one way, and the new weekend service will be fully funded by the regional council.

Council transport manager Doug Rodgers said the council was pleased it could help out.

"The Waikouaiti Coast community have been actively engaged in developing a solution that works for them and we are pleased to be able to help them out. We have received a petition from the Palmerston community which may result in additional improvements to the route," he said.

There are four services on Saturday from the city to Palmerston and three services from Palmerston to the city, also on Saturday. There will be two services each way on Sunday.

The present weekday route operates from Monday to Friday having three services to the city and back. It is aimed at morning commuters, school pupils and afternoon commuters. The service goes through Waitati, Karitane and Waikouaiti.

A petition has also been lodged with the council about expanding the service in Palmerston having the bus do a loop of the town rather than leaving from the railway station.

So what are the success criteria being placed upon this service? Is the target 5 passengers per service each way or some other number. What will the trigger passenger numbers be to add or reduce services?
I feel it will only be a few months and we will be told patronage is low because there aren't enough trips in each direction.

People have to use it or lose it.
That goes for all public transport