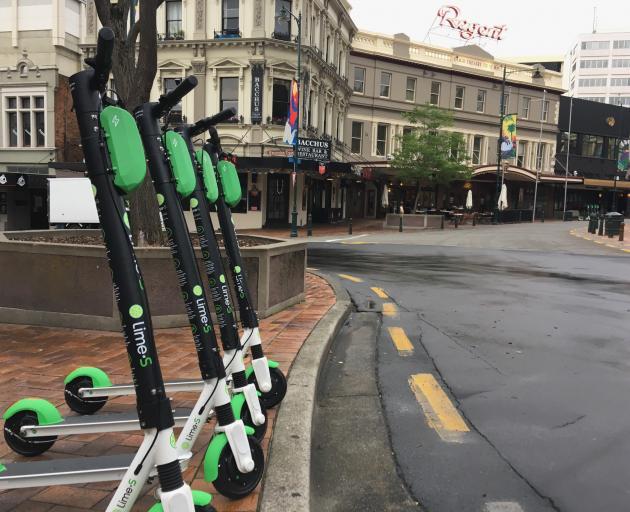 Councillors will vote on a raft of changes around licensing and use of e-scooters today. Photo: James Hall/ODT
New rules for Lime scooters in Dunedin are set to come another step closer when Dunedin city councillors meet tomorrow.

Councillors will vote on whether a revised bylaw - including a licensing system for e-scooter companies, restrictions on operating hours and locations and penalties for companies that fail to comply - is the right approach.

If approved, council staff would then press on with a review of the city's existing mobile trading and temporary stall bylaw, which set the rules for such operators, a council staff report said.

That was expected to lead to a revised bylaw being drafted and presented to councillors before the end of the year, followed by public consultation.

The move comes after the Dunedin City Council voted in March to start an early review of its mobile trading bylaw, not scheduled until 2024, to give it greater control over e-scooters.

Councillors at the time asked for a report on mechanisms available to control e-scooters on footpaths in busy pedestrian areas such as George St.

Since Lime's service launched in Dunedin earlier this year, the company has been able to operate without a licence, permit or payment, although it did sign a memorandum of understanding with the council.

In Auckland, the company was required to have a licence from the council and had to pay a fee.

The arrival of the devices in Dunedin has divided public opinion. They have proved popular with riders but have run into opposition from people worried about pedestrian safety.

The company has been under the microscope since then, and in February temporarily pulled its scooters from streets, including in Dunedin, after its licence to operate in Auckland was temporarily suspended amid safety concerns.

At the time, the company disclosed 155 "irregular braking" incidents - 92 of them in Auckland - which had caused injuries to 30 riders.

Twelve of the incidents occurred in Dunedin, causing injury to three riders.

The scooters were back two weeks later, after the glitch was resolved and agreements reached, including to report serious incidents and mechanically inspect scooters at least once a week.

The DCC staff report, to be considered tomorrow, recommends a revised bylaw as the "most appropriate way" to control e-scooters, as well as other mobile traders.

At present, the council had no legislative power to hold Lime to any conditions designed to alleviate public safety concerns in Dunedin, the report said.

The revised bylaw could address that through a licence and conditions - for example, stipulating the areas and hours the devices could be used in.

The council was also lobbying the NZ Transport Agency and Ministry of Transport to take a national approach to helmets with e-scooters, as well as their use of cycleways and speed limits.

The NZTA responded in April, saying a regulatory package was likely to be ready for public consultation later this year.

The DCC's bylaw changes would also need to be "open enough" to accommodate future technology, such as Segways, drone delivery systems and other e-vehicles, the report noted.

It would also need to accommodate the rising demand for other mobile trading sites - such as street food vans - as the city grew, it said.

That included looking at the feasibility of exemptions in previously restricted trading areas, such as George St and the Octagon, when they were pedestrianised for particular events, it said.

What's difficult? Just get them off the footpaths and onto the roads where they belong.

While welcome this should have been done before the introduction went ahead. There is a very interesting article here about the issues in other parts of the world
https://www.theguardian.com/cities/2019/jul/15/invasion-electric-scooter...

As a late night taxi driver, the issues with Lime scooters aren't all to do with pedestrian safety. Given the riders are generally wearing dark non-reflective clothing and the scooters have a woefully inadequate rear light, it's only a matter of time before one of them swerves into the path of a car. The riders late at night are often well over the drink drive limit, and have no fear or care.