Campaign to save physio pool 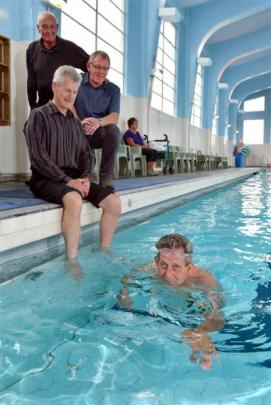 The pool that has benefited thousands of people now needs the public's help.

The pool serves a wide cross-section of Dunedin's community, and it is hoped organisations, clubs and workplaces throughout the city will become involved.

It is the city's only heated therapeutic pool catering for rehabilitation.

It also attracts users who like its central location on the Dunedin Hospital campus.

The trust hopes to increase the number of casual visits while maintaining a focus on rehabilitation and therapy.

The pool would have closed at the end of last year after the Southern District Health Board withdrew funding, but supporters rallied and secured a six-month reprieve to June 30.

This gave the trust time to assess the future and devise a plan.

The pool needs $1 million in capital upgrades and $500,000 in operational funding.

This would cover the pool's capital investment needs for at least a decade.

It would remain owned by the health board, under a long-term lease to be negotiated.

When the pool's plight was revealed in the middle of last year, an outcry ensued from physiotherapists, disability groups and the wider community.

In addition to the public campaign, the trust was applying for grants from funding bodies, Mr Martin said.

The fundraising tally is already $70,000, the Bendigo Valley Sports and Charity Foundation has given $50,000, and other early fundraising comprised the remainder.

It is the second $50,000 donation from Bendigo, which gave the same amount earlier to give the pool the extra six months.

Swimming has been part of his long-term recovery, after he broke his neck in a motor scooter accident in Singapore in 1977.

''It gives you the ability to exercise in a weightless condition where you don't do damage to joints,'' he said.

Mr Daniel jumped in the pool at the request of the ODT photographer this week, and after the photo shoot did his laps.

He was amused to be asked by a few fellow swimmers ''what was I doing there at that time of the day''.

They were used to seeing him at a different time.

''We all look after each other in many ways.''

''It's such a fabulous environment for understanding.''

Mr Daniel, who lives at Purakaunui, said it was important for people to realise just how crucial the pool was for the health of the community.

''Here's the thing: I believe I'm where I am, doing what I am doing, and it's all to a large degree on having this kind of facility.''

In part, it hopes to increase the numbers by attracting more students.

Outside public session times, the pool is used by groups such as the Otago Phoenix Club (former cardiac patients) and Special Olympics athletes.

The water is heated to 35degC and the pool has a hoist for swimmers who need help getting in and out.

The planned works could be staged over a longer time if fundraising took longer than expected.

It is hoped most, if not all, of the upgrades could be completed in one year.

Built in 1946, the Mason and Wales-designed building is part of Dunedin's architectural and medical heritage.

It is still used for its original therapeutic purpose, which keeps alive the shift the pool signalled towards exercise-based therapy.