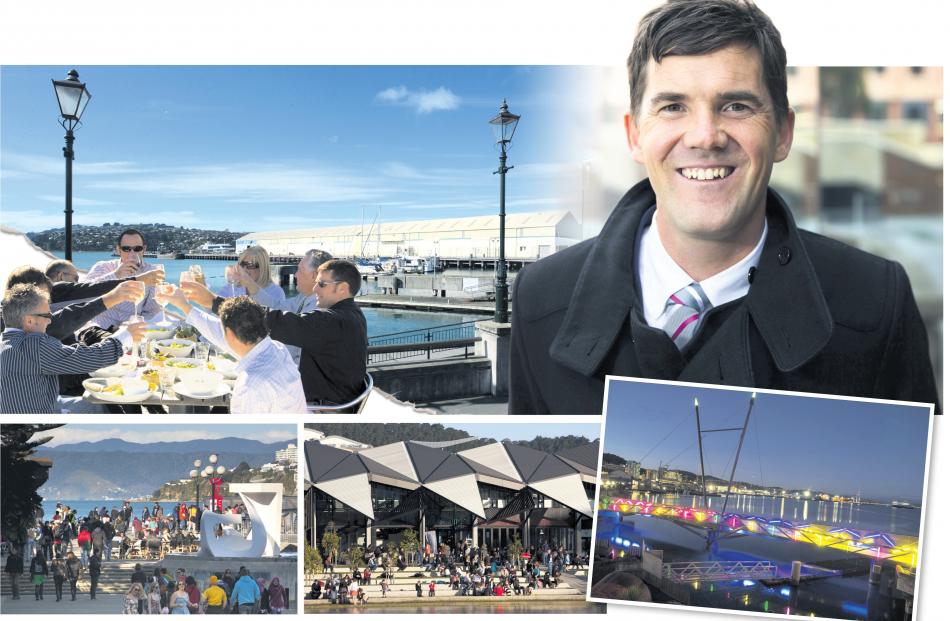 Dunedin's Steamer Basin waterfront (above left) has the same potential as Wellington's to become a vibrant home for cafes, bars, apartments and public spaces, according to Wellington deputy mayor Justin Lester (pictured, right), who helped drive the...

Dunedin can follow in Wellington's footsteps and turn its waterfront into the city's crown jewel, according to a key figure in the capital's transformation.

If Dunedin's waterfront is to be transformed, an example of how to do it can be found in Wellington.

There, Dunedin would find an example of what can be achieved in another sometimes cold and windswept city that has regenerated its waterfront since the late 1980s.

What was once an industrial port with dilapidated wharves, sheds and warehouses has become the capital's bustling hub of hospitality and public spaces.

Cafes, bars and restaurants now sit alongside apartments and hotels, and also parks, walkways, art installations and a heritage trail.

The result has been a crowd-puller, as thousands of people descend on the area, or pass through it while heading to and from work, each day.

The conversion has not come without a fight, as divergent views over development collided in the Environment Court.

But the results show the way for Dunedin, and what can be achieved, Wellington deputy mayor Justin Lester told the Otago Daily Times.

And Mr Lester should know - as a Southerner, born in Invercargill and educated at the University of Otago, he was intimately aware of Dunedin's slow growth and stormy southerlies.

He was also well versed in Wellington's transformation, having sat on the board of Wellington Waterfront Ltd, the organisation that drove much of the capital's waterfront regeneration.

Mr Lester, speaking this week, said Dunedin's waterfront was exactly where Wellington's was in the early days of transformation - a dilapidated industrial area and ''a massive big car park''.

The capital's waterfront was now the jewel in the city's crown and the potential for Dunedin to follow suit was ''exactly the same as for Wellington'', he said.

''It would become the jewel in the crown for a recreation space in the city,'' he said.

The key to progress would be for organisations with interests in the area - the Dunedin City Council, Otago Regional Council and its companies - to work together, he said.

The public would also need to be engaged and have input to ensure whatever developed was for them, he said.

''If it's just about development, then people won't use it.''

Done well, waterfront development would add another precinct to the city, connected to Forsyth Barr Stadium, the warehouse precinct and central city, and enhance all three, he said.

''It may ... take a little bit longer. It might be on a smaller scale initially, but you imagine how beautiful it could become.''

In Wellington, regeneration began when land previously locked away from the public by the Wellington Harbour Board was passed to the Wellington City Council, when the two bodies merged in 1989.

That was followed by the creation of Lambton Harbour Management, later renamed Wellington Waterfront Ltd, a council-controlled organisation that was to drive much of the redevelopment.

The Wellington Waterfront Framework, agreed after 18 months of consultation spelled out the areas to be developed, and private sector developers were invited to tender for each project, he said.

The council signed off the work programme each year and also allocated funding. Money from sales and long-term leases was also used to pay for public spaces between each project, he said.

There was also a ''really important focus'' on design, through a technical design group of architects, and the most financially attractive proposals were not necessarily preferred, he said.

Mistakes had been made, and opposition, including from a watchdog group called Waterfront Watch, had lead to a series of costly Environment Court appeals.

''We now have this unique waterfront that has extremely high levels of approval and satisfaction, and it's a cornerstone of what makes Wellington a great city,'' he said.

If Dunedin could follow Wellington's lead, and get key parties represented on the waterfront to work together, ''there's no reason why it can't work'' in the South as well, he believed.

While land ownership was ''messy'' in Dunedin, it was still largely held by the Otago Regional Council and its companies, which was ''no different to what we've got in Wellington'', he said.

The key would be the creation of a dedicated, development-focused agency, preferably led by the Dunedin City Council, to focus on the area's future, he said.

''If you've just got an arm of council, it's very difficult for there to be consistency and a determined approach.''

Wellington's waterfront had benefited from drawcards like Te Papa, but an Otago Regional Council waterfront headquarters, or a University of Otago aquarium, could serve the same purpose, he believed.

The council could also invest initially in new open spaces on the waterfront, to draw people in, and consider following Auckland's lead, by offering rent-free periods for businesses taking a risk in the area.

''If you just do it and you start charging rent from day dot, and you don't have a lot of people using it, people won't survive,'' he said.

A bridge connection to Dunedin's waterfront would also be ''helpful, but not essential'', as they were now considered ''a bit of an eyesore'' in Wellington, he said.

Growth rates might mean a slower pace of development, but should not stop it, and complaints about the weather sounded ''very familiar'' to an adopted Wellingtonian.

''Sure, it's a little bit colder down there, but it's probably windier up here.

''It's not something that's going to happen over the course of the next three to five years. It's likely to take 15 to 20 [years].

''Dunedin will need to figure it out for itself . . . it's about investing in the city's future.''