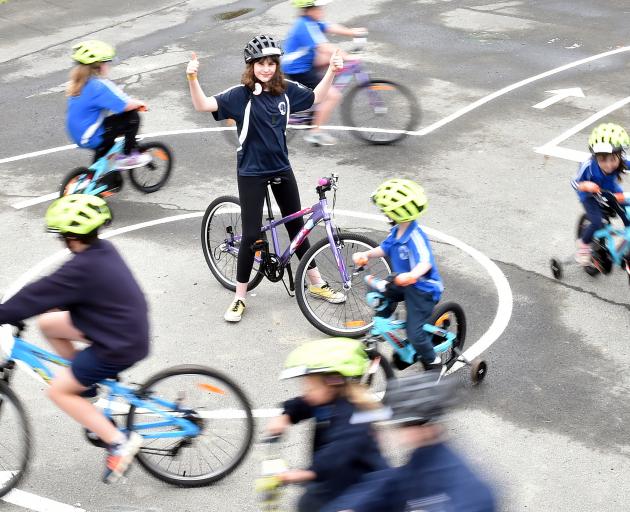 Carisbrook School pupil Ramona Mahutte (13) celebrates the opening of a new bike tracks at the school while young cyclists whizz past. PHOTO: GREGOR RICHARDSON
A little pupil ingenuity went into Carisbrook School's new bike track, meant to get children off the couch and behind handlebars.

The ribbon was cut yesterday for the 280m asphalt track, which loops around the school field.

The school also bought 50 new bikes and a container shed to store them in.

Pupils zipped around the course following speeches by teachers and other involved parties.

Principal Ben Sincock said it was about providing more opportunities for pupils.

"There's a significant number of students in our wider community who don't have access to bikes. This will increase levels of fitness of students."

It surprised him how many students had not learned to bike at home.

"I'd like to see a lot more students cycling to school as opposed to parents dropping them off at the gate."

The project including track, bikes and storage likely cost about $75,000, much of which was raised from various trusts and agencies, he said.

Several pupils had involvement in the project.

Pupil Joel Wilden (13) won a prize at the Otago science fair awards last year, working with the Dunedin City Council and Sport Otago on its design.

He had to navigate issues such as the flood-prone field, and use materials that would not wear.

He also designed a "trickier" part of the track with bumps, but this would have to wait until the school's hall was renovated.