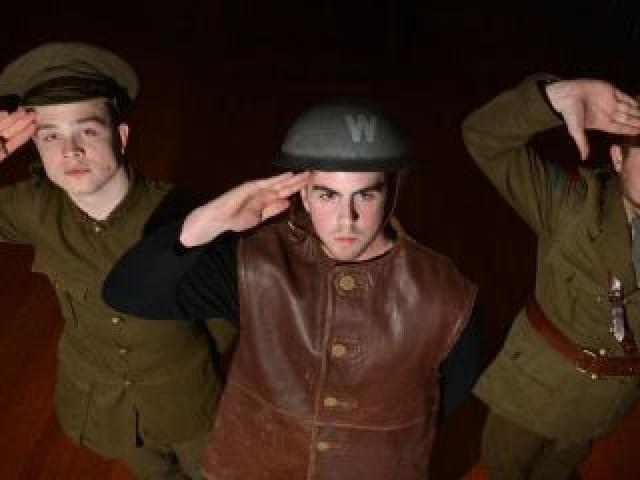 Rehearsing Hamp at Kavanagh College in Dunedin this week are (from left) Elliot Phillips, Robert Monzari and John Trower. Photo by Peter McIntosh.
A dark past will be illuminated by theatre lights in Dunedin next week.

Stageworks will premiere war play Hamp, to mark the 100th anniversary of the Great War, which started on July 28, 1914.

''We wanted to do something as part of the commemorations for World War 1,'' director Bert Nisbet said this week.

''I'm still surprised by how many were killed in that war. It's incredible. It was absolute slaughter.''

The play is set at Passchendaele, in World War 1, where a young soldier is being court-martialled for desertion.

''It's a very moving play, with an outcome that's not great,'' he said.

''There's a court martial involving a guy who had been at the front for three and-a-half years.

"He's a simple man. At age 12, he was working in a mill, like his father and grandfather. Everyone in the cast is an ordinary man with a job to do.

''There are no villains in the play. It's a story about how things were in those days.

"It's easy to look back 100 years and think that was stupid, without understanding how things were in those days.

"The officers were a bit upper crust and the soldiers were mostly volunteers and conscripted men.''

The play has also appeared as a novel, Return to the Wood, and a movie, King and Country.

''It's had various names, for some reason. I think it's been a revelation for some of the younger ones in the cast.

"Some of them had parents or grandparents involved in World War 2, but not in World War 1. It was a very different time.''

Hamp runs on at the Playhouse Theatre from August 13-17.