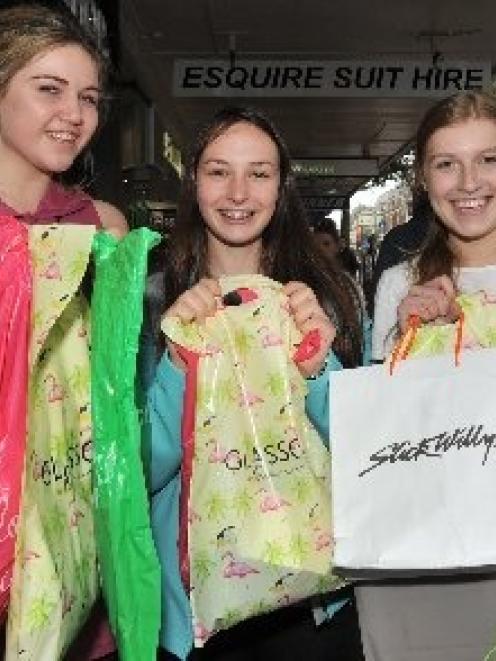 As anticipated, the promise of Boxing Day bargains drove locals and holidaymakers into shops and eateries.

A conservative estimate put about 27,000 people passing through the Meridian mall, although exact numbers were not known last night.

The persistent rain ruled out most outdoor activities in and around the city, and museums and the movie theatre reaped the benefits of a wet holiday.

Two cruise ships, Sun Princess and Dawn Princess, were also in the city, with a combined 3800 passengers and 1800 crew.

The Otago Daily Times spoke to many staff in national retail outlets and local businesses, all of whom reported being very busy.

They thanked the wet weather, cruise ships and Boxing Day sales for the day's profits.

Paymark expected to release figures for Boxing Day spending throughout Otago and the rest of the country in the coming days.

It calculated more than $200 million was spent in Otago between December 1 and Christmas Day. Police urged motorists to be patient as heavy traffic clogged intersections in the city centre.

Cruise ship passengers Helen Miller and Emily Zerella, both of Adelaide, were rapt with the shopping opportunities along George St.

''She's talking about buying another carry-on,'' Ms Miller said of her friend.

As a result, they were not at all disappointed by the weather.

Farmers department store manager Shelly Gilchrist said the rain was bringing a good crowd of shoppers through the doors.

''It's a typical Boxing Day, but with the boats [cruise ships] in too and the rain, what else is there to do in this weather?'' she said.

Emily Mathias, of Dunedin, said the shopping was great.

It was also hard to find a seat in a cafe as shoppers took breaks from their retail therapy and others escaped the rain.

Staff at both Toitu Otago Settlers Museum and Otago Museum said they were ''very busy'' with visitors.

Otago Museum's Francesca Allen said the weather brought many large family groups in as well as a large number of cruise ship passengers.

With Hoyts closed, Rialto movie theatre staff were unsure if the busy day was due to the wet weather, new movies starting, or the lack of competition.

In contrast, Moana Pool staff were surprised at how quiet the pool complex was yesterday.