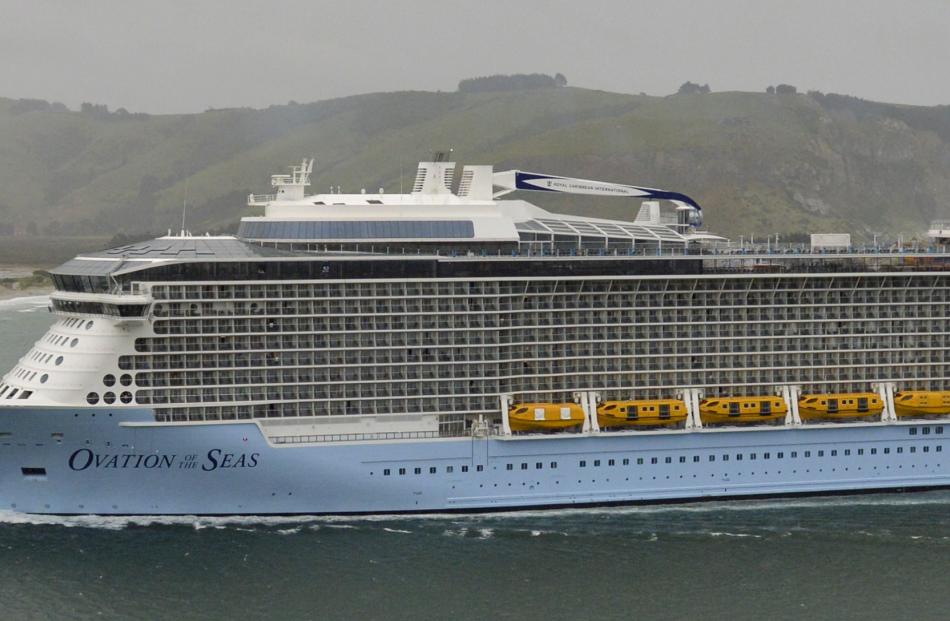 Ovation of the Seas sails through wind and rain into Otago Harbour yesterday morning. Photo by Gerard O'Brien. 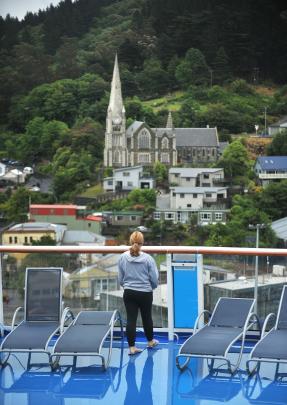 A passenger views Port Chalmers from the stern of Ovation of the Seas. Photos by Christine O'Connor. 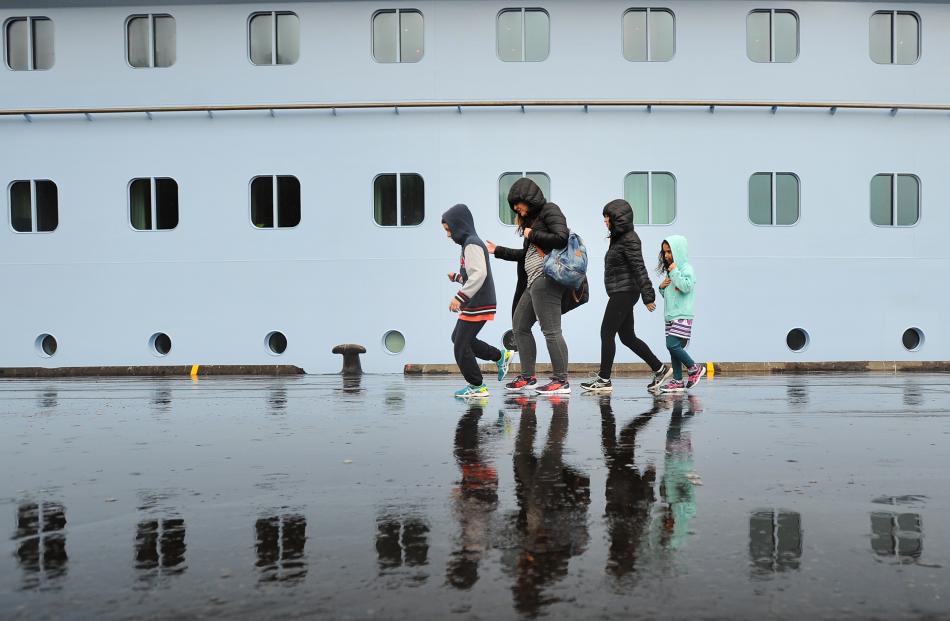 Passengers tread a soggy path past the ship. 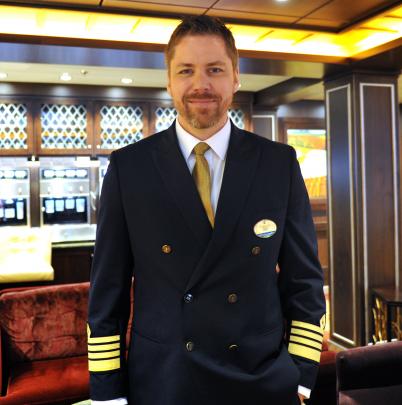 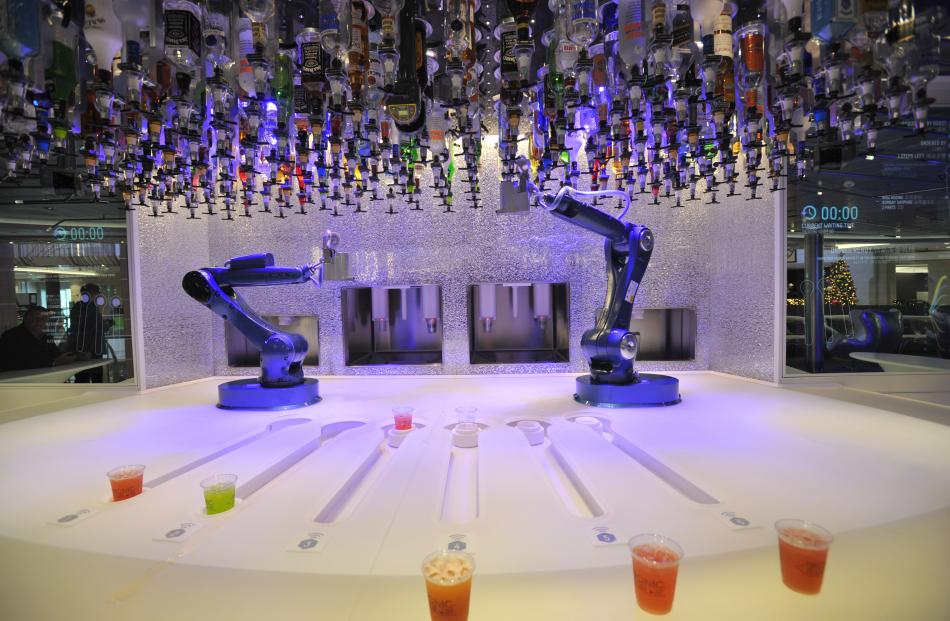 Robot bar-folk prepare drinks from 144 bottles of spirits at their disposal. 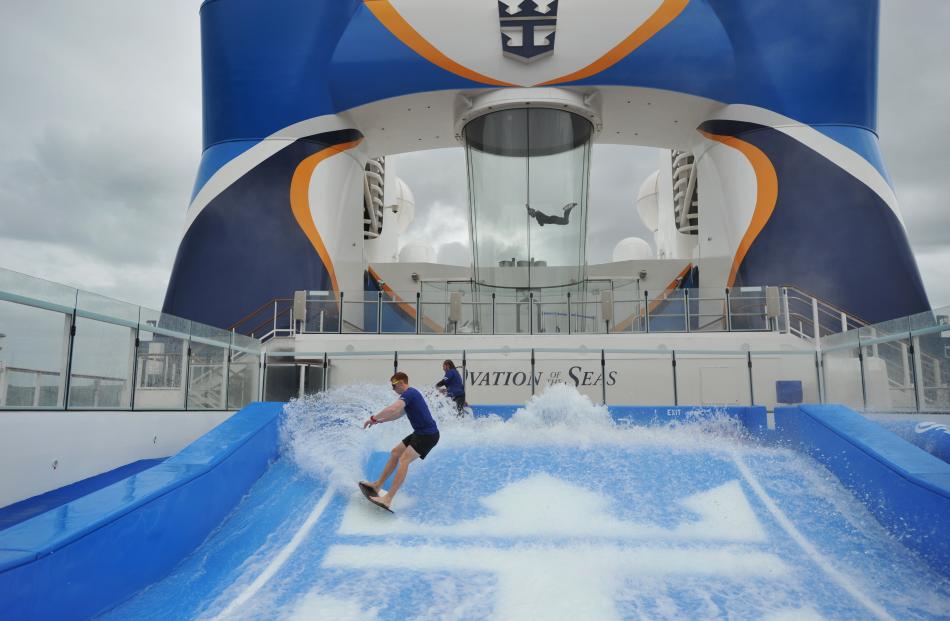 Instructors on a FlowRider surf simulator. 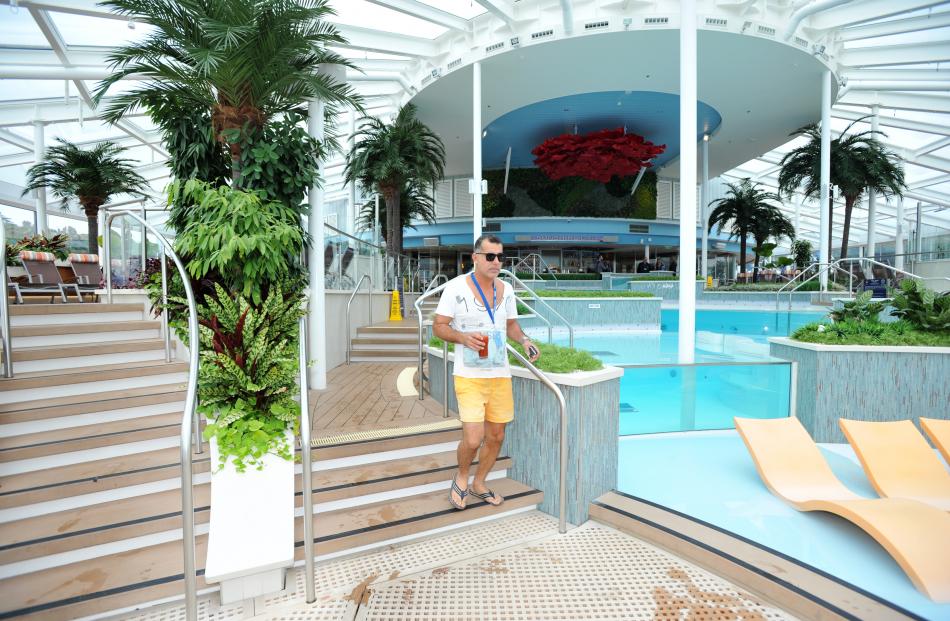 A passenger enjoys the warmth of the solarium. 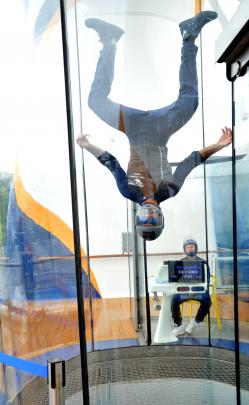 The rain was drifting horizontally past Taiaroa Head as the huge Ovation of the Seas sailed into Otago Harbour yesterday morning.

But the vessel supposedly susceptible to difficult weather silenced concerns about its performance, and its entry to Port Chalmers sparked clogged roads, a packed Flagstaff lookout and a busy Dunedin centre.

The $1.4 billion, 168,666-tonne cruise ship is the biggest to come to New Zealand, and was making its second attempt to call at Dunedin after bad weather off the southwest coast of the South Island scuppered its first try just before Christmas.

The ship carries 4905 passengers, and most took the opportunity to see the sights in Dunedin.

There were lines of passengers outside Cadbury World in Cumberland St, and shops opened to welcome the hordes that headed to the city.

Dunedin Railways chief executive Murray Bond said his 16 carriages on two trains failed to fill but he was ''really pleased'' the ship had arrived.

It showed Dunedin had ample capacity for such large vessels.

At the Flagstaff lookout above Port Chalmers a steady stream of people arrived to view the massive ship, and streets in the usually quiet suburb were blocked with traffic coming and going.

State Highway 88 to the port was clogged with lines of cars carrying people keen to have a good look at the huge ship.

The vessel's captain, Henrik Loy, described the morning as ''challenging all the way'' through the heads and up Otago Harbour, but praised the Port Otago pilots and operational crews for their ''professional'' work.

Its height above water level and limited draft meant the ship could act as a sail, so any winds above an average of 15 knots with gusts of 30 knots meant it would struggle to berth once it approached the wharf.

Ovation of the Seas has 14,000sq m of windage above the water line.

Mr Marshall said inside the harbour there was a constant wind speed between 15 and 20 knots.

Despite that, the ship handled the conditions ''really well''.

Mr Marshall was on board the vessel as it berthed, helping the pilot who joined the ship in Milford Sound.

''It's one of these things you prepare for,'' he said of the experience.

''We've done a lot of research and so on, and a lot of simulation exercises on it.''

Capt Loy, who was born in Norway but lives in the United Kingdom, said he had been with the ship since four months before its delivery last April.

''It's fantastic, very challenging,'' he said of his role.

''It's my profession. It's what I trained for, it's what I do. It is excellent to sail,'' he said of his ship.

He said Ovation of the Seas was the most stable and powerful vessel he had captained.