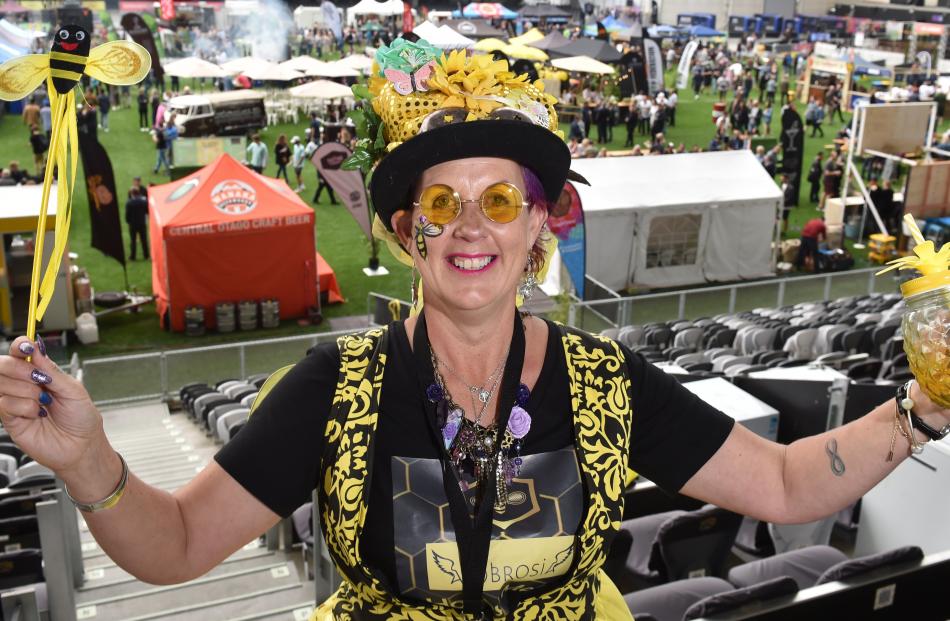 Vicki ‘‘Purple’’ Yarker-Jones promotes honey mead and the cause of bees at the Dunedin Craft Beer and Food Festival. PHOTOS: GREGOR RICHARDSON 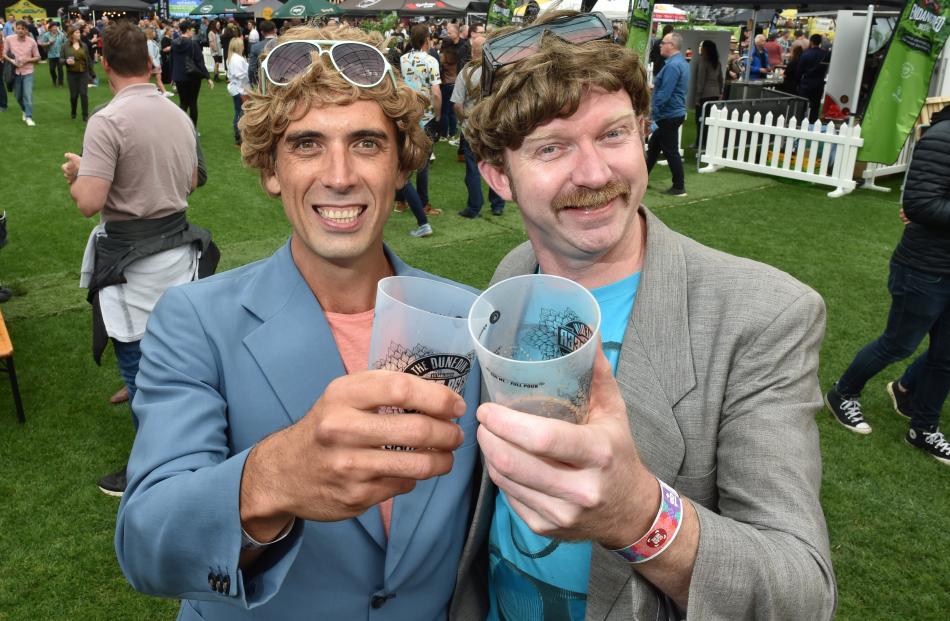 Reuben Page (left) and Josh Preston, both of Auckland, went with a Miami Vice theme. 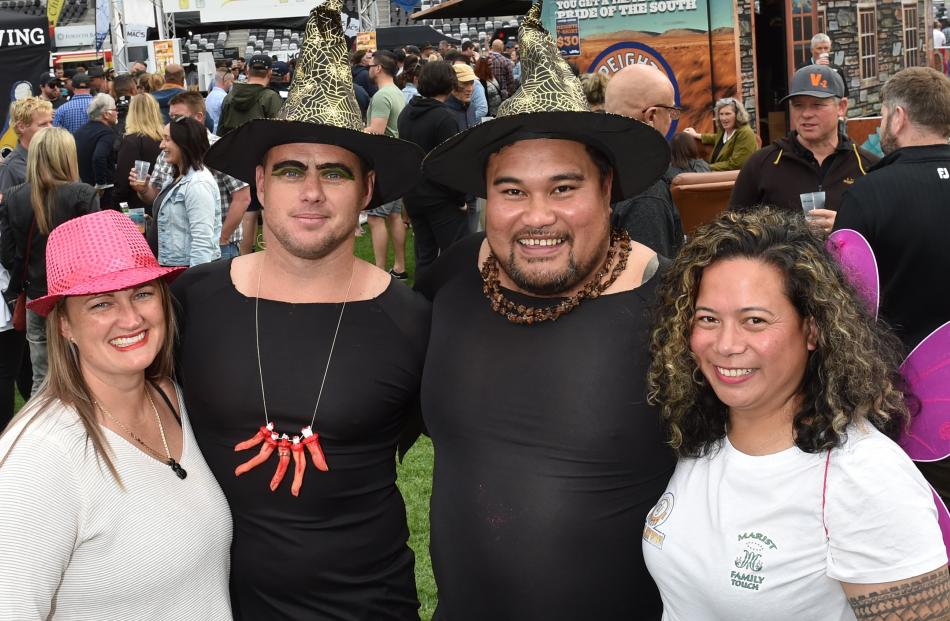 Beer festival patrons (from left) Jaime Ritchie, Gareth Manson, Nuu Vaeau and Ange Vaeau get into the spirit of Halloween. 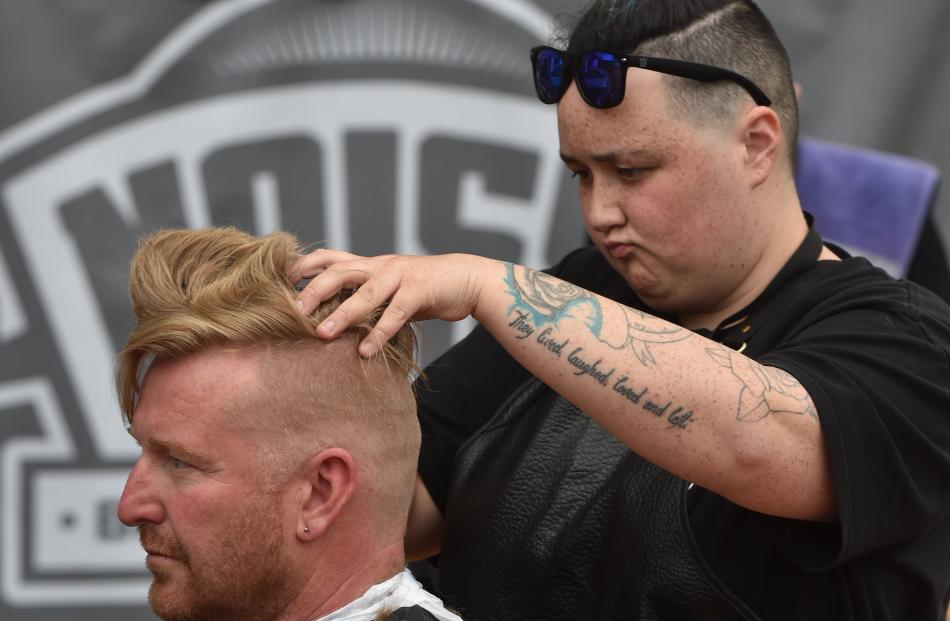 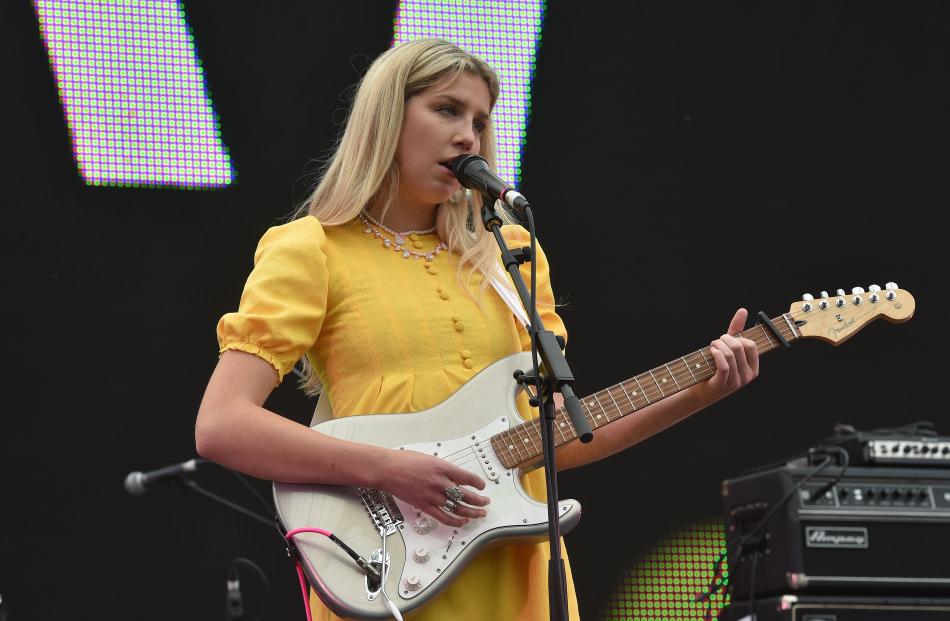 Bexy performs at the festival yesterday. 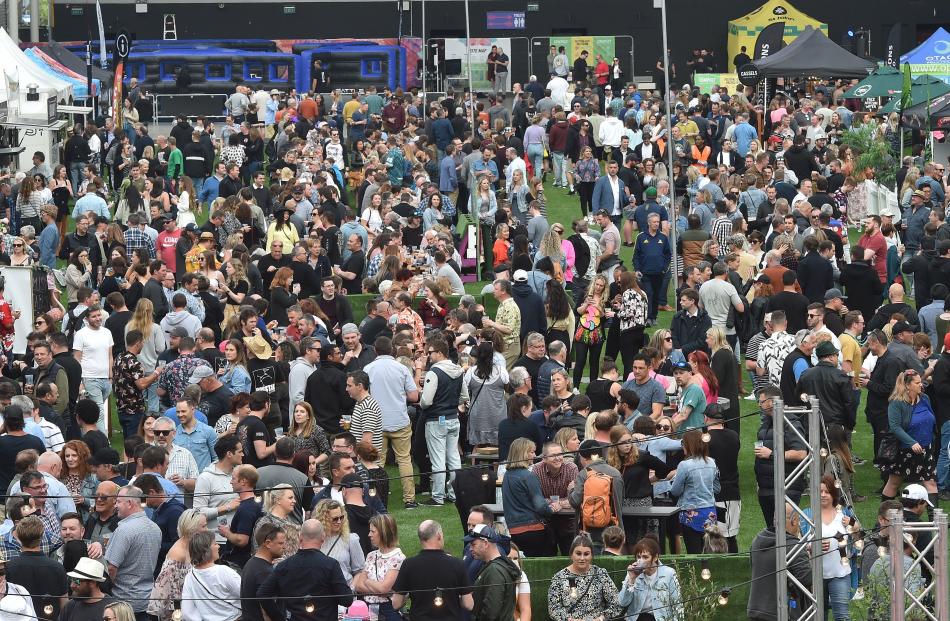 About 6000 people surged through the gates and covered the turf at Forsyth Barr Stadium yesterday at the Dunedin Craft Beer and Food Festival.

Colourful characters graced the opening evening of the Dunedin Craft Beer and Food Festival and plenty more will pour through the gates today.

About 6000 people tried the food and beverages on offer from about 70 vendors at Forsyth Barr Stadium yesterday. Another 6000 - a sellout - are expected today.

Probably the most full-on costume yesterday was worn by brewer and bees advocate Vicki Yarker-Jones, also known as Vicki Purple.

She said it was a huge sacrifice to deck herself out in yellow instead of her favoured purple.

"If you were to go to see the Queen to plead the case for bees, you’d probably wear something like this," she said.

Mrs Yarker-Jones has been growing hops commercially in the grounds of the former St Augustine’s Church at Tuapeka Mouth.

Also a lecturer in nursing at Otago Polytechnic, she said the festival was fun, and the idea was to drink quality rather than quantity. 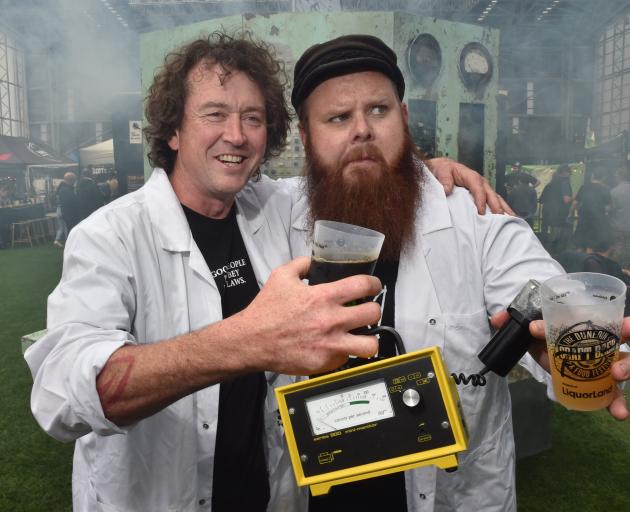 Mad scientists in the art of brewing Tim Ward (left) and Gwilym Breese, from Abandoned Brewery, in Lower Hutt, tested people for radioactivity and offered a range of brews at the Dunedin Craft Beer and Food Festival yesterday. The festival at Forsyth Barr Stadium continues today. PHOTO: GREGOR RICHARDSON
Keri McKay (33), a builder from Dunedin, said his strategy was to "sample as many beers as I can without falling over".

Reuben Page (36), a gardener from Muriwai, Auckland, said he came to Dunedin for a birthday lunch for his older brother Richard Page yesterday.

He then went to the beer festival.

His mate Josh Preston (46), an app developer from Muriwai, recommended a stout from Lower Hutt’s Abandoned Brewery, whose set-up included a Geiger counter and beer that emerged from what appeared to be an old nuclear power plant.

"It looks a bit radioactive, but I think that’s just my glasses," Mr Preston said.

Jeanie Winter (27), who works in human resources in Dunedin, said she was pleased that in a year disrupted by Covid-19, the festival went ahead.